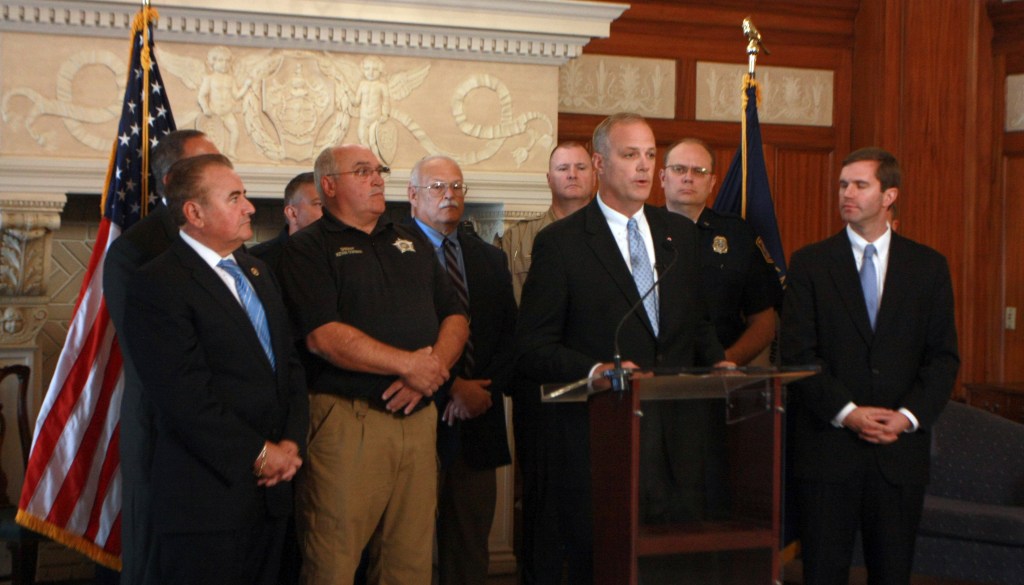 “Make no mistake, it is an epidemic,” Beshear said. “Addiction knows no boundaries and drugs do not discriminate. Every person in every community across this Commonwealth have been touched directly or indirectly by the relentless surge of substance abuse.”

Early Friday, the legislators and law enforcement pre-filed BR 201 in Ashland. The legislation is sponsored by Meyer and Representative Dennis Keene of Wilde.

The bill calls for amendments to state drug laws in order to define the drug and create penalties for dealers of fentanyl and carfentanil.

Carfentanil is an analogue of fentanyl with an analgesic potency 10,000 times greater than morphine. It is used in veterinary practice to immobilize certain large animals, according to the Drug Enforcement Administration.

“We don’t have to tell you the importance of why we are here today, you know why we are here,” Meyer said. “This affects and impacts every family in the Commonwealth of Kentucky and in our communities. It’s time to get serious about this and time to get up and fight.”

Meyer said the bill would regconize that pure fentanyl can be deadly in even minuscule amounts. Therefore, it addresses the definition, classification and the creation of fentanyl and increases criminal penalties for trafficking fentanyl and fentanyl derivatives.

“This bill is very important to me and everyone here with us today,” Meyer said. “This bill is going to continue to allow us to fight.”

Beshear said it only takes one bad batch of heroin or fentanyl to start a wave of overdoses and deaths.

“In Louisville, they experienced 31 overdoses in just a 36-hour period,” Beshear said. “These overdoses have all been linked to fentanyl.”

It’s 30 to 50 times stronger than heroin, and trafficking is growing, Beshear said.

“These officials standing behind me will tell you that dealers say it is easier to distribute and secure fentanyl than it is for heroin,” Beshear said.

The Mayor of Cincinnati announced that the number one issue in the city was the heroin epidemic, Keene said.

“The people of Kentucky are crying for help and that’s what we hope this bill will do, is help,” Keene said. “We hope that this bill will make it harder for these dealers to prosper in our region.”

One reason law enforcement is struggling in the heroin epidemic is due to officers going from overdose to overdose, Waldrop said. He attributed 90 percent of crime in the community to this drug, including thefts, burglaries, robberies and assaults to get money for the drug.

“If this bill can pass, it will help,” Waldrop said. “This drug is not going to stop.”