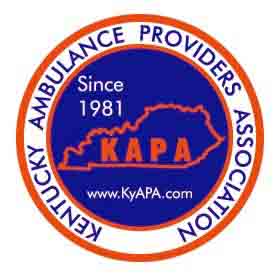 “With Director of the Year, you are recognized for pushing your organization forward in work that you strive to do every day,” Stamper said in a press release. “This year’s Above and Beyond award is even more special because, in my case, it relates to the work done to lead JCEMS after the loss of JCEMS paramedic John Mackey, and our work to push the enactment of the ‘Mackey Bill’ (Senate Bill 43).”

The Mackey Bill was created after JCEMS John Mackey died while on duty in November, 2015. The bill extends line-of-duty death benefits to Kentucky emergency medical services (EMS) workers. It was signed into law on April 1, less than six months after Mackey’s death, according to the press release.

“Janine led the charge to get the bill passed in Frankfort,” Stamper said. “Just days after laying her husband to rest, she picked the mantle up and started fighting for other paramedics and their families. The Presidential Award is KAPA’s highest award, and Janine truly deserved it.”

Because of Jamie, JCEMS has become the gold standard for EMS departments, Stamper said in the press release.

“These awards are evidence that the culture of excellence we are striving to create is working,” Jessamine County Judge Executive David West said in the press release. “When EMS professionals across the state see this, they will know that Jessamine County’s EMS is a department to watch and emulate, and they will know this would be a great place to work and live.”