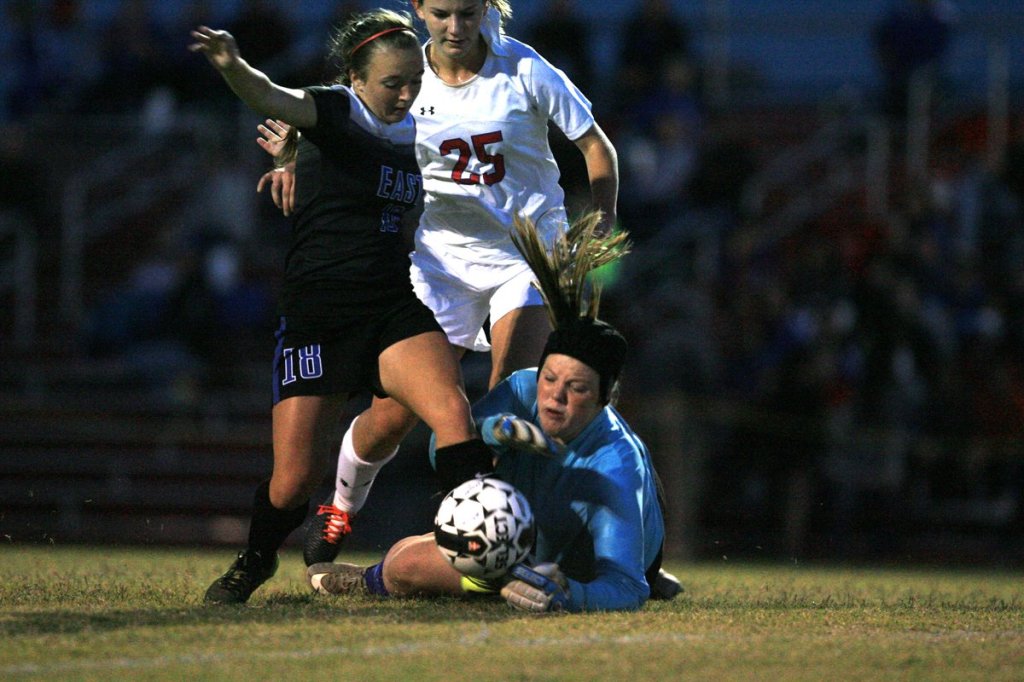 With 14 minutes remaining in the 46th District opening-round game between East and Mercer County girls’ soccer, the Lady Jaguars’ head coach, Zach Welch, shouted to his players from the sideline a simple, yet poignant question: “Who wants it more?”

With the score knotted at one-all, and the season on the line for both teams, East was facing a reality that had clung to the Lady Jags since 2009: Their inability to defeat Mercer in Harrodsburg.

But a goal by East with just over three minutes remaining in the game answered Welch’s question.

The Lady Jags wanted it more.

For the first time since 2014, East returns to the 12th Region Tournament after pulling out a 2-1 victory over Mercer; however, a matchup against state powerhouse West Jessamine now awaits. But before the Lady Jags turn towards a rematch against a team they went winless against this season, they embrace a hard-fought victory against a tough, talented opponent.

“It was frantic the whole game,” Welch said. “Mercer, credit to them, it was a tough game. This was the first win at Mercer since I’ve been here. We knew it was going to be a battle going into it. It’s district time; everyone is going to show up to play …”

From the onset, the game took the form of the previous two regular-season meetings between the two teams: physical and balanced. East went 1-1 against Mercer this season with the margin of victory in both games just one goal (the first meeting went to a penalty shootout).

It was East that drew first blood this time after it jumped ahead of Mercer in the 18th minute when Suzannah Terrazas was tackled in the box by the Lady Titans’ keeper, Kailee Hensly. Sarah Rocco would take the penalty kick, which she easily booted past replacement keeper Savannah Prigmore.

The Lady Jags would then head into the half nursing a 1-0 lead thanks to solid defense and an outstanding effort on the part of keeper Sarah Underwood.

“She’s a shot-stopper. That’s how she is,” Welch said. “She’s fearless coming out. She saved us and definitely helped us out tonight.”

However, Mercer took to the second half with gusto and managed to equalize on a Chelsea Moore goal just six minutes in. With the goal, the pressure began to mount for both teams.

“… It was a nail-biter,” Welch said. “I truly don’t believe we played our best soccer, but we found a way. That’s what these girls saw tonight: You find a way. You don’t play your best soccer and you still figure out a way to do it.”

Mercer had its opportunities to take the lead late, however.

With nine minutes left, Alyssa Howard belted a shot that clanked off the crossbar. That shot attempt capped off a night in which the Lady Titans’ shots were either snuffed out by Underwood or just missed high or wide.

“It comes down to districts and who flat out puts the ball in the net,” Mercer head coach Josh Culver said. “They did it better than we did it.”

Those failed opportunities ultimately spelled the end of Mercer’s season.