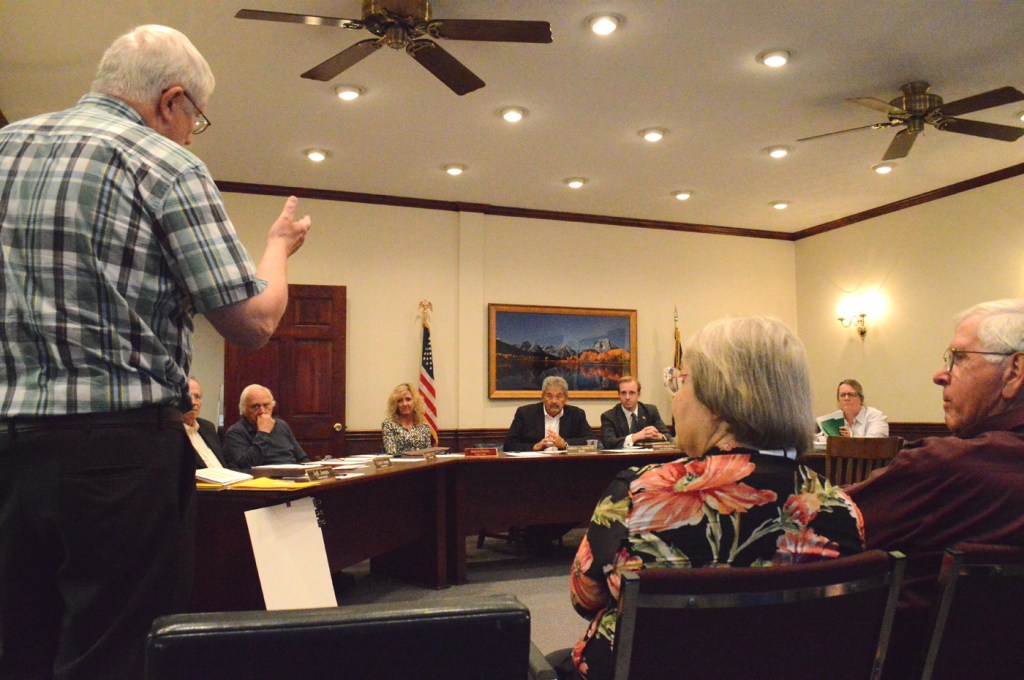 Photo by Tosha Baker Pete Beaty explains the Land Use Map to the city council.

The Wilmore City Council had the second reading on real and tangibile property tax as well as the property tax on all motor vehicles for 2017. None were raised, and one was lowered.

The first reading of the real property tax rate was altered from keeping the 2015 tax rate — which was voted on at the previous city council meeting —  to taking the compensating rate that will generate the same amount of revenue as the previous year. The second reading, which lowered the rate from 22.4 cents per hundred dollars to 22.3 cents per dollar was approved.

The council also approved the second reading to keep the property tax on motor vehicles the same rate as 2015, 21.4 cents per $100.

After the regular meeting, the council went into a working session to discuss what Wilmore will look like in the future.

Magistrates, citizens and many others filled the room to witness and give their opinions.

The Council and the crowd discussed the Land Use Map, and the future land uses in Wilmore.

“We’re on the cusp of a new Wilmore,” said Pete Beaty, chairman of the Wilmore Joint Planning Commission.

Beaty made suggestions such as a downtown revitlaization with new storefront owners and retail areas, an extension of Church Street, or a gas station on the 27 corridor. He also touched on how the new Jack Nicklaus Signature Golf Course and its 550 new living units may impact the city.

Zabilka suggested that the city utilize the agricultural resources Wilmore, has, keep businesses centralized to appeal to the next generation who likes to walk and keep to the small town businesses instead of bringing in cookie cutter ones like Rite Aid and Walmart.

“There is no place else like central Kentucky,” Zabilka said. “It is an incredible thing.”

Other citizens and representatives voiced their opinions on a changing Wilmore, and a long discussion was had. Ultimately some council members were a little more convinced than others.

“Were doing the best we can with what we have,” Councilman James Brumfield said.

Some members said the Land Use Map is fine the way it is, and no changes can really be made.

No action was taken on the matter, and as of now, the Land Use Map remains the same.