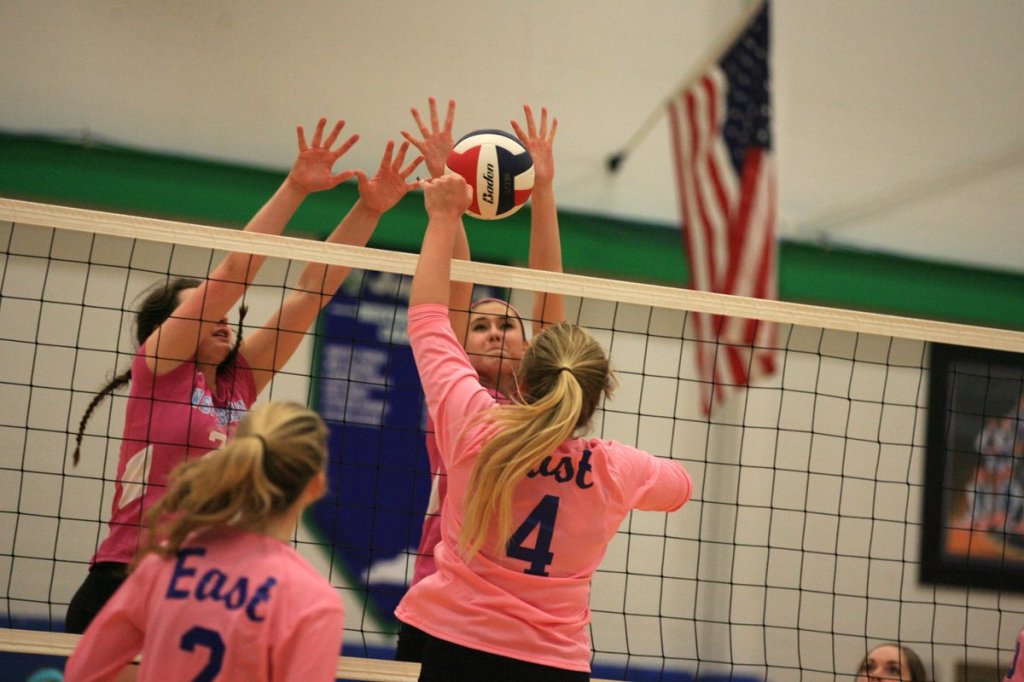 Though they stood on opposing sides of the court, wore different jerseys and competed against one another in the same district and region, the final regular season match between East and West volleyball on Tuesday was more about togetherness than competition.

The the two teams came together within the East Jessamine High gymnasium for the annual “Volley for a Cure” contest, which is an event dedicated to breast cancer survivors.

During the night, there were booths, auctions and special concessions that raised awareness and money for the cause. Through raffle baskets alone, $700 was raised on the night.

“This is my favorite game,” East head coach Megan Miller said of the event. “Not just because of the competition, but because of the environment. To be able to do a little of something for our community makes me appreciate our job.”

Center stage on the night was the final regular season contest between the Lady Jags and the Lady Colts. West, who had defeated East 3-0 earlier this season, continued its torrid run through the regular season with another 3-0 (25-10, 25-9, 25-8) victory over East.

Much like the previous meeting, the outcome was not much in doubt as the Lady Colts controlled all aspects of the match. The Lady Jags, however, placed together several impressive rallies that displayed a promise of what the team can be in the future. For now, West proved to be too tough an opponent for a two-win East team.

The Lady Colts have now won five in a row and 10 of their last 12 games.

“The girls look forward to this,” West head coach Bill Bird said. “This is an awesome event. It’s fun. It’s a great thing for them to come together.”

The teams have an opportunity, once again, to play one another when the 46th District Tournament arrives on Oct. 17, but East will need to hurdle Mercer County in the district tournament opener. The loser goes home, the winner advances into the championship game.

However, the match on Tuesday was a chance to show appreciation, not to fret on wins and losses.