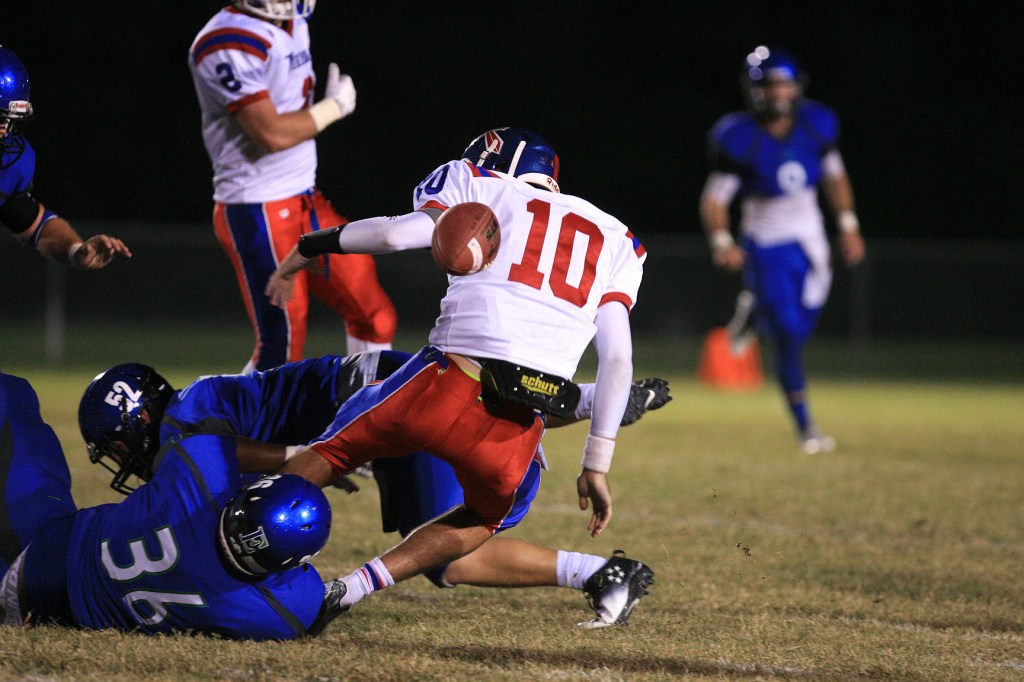 The pain of the heartbreaking 35-41 loss to Western Hills on Sept. 23 still lingered with East Jessamine as it took to the field on Friday to face Mercer County.

The week of preparation had somewhat lessened the pain of witnessing a fourth-quarter rally dissipate as fast as it took Wandale Robinson to scamper 81 yards, but as the game against the Titans progressed, and the score remained painfully close, an air of bitter familiarity crept into the East stadium.

After Mercer scored two consecutive touchdowns late in the third quarter to increase its lead to 27-20, it was hard-pressed not to wonder if East was about to suffer another second-half implosion.

The Jaguars dug deep, gathered themselves and rallied to take their first district victory of the season 30-27 behind a stellar gameplan, resiliency and determination.

“Our kids fought and our coaching staff did an amazing job,” East head coach Mike Bowlin said. “As far as skill kids go, (Mercer) had us outmanned; they had speed everywhere, they had size everywhere and they had a really good defense. Our kids found every possible inch that they could to take advantage of a play.”

The biggest play of the game for East came off a blocked punt early in the first quarter that set the tone for night; however, the fun didn’t truly started until 1:49 remained in the third quarter. That was when East pulled even with Mercer at 27-all after Kyle Gann hit Storm Wilson for a 34-yard touchdown.

The touchdown followed a night in which Gann threw two interceptions (both to Trevon Faulkner). At times, it seemed as if Gann was unnerved as would hold on to the ball longer than necessary, which caused him to take unwarranted sacks.

Though he finished with minus-four rushing yards on 10 attempts, he still managed to go 9-for-14 for 153 yards and two touchdowns.

Gann was helped by the reliability of Aaron Fortenbery (26 carries for 109 yards with two touchdowns) and the playmaking abilities of Wilson, Eric Green, Max Darby and Connor Hearn.

“Connor Hearn is such an invaluable piece of our offense,” Bowlin said of the junior. “He’s such a good player. In my heart of hearts, if I’m going to go down swinging in the biggest game of the year, I’m going to go down with a guy who’s been there everyday … Between him and Fortenbery, and Kyle keeping it on the boots, we had a lot of success.”

After East’s game-tying touchdown, Mercer’s Gunnar Gillis fumbled the ball on its next possession to wrap up the third quarter. The fumble gave East incredible field position at its own 44-yard line to start the fourth quarter.

Mercer’s defense would stiffen its haunches, forcing the Jags to kick a 32-yard field goal that gave them a 30-27 lead with eight minutes left in the game.

The Titans proceeded to march down the field on their ensuing possession, but with four minutes left in the game their offense stagnated, forcing them to attempt a 31-yard field goal.

East still led by three, and as the clock slowly ticked its way down, a funny thing began to happen: Hope started to creep along the sideline and into the stands.

East got the ball back as a result of that missed field goal. The Jags’ drive ultimately stalled before it could run out the clock; however, the Jags still managed to bleed nearly four minutes off the clock.

Mercer now had the ball with less than a minute left with an opportunity to either win or tie.

And much like how East’s season has gone so far, it took until the last play for the Jags to cement the victory.

The final play of the game played out as such: With eight seconds left, and no timeouts, Mercer’s Gillis snapped the ball from the 26-yard line and, finding no one open, scrambled to his right for about 16 yards before he was taken down 10 yards short of the goal line.

“We got outplayed and outcoached,” Mercer head coach David Buchanan said following the game. ” …  We just have to buckle down and work a lot harder. Maybe this will finally get our attention that we have to play a lot better and a lot harder to have a good football team.

For East, the win halted a two-game losing streak.