East football falls in yet another last-minute thiller 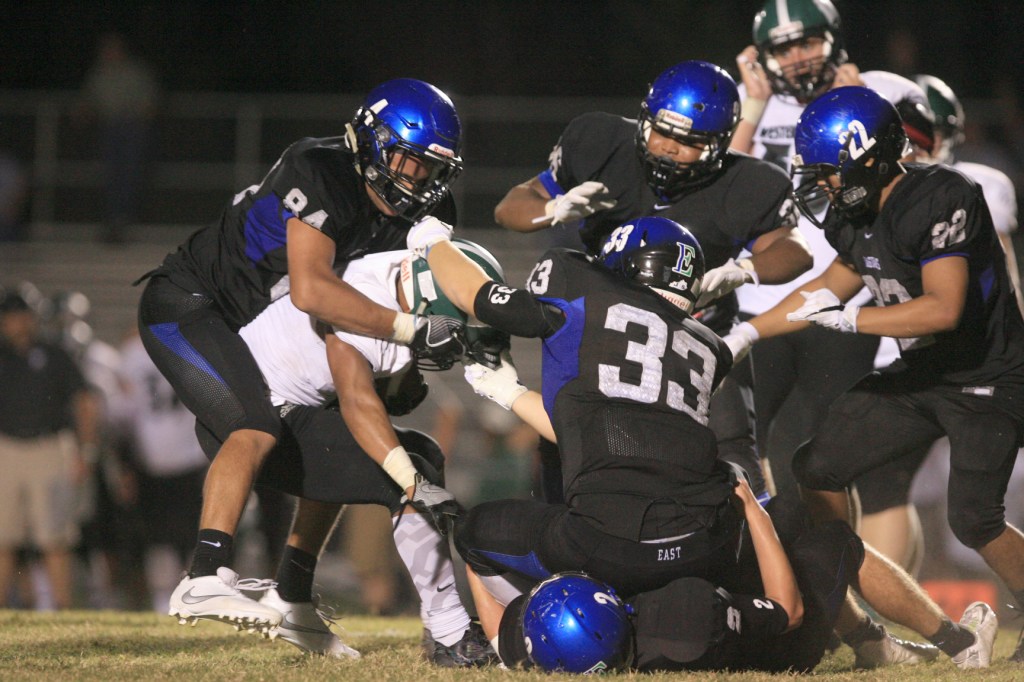 In the end, 81 yards separated East Jessamine from a chance at overtime against Western Hills on Friday and an opportunity to pad its resume with a victory against a talented Wolverines team.

After squandering a 20-point lead, the Jags were forced to stare into the cold truth of reality as Western Hills ticked off 28-unanswered points in route to 35-27 lead with 2:51 seconds left in the game.

With half a field separating East from the endzone and overtime, the Jags began their final drive in much the same way the second half began, which to say was not good.

East suffered two consecutive sacks to open the drive following a Storm Wilson catch. The Jags were then tasked with converting a 4th and 17 to prolong the rally. Fortunately, fate would swap sides as the Jags’ Kyle Gann connected with Connor Hearn on a play that was seconds away from proving disastrous.

As a result of the play, East lined up on the Wolverines’ two-yard line with 51.9 seconds left. From there, the Jags turned to Gann who delivered, unscathed, on a quarterback keeper that put East within just two points of Western Hills.

The game now came down to the two-point conversion. It was a situation that East faced in a loss to Spencer County on Sept. 2 when the Jags went for the win instead of forcing overtime. This time, the pendulum swung the Jags’ way.

Gann took the snap, rolled to his right and baited the Wolverines’ defender into committing to the sneak. As the defender rushed in, Gann lobbed a pass into the waiting arms of Max Darby.

East had weathered the storm, 35-all.

“I’ll tell you what, he played his guts out tonight,” East head coach Mike Bowlin said of Gann. “He’s a competitor. You’ve gotta love Kyle Gann. He just made play after play. He had his best night throwing the ball all year long.”

All the Jags needed to do now was kick away from Western Hills’ sophomore Wandale Robinson — a freak athlete that gashed East for four touchdowns.

East did just that, but the kick was high and long enough that it gave the Wolverines time to pitch the ball back to Robinson.

That proved to be East’s demise.

Robinson darted through the Jags’ special teams, leaving a trail of defenders in his wake en route to an 81-yard, game-winning kick-off return.

“The downside is that if we onside kick it they’re going to get the ball around the 50-yard line,” Bowlin said. “With a potential to throw one in the endzone and beat you on a Hail Mary. We felt like, ‘Lets kick it away from him, kick it deep and that takes away the one shot at the endzone that we’ve given up before.’ They were smart enough to pitch it.”

The loss was the third in four games for East, as well as the the second last-minute heartbreaker of this season.

“Our kids fought their tails off,” Bowlin said. “I can’t fault them for anything we did. We just happened to get beat by a really good football player … Hats off to him. He made a great run and pulled off a phenomenal finish.”

That finish was not even a fleeting possibility with eight seconds remaining in the first half. East was dominant throughout the early stages of the game. With Gann accurate from the air (8-for-15 for 144 yards and two touchdowns) and Fortenbery pounding his way through the Wolverines’ defense (28 carries for 92 yards and one touchdown), the Jags were seemingly heading into the half with a resounding 27-7 lead.

The momentum changed with one play.

With eight seconds left in the half, the Wolverines’ JLen Youngblood connected with Robinson on a 34-yard touchdown pass helped by two missed tackles. Instead of a 20-point lead, the Jags limped into the homecoming court ceremony nursing a tenuous 27-14 lead.

Adding insult to injury, Western Hills marched down the field on its first possession of the second half and narrowed East’s lead to 27-21. The Jags then gave the ball back on a fumble, which the Wolverines converted into another touchdown for their first lead of the game, 28-27.

East appeared to have pulled ahead with 8:56 remaining in the game, but a Gann touchdown pass to Eric Green was called back due to a clipping penalty. The Jags had another opportunity to take the lead, but Michael Taylor dropped a touchdown catch after he was drilled in the endzone.

Western Hills would then score on a 3rd and 12 on another Robinson touchdown. That set up East’s final drive.

With the loss in the rearview mirror, East now turns to upcoming Mercer County.

“I told our kids the district championship is what we break it down on and that starts next Friday night,” Bowlin said. “Our goal is still obtainable. I feel like all the things we’re trying to do is still in front of us. But, we’ve just got to stay strong. This was a tough one to swallow.”