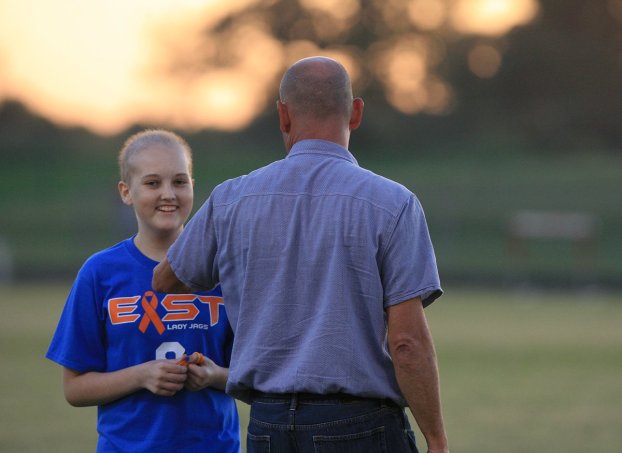 As the West girls’ soccer head coach Kevin Wright said about Monday’s rivalry game against East Jessamine, “What we did tonight is bigger than the game right there.”

The two programs, along with the community, rallied together to help East’s Kylee Tyson battle a rare form of leukemia. Through the sale of T-shirts, auctions and tickets, the community was able to raise $1,500 in a span of two hours just on the silent auction sales alone; all the proceeds will help support Tyson’s hospital bills.

Overall, West was able to raise over $2,000 throughout the evening.

“This is what it’s all about,” Wright said. “Thinking of others, helping others. It was awesome.”

On the field, West struggled to find the same magic it conjured over the weekend in Tennessee despite taking a 5-1 victory over East — West’s fifth straight win. The Lady Colts failed to play up to their own standard, according to Wright; a standard that has propelled them to an 11-3 record even though they statistically have the toughest schedule in Kentucky and Ohio, per the Maher Rankings.

“Sometimes you’re not going to play pretty,” Wright said. “But you get the job done. The district was on the line tonight. That game was for the district first seed.”

The Lady Colts can blame a stacked schedule that had them travel to Tennessee for the Science Hill Invitational over the weekend. West played three games in less than a day-and-a-half, winning all three.

The team returned back to Nicholasville at midnight on Saturday and had to turn around and play a feisty East squad coming off consecutive wins (Mercer 6-5, Franklin County 5-1).

As a result of the rollercoaster schedule, Wright was aware that his team didn’t have that “razors edge” that they typically play with.

But, as Wright admitted, “Sometimes you don’t have to play perfect and move the ball like we did all weekend.”

West did manage to move the ball quite successfully throughout the night, which forced East to play on its heels. But regardless of the four-goal differential, the game was much tighter midway through the first half.

After West’s Hailey Cole put the Lady Colts on board first with her goal in the 33rd minute, East’s Suzannah Terrazas equalized in the 20th minute — It was the first time East had scored against West since Sept. 24, 2014.

Terrazas suffered an unspecified injury in the final seconds of the game and was transported to the University of Kentucky hospital via ambulance.

After Terrazas’ goal, West was dealt a lucky hand after East keeper Sarah Underwood tackled the Lady Colts’ Eva Mitchell in the box. Mitchell proceeded to nail the penalty kick. West was handed another penalty kick moments later when Anna Lee, too, was fouled in box.

She scored, and just like that, West led 3-1 heading into halftime. It was the momentum shifter that West was looking for.

“This is good,” Wright said of the match. “This will really sharpen you up for when the lights are brightest and the crowds are a little bigger for when you get into those knockout stages.”

The Lady Colts’ defense tightened in the second half, which forced East to play the vast majority of the final half in its own goal. As a result, West would score two more goals to place the game just out of reach.

Mitchell recorded her second goal of the match with 23:54 remaining in regulation, and Jasmine Liaupsin scored her first goal of the season with a dribbler past Underwood in the 20th minute.

“You’re playing your crosstown rival and they’re playing hard,” Wright said. “We’ve already beat them once and they wanted to win for Kylee, as well.”

Now West will debark on its final six game stretch, three of which will come against teams that will be in contention late into October.

But for one night, the spotlight shined solely on two Jessamine County clubs that rallied together to help one of their own.