The East Jessamine High School Band will take a trip to Dayton Ohio this upcoming weekend to compete in Bands of America.

Bands Of America is a three part competition in the bands competitive circuit.

“We’ve been practicing pretty much non-stop for the past few weeks preparing for this,” said James Mock, EJHS band director of the past two years.

The first part of Bands of America the EJHS band will encounter, is the regional competition. The next two parts consist of super regionals and grand national.

The last time the band attended the competition in 2001, they went all the way to grand nationals and placed 17th  in their class nationwide.

The reason for the five year break from the competition is due to change in directors over the last few years, Mock said.

“The staff and I thought bringing this back would be a great motivator for the kids,” he said.

For the band, consisting of grades seven through 12, it cost around $8,000 to attend the event.

In order to raise funding for the trip, the band conducted fundraisers in the community. They were also supported by individual, as well as cooperate sponsors.

“A thank you to the boosters and the community for supporting the band program this past year as we set the standards for our students to follow,” Mock said.

Some of the other bands at Bands of America are idolized by competing members of EJHS, and events like this one help band members to bond, he said.

The band is also preparing for a semi state competition in October at Madison Southern High School in Berea. This is an event in which they have proceeded to the finals on three different occasions: in 1998, 1999 and 2001.

“I think this year is only going to increase their morale and bring them closer together as a family,” Mock said. 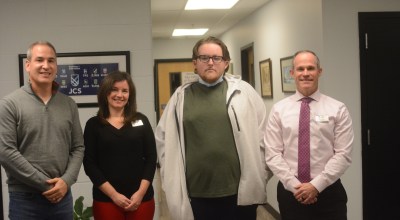