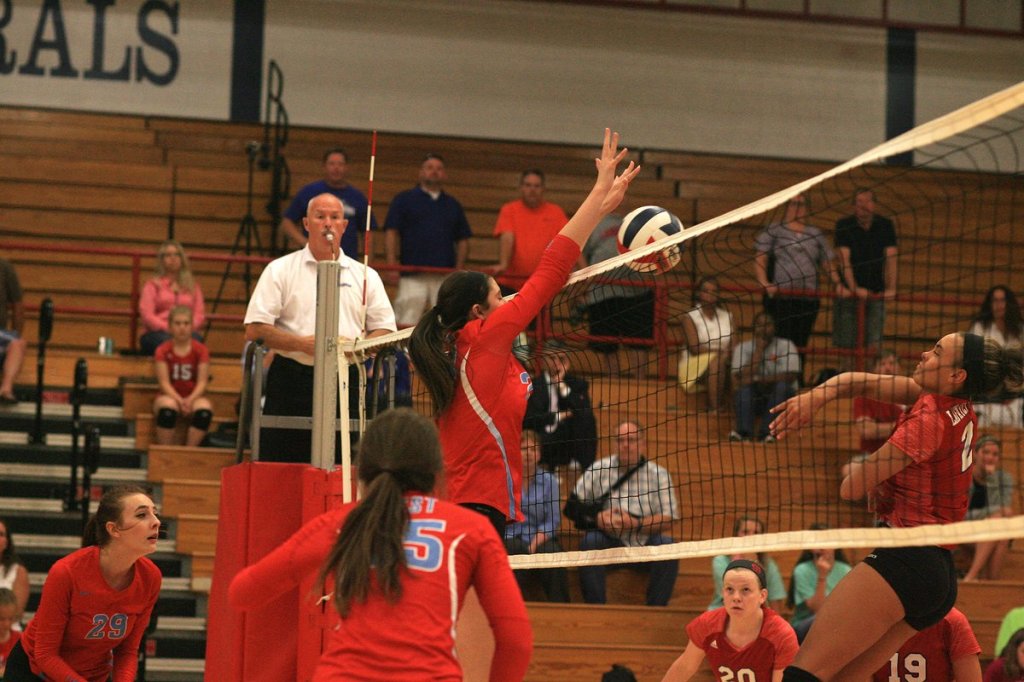 A stunning display of resiliency and determination propelled the West Jessamine High volleyball team past Lafayette 3-2 (25-20, 20-25, 25-18, 23-25, 15-14) on Thursday in what was the first win over the Generals in program history for West.

The win was also the first time that West has defeated three Lexington teams (Lexington Catholic, Lexington Christian and Lafayette) in one season.

“This is a huge win,” West head coach Bill Bird said. “To come to Lafayette on their home court. They’re a good team. It’s a huge win for us.”

A huge win indeed. West survived despite the Generals throwing everything but the house at the Lady Colts during the five-set thriller; however, the opening set unveiled little of what was to become a tight match throughout.

West jumped out to a 15-9 lead early in the first set. The Lady Colts built that lead up to 24-14 before the Generals rattled off six unanswered points to pull within 24-20. A service error by Lafayette ended the run and cemented the first-set victory for West.

Lafayette would carry that late first-set momentum into the second set as the Generals took a commanding 10-1 lead that increased into a seemingly unsurmountable 15-3 lead. The reeling Lady Colts would recover, however.

West rallied to narrow the deficit to 18-14. Then two consecutive Tess Perdue kills further narrowed that deficit to 18-16. Lafayette would pull ahead 20-16 before taking the second set 25-20.

Much like the beginning of the second set, the Generals opened the third set with a firm chokehold on the momentum. They blew past West to take an early 7-2 lead, but the Lady Colts summoned forth yet another rally. This time, the rally never fizzled out.

West would pull even at 9-all. It then it took its first lead since the first set at 10-9. The Lady Colts would hold off the Generals long enough to take the third set 25-18.

“We just lost focus,” Bird said of the second and third sets. “We won the first one, came out in the second one and got on our heels. The girls started making some bad habits, passing right away. I threw some subs in … Hannah Barr came in and played great for us the rest of the way. But, they just lost focus. They got it back and made a run.”

Lafayette’s run carried over into the fourth set. West took a late 22-20 lead, but the Generals recorded three straight points in route to a stunning 25-23 fourth set win.

That set up a fifth and final set.

West took early control of the fifth set, taking an 8-4 lead. Lafayette then stormed back to take a 10-9 lead, which then became an 14-13 lead. The Lady Colts summoned one last rally and evened the game at 14. They then took the match after Perdue’s final kill dashed Lafayette’s upset hopes.

The victory for West avenged an 0-2 (25-20, 25-18) loss against Lafayette back on Aug. 27 during the Bluegrass Invitational Tournament.

“This is the first year that I’ve scheduled them,” Bird said of Lafayette — Bird replaced Debbie Rose as head coach in 2014. “In the past, we’ve only seen them in tournaments. They’ve always been solid. They’ve got some good players. Their libero signed with a Division I (program). They’re a good team.”

As good as Lafayette was that night, West was better when it mattered most.