West takes to the air in a resounding 21-0, storm-shortened win over Clay County 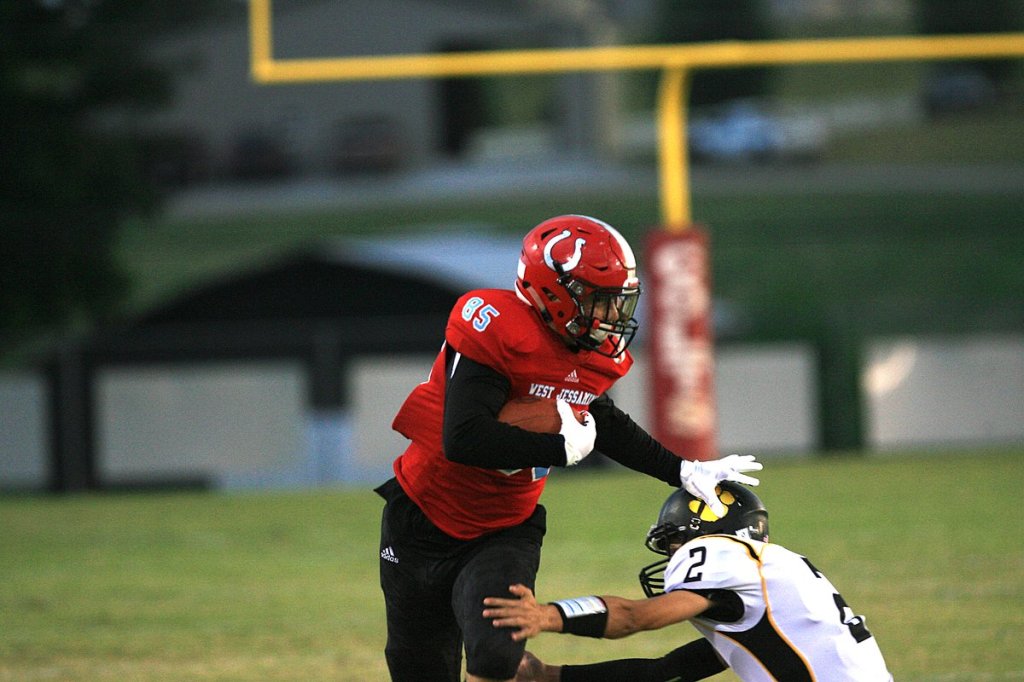 After consecutive losses, the West Jessamine seemingly righted the ship on Friday after the Colts blanked the visiting Clay County Tigers 21-0 behind three touchdowns from senior quarterback Marcus Jones.

The game was called during halftime as severe storms blew through the surrounding area.

With the win, the Colts move to 2-3 on the year. The last time West won multiple games in a season was in 2014 when the Colts went 4-7 in Class 5A. With the defeat, Clay suffers its fourth straight loss in addition to succumbing to a Jessamine County sweep — East Jessamine defeated the Tigers 49-28 on Sept. 9.

After three straight losses by a combined margin of 126-34, the Colts entered the night desperate for consistent productivity on offense. Fortunately, the West offense was tasked with lining up across a defense unit that falls in with some of the worst scoring defenses in Class 4A.

History, however, was not on the Colts’ side. They were facing a Tigers team that had defeated them 40-24 in 2015. In that game, Clay was blessed with the services of Nathan Sizemore. The senior gashed the Colts in the air and from the ground, accounting for 293 total yards and four touchdowns.

It’s a new year, however. Players have come and gone, and teams have either improved or taken a step back. And that was no more evident than on Friday as West proved that it belongs in the former category while Clay falls in with the latter.

As a result, the Colts began the evening with every intention of making a statement. And there was no better way of taking control than holding supremacy over the air.

West unleashed its passing game on the first play of the night with Jones hitting his tight end, Greer Stone, in the flat. The sophomore broke a Clay tackle and lumbered 66-yards for the opening touchdown.

Clay opened its ensuing possession with a wrinkle up its sleeve. The Tigers placed quarterback Will Sexton in at running back with the obvious intention of gashing the smaller West defense — Sexton entered the night averaging 92 yards per game.

West’s gameplay was simple: bottle up Sexton. Without his playmaking abilities, Clay’s offense was more or less crippled. What West did was nullify the passing game and force Sexton to try and make plays with his feet.

And try he did. But West was ready. Sexton was unable to gather any steam throughout the storm-shortened night. He managed to record a long touchdown run early in the second quarter, but it was called back on a holding penalty.

West knew that once it took away the Tigers’ offensive opportunities, Sexton would have no other options than to try and force plays with his athleticism. That mindset typically leads to unnecessary errors, which Sexton made in abundance.

That was the extent of Clay’s ability to threaten West once its senior quarterback was held in check. With their offense stagnating, the Tigers’ defense was unable to catch their breath as West picked apart their pass defense with a combination of quick passes and runs.

And with Jones dialed in, the Colts were seamless in the air. West recorded its second touchdown of the first quarter when Jones connected with Jamesy Swentzel on a 53-yard touchdown pass.

Before the second quarter could even reach its midpoint, West had struck again. This time, Jones snuck it in from the one-yard line, which gave the Colts the a 21-0 lead.

As West headed into the half nursing the three touchdown lead, the storms began to blow in. The game would be called a short time later as lightning dotted the horizon in all directions.

There will be no make-up game.

The win for West was a culmination of an excellent gameplan and steady execution on both defense and offense.