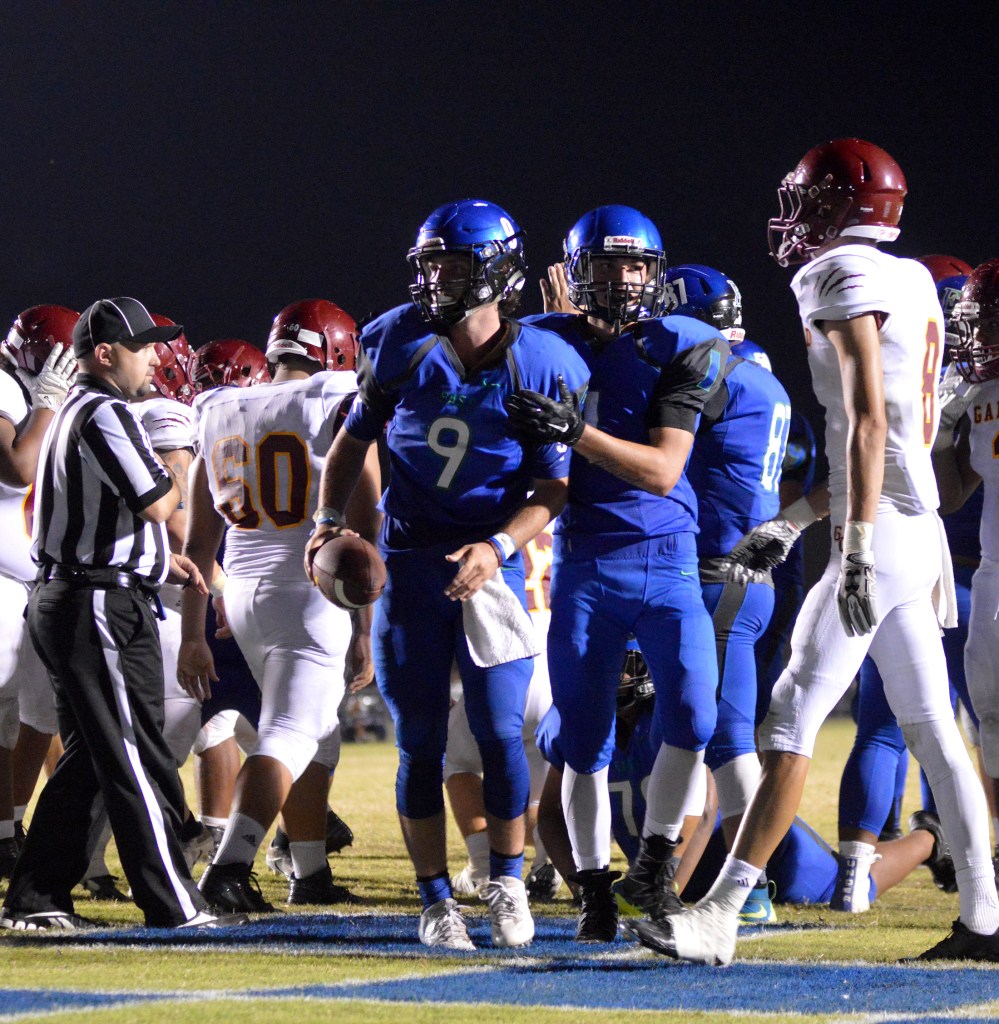 Jeremy Schneider/jeremy.schneider@amnews.com East Jessamine's Kyle Gann (9) is congratulated by a teammate after running in a second quarter touchdown in Friday's game against Garrard County.

Despite another stellar outing from senior running back Aaron Fortenbery, East Jessamine was unable to wrangle the Garrard County duo of Jacob Foley and Devin Logan as the Golden Lions pounded their way to a 34-22 victory on Friday.

Coming back after a lengthy bleacher-clearing lightning delay and holding onto a nine-point lead at East Jessamine, the Garrard gameplan following the delay can be summed up simply — hand the ball off to Foley or Logan and let them chew up yards behind the Lions’ big offensive line.

After the Lions withstood a fourth-quarter East touchdown to win 34-22 on the road, Garrard head coach Jerry Perry was asked what the likelihood was of seeing something other than a Foley or Logan run in the final 12 minutes of game time.

To that point, of the 25 rushing plays Garrard ran after the 2 hour, 6 minute delay, Foley carried the ball 16 times for 95 yards — including the final nail in the coffin, an 18-yard burst up the visitors sidelines for a score. He also rushed in the 2-point conversion, giving Garrard a 32-22 lead with 1 minute, 41 seconds showing on the clock.

Foley ended the night with 190 yards on 27 carries and three TDs. His other scores came on a 50-yard rush in the second quarter and a 20-yard run in the third quarter.

The Lions were up 24-15 after Foley’s second touchdown before the field was cleared and bleachers emptied for a lightning delay. Any sort of delay can derail a team, but both squads spend 126 minutes in the locker rooms.

Garrard players spent the time sitting and sweating in the locker room, chatting about anything and everything not pertaining to the game at hand, according to Perry.

“The biggest obstacle is adolescence,” he said. “There’s no way you can keep their focus, I mean, it’s just impossible. It’s an adverse situation. … I thought they refocused enough to get the game, and that’s all that matters.

“It’s the same for both teams. It’s just like we told them, whoever came out and adjusted to the time frame the best is going to win.”

The situation in East’s locker room was a bit different. The Jaguars were down by nine points and facing a fourth down-and-14 on the Garrard 30-yard line, and head coach Mike Bowlin said his team watched film and diagramed that play over and again.

“It gave us a lot of time to think about the call,” Bowlin said. “We made some little adjustments. It was like having another halftime for us.”

Neither team seemed to wear the effect of the delay or late restart; the ball was snapped to resume play at 11:14 p.m., usually when players are digging into a post-game snack.

For what it’s worth, East quarterback Kyle Gann threw an incompletion on the fourth down play. Garrard took over and gobbled up nearly nine minutes of game clock, but it handed the ball back to East with 8:46 remaining in the game.

The Jags (3-2) marched 84 yards down the field for a Gann TD and a 24-22 game. The drive was kept alive by two large rushes from Fortenbury and a 20-yard completion from Gann to Eric Green at the 1-yard line.

Through five games, Fortenbery has rushed 110 times for 652 yards with seven touchdowns.

East needed to get the ball back quickly, but Garrard again put the clock in its favor, and when the Lions lined up for a 2nd-and-5 play at the Jags’ 18, Bowlin opted to let the Foley score for a temporary eight-point lead and to receive the ball back with time on the clock. It was a maneuver contingent upon the Jags stopping the 2-point conversion try — which they didn’t. Foley pushed in and made it a 32-22 lead with 1:41 left.

“Not that they wouldn’t have, but we told our kids to let them score because we were down inside of two minutes and only had one timeout left. They were going to take a knee and we were going to walk out of here with nothing more than a 24-22 loss.”

Things fell apart quickly for East on its final possession. An incompletion and a sack were the results of the first two downs, and Tony Olivar sacked Gann in the end zone for a safety.

Fortenbery led East with 176 rushing yards, impressive for a player who started playing football last year and moved to the offensive side this year.

“His sophomore year, he didn’t even play football. He’s a cheerleader and potentially thinks he could go on and do that in college,” Bowlin said. “… Now for five games, we’ve rode him. A year ago, if you would have said Aaron Fortenbery would be our leading carrier, I would have said you need to get back into reality here, dream world is over. But Aaron brings it every Friday.”

The Lions held Gann in check for the most part, save 32- and 36-yard rushes. The senior had 64 rushing yards and completed 2-of-12 passes for 32 yards.

“He’s the key by far,” Perry said. “I told somebody before the game he could beat us by himself just by waggle pass, and that’s without throwing. … That kid is a problem. He makes your defense have to be honest.”

Hopefully the Lions won’t encounter another two-hour delay this season, but even without that, Friday’s game had plenty of lessons they can take through the following weeks of the season.

“It’s pretty unusual when you play a game and can hear a pin drop, that’s an unusual situation,” Perry said. “There was a lot of good things they learned tonight. Hopefully, we’ll learn more on tape.”