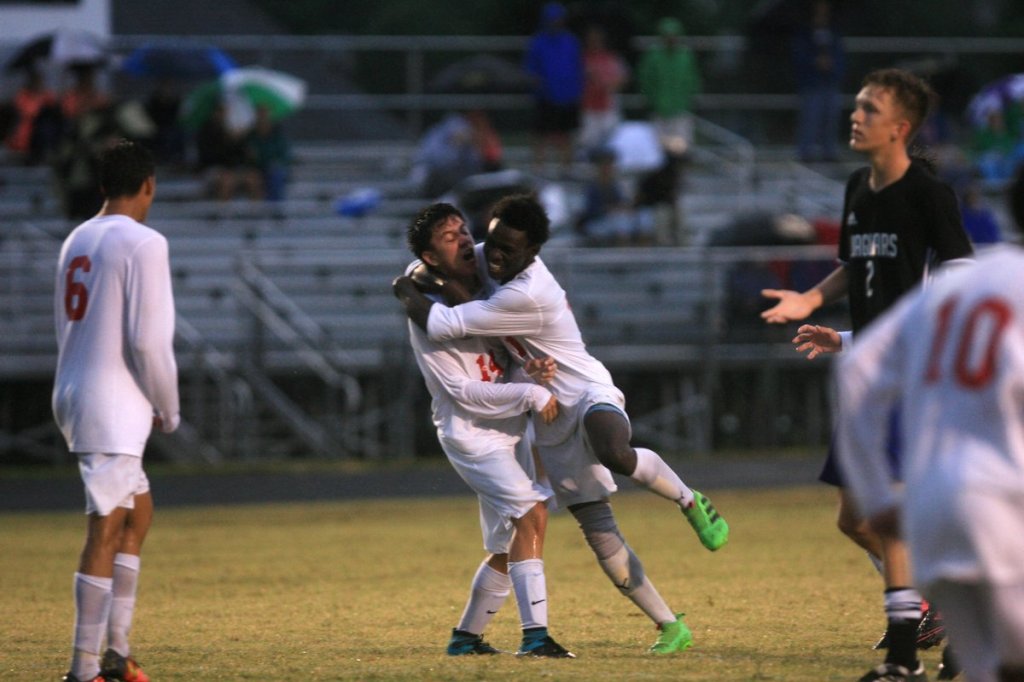 Torrential rains did not dampen the mood Saturday as West Jessamine High boys’ soccer swept the regular season series against East Jessamine after Lucas Labrillazo’s late-game goal sent the Colts past the Jaguars 1-0.

It was the fourth consecutive regular season sweep for West against East.

“Weather played a factor today on offense,” East head coach Brandon Cummons said. “It all comes down to moving your feet on defense … Overall, I was pleased. They have a bit wider of a field here than we do. They took a majority of (our) combination plays away.”

With storms blowing into the region, the varsity game was pushed forward from a 7:30 p.m. start to a 6 p.m. start. Coincidently, the timing occurred just as a strong front hit the Nicholasville area. As a result, the majority of the first half was played with pouring rain peppering the teams and fans.

West applied the most pressure throughout the first half, but was unable to punch it through despite numerous shot-on-goal opportunities. East, despite being on its heels, countered on occasion but was never able to cobble together a consistent attack.

“We had some good chances in the first half,” Cummons said. “It’s one of those things that when you play a team that has that solid of a defense you have to take care of your chances in front of the goal.”

But with 2:25 remaining in regulation, West’s Labrillazo danced his way through the heart of East’s defense and ripped a shot past Jaguars goalkeeper Sam Griffin that all but sealed the victory for the Colts.

Despite the loss, East is looking pastits record and focusing on mentality and resiliency. As the latter half of the regular season winds down, those wins and losses become less of an importance for both East and West.

With a three-team district, and Mercer County all but assured a spot in the district championship, the path to the 12th Region tournament will come down to yet another East vs. West matchup.

Both teams can potentially lose every game from here on out, and still, the district bracket would remain unchanged. Which is why Cummons is less worried about the record than he his about his team grasping the concepts and mentality needed to make it past the first round — a feat that hasn’t happened since 2010.

As of Sunday, East sits at 2-10 on the season, while West sits at 4-6-1. Both have little chance of catching a Mercer team that sits 9-0-1; both have one more game against the Titans this regular season, as well.

Mercer has defeated both East and West by a combined 8-0 this year.

“Everything we do here, I’m just preparing,” Cummons said. “Get their effort up. Making sure they’re mentally engaged for the entire 80 minutes. Being able to play in a game like this, two times this year. Their effort’s good.”