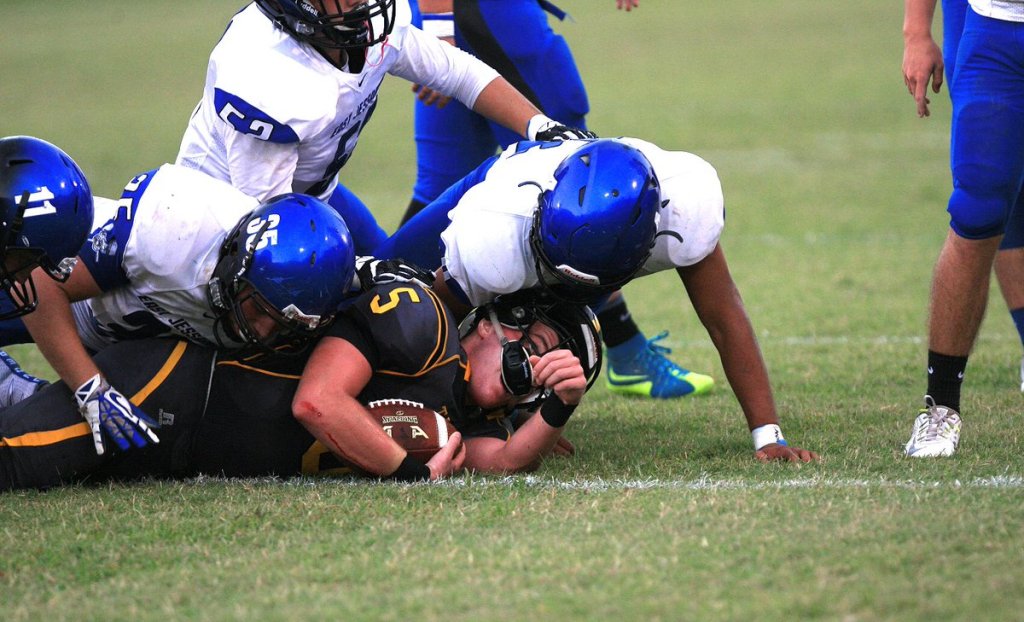 With Clay County High bottling the thunder, the East Jessamine High Jaguars turned to the lightning Friday during their 49-28 win over the Tigers under a hazy evening sky in Manchester, Kentucky.

The win moved East to 3-1 on the season; the Jaguars now sit ninth in Class 4A.

“I felt like we were definitely the better team and could take control at any time,” East head coach Mike Bowlin said. “We just had to worry about us … They were humungous. They were one of the bigger teams we’ll play this year. You know, when you catch a flat because of last weeks’ big loss that we had, and everybody put their heart into, it was hard to get them up this week. I kind of sensed it. I was just hoping we were that much better, and we were.”

The Jaguars scored six touchdowns on the night and one in the air. With their primary running back, Aaron Fortenbery,  held somewhat in check (16 carries for 81 yards and one touchdown), the Jaguars turned to Kyle Gann and speedster Michael Taylor to gash their way through the Tigers’ defense.

“They were clogging the middle up,” Bowlin said of the Tigers’ defensive front. “… They were big and they clogged the inside of the line. They said, ‘You’re not going to run Fortenbery and I said OK, that’s fine.’ Once they got a step tired, Michael’s speed took over on the outside.”

East rushed for a combined 374 yards despite having its starting center out.

Gann finished the night with 161 rushing yards for two touchdowns and was 2-for-8 for 59 passing yards and one touchdown. Taylor replaced Desman LaDuke early in the second half after LaDuke suffered a left knee injury. Taylor rushed for 87 yards on six carries for three touchdowns.

Though the final score would seem indicative of a blowout, the game was much closer throughout the early stages and into the second half.

“They were big and we made some mistakes,” Bowlin said. “We just kind of went through the motions. We had a two-and-a-half hour bus ride and through two-and-a-half quarters we just lied around. I can’t completely fault our kids’ effort; we never punted tonight. I told them before the game, ‘If we do what we need, we’ll be fine.’”

Sexton scored both of Clay’s touchdowns in the first half, and he proved to be a nuisance for the East defense.

“He’s a really good football player,” Bowlin said of Sexton. “They’ve played some good football teams. I told the kids all week long, ‘We’re in for a dogfight.’ They’re big and he’s a good athlete … He’s a nice football player. I think he’s going to be playing Saturdays somewhere. He’s got a nice ball and he moves well in space.”

Sexton had his hands in all four of Clay’s touchdowns.

Not to be outdone, Gann was a force thoughout the first half. He had his hands in all three of East’s first half touchdowns. His 26-yard scramble put East up first with 8:04 left in the first quarter. He proceeded to hit Storm Wilson for a 30-yard touchdown pass early in the second quarter and followed two minutes later with a 42-yard touchdown run.

The start to the second half ushered in some angst amongst the Jaguar faithful. After Gann picked off Sexton to open the half, East’s LaDuke fumbled the ball on its ensuing possession. The Tigers then capitalized with a 65-yard touchdown run by Sexton with 8:45 remaining in the third quarter.

East still led 21-20, but the momentum had swung in Clay’s favor. Making matters worse, LaDuke went down with his injury on the following possession.

The Jaguars woke up, however. Fortenbery scored his first touchdown of the game two minutes later to give East the 28-20 lead — Fortenbery has rushed for 472 yards with seven touchdowns this season.

East then pooched the kickoff and recovered. Enter Taylor. The junior running back scored his first touchdown of the game on a five-yard run that gave the Jaguars the 36-20 lead with 39 seconds left in the third.

From there, Taylor would score on a 33-yard run and a 42-yard run. The three touchdowns were the first Taylor has scored this season. Depending on the extent of LaDuke’s injury, look for Taylor to complement Fortenbery going forward.

“I actually have a period in our practice schedule that’s called, ‘Michael Taylor’s offense,’” Bowlin said. “I put Michael in and just rep, rep, rep. This is his first year playing with us and I’m just trying to get him up to speed. He’s done a great job of catching on. Here were are four games into the season and it’s time for Michael Taylor to step up and say, ‘It’s my turn.’”