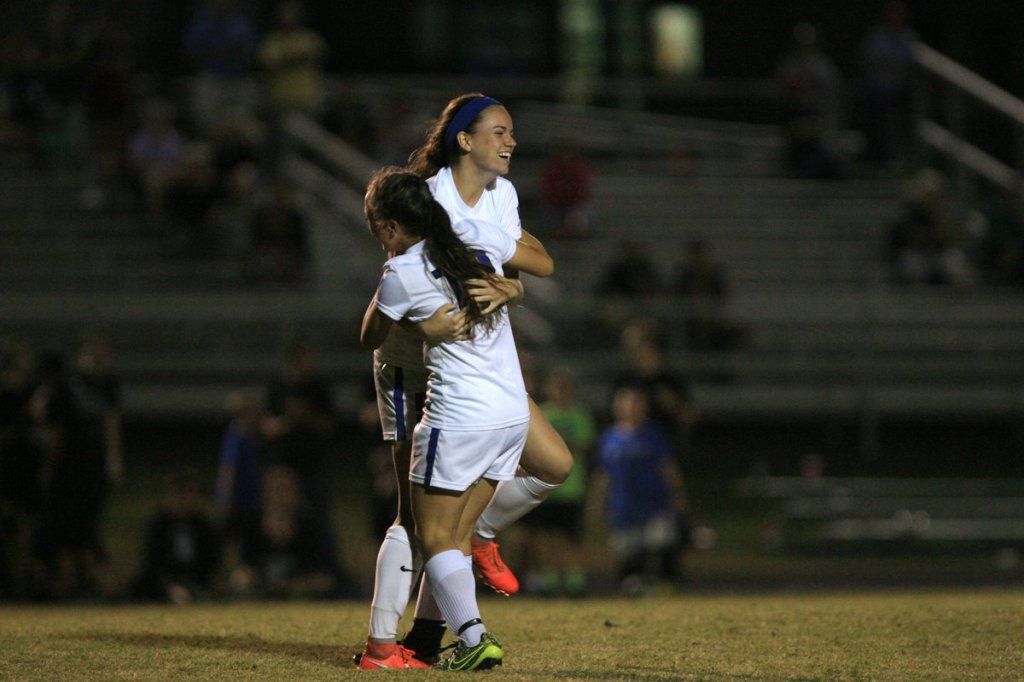 If you were to slowly peel back the layers of Monday’s 46th District matchup between East and Mercer girls’ soccer, you would find a game not between two luckless teams, but a game flush with postseason implications.

Which is why East’s 6-5 victory in sudden-death penalty shoot-outs is more than just a second win on the season for the Lady Jags — it’s a moral boost that implies that all is not lost this season.

“We needed this win,” East head coach Zach Welch said. “Not taking anything away from Mercer, they’re a great team and it’s going to be a battle next time we see them. We needed it as a team and a program. To bring back the joy; the having fun mentality of playing good soccer and winning games.”

The two teams entered the match a combined 1-10, with East holding the lone win (Apollo, 3-1). As West Jessamine continues its run in the top 10, the opening round of the district tournament has all but been declared: East vs. Mercer. The winner automatically advances into the 12th Region tournament as well as a matchup against the Lady Colts.

East last made it into the region tournament in 2014 after defeating Mercer 4-1. The Lady Titans claimed revenge last season after knocking out the Lady Jags in the district tournament after a 2-1 victory.

The contest Monday was what you would expect from the two district rivals. After Suzannah Terrazas’ uncontested goal in the 33rd minute of the first half put East up 1-0, the game muddled into a defensive affair that saw the ball stuck primarily around the midfield.

For the vast majority of the first half, Mercer had the Lady Jaguars on the ropes. Save for Terrazas sneaking behind the Mercer defense, the Lady Jags were unable to mount a sustained attack. If it were not for the steady hand of keeper Sarah Underwood, East would have been dangling from those ropes.

But that wasn’t the case. East retained a 1-0 lead into the half.

The second half began with much of the same. Mercer attacked East’s defense, but time and again, the Lady Jags would find a way to keep the ball out of the goal. East’s offense was far from stagnant, however.

The girls chipped away at the interior of Mercer’s defense. At times, cranking out shots that just missed wide. The back and forth between the two teams continued until the final few minutes with East still nursing that 1-0 lead.

But with less than three minutes left in regulation, Mercer equalized. It was a deflating moment for an East squad that had weathered the Mercer storm for 77 minutes.

“By the look of them, I don’t think they need to be winless,” Welch said of Mercer. “They’re a solid team. They fought till the end. The had us on our heels in the second half, which I didn’t like. They came out in the second half and brought it.”

Two extra periods, which were five minutes each, were tacked on. Mercer nearly took the win in the first overtime, but the horn sounded just as the ball bounced dangerously around a mass of Mercer players in East’s box. The game then turned to penalty kicks.

Much like the match, the affair was even. The teams tied it at 5-5, which sent it into sudden-death penalty shoot-outs.

The moment then belonged to East’s Underwood. She caught the first Mercer attempt on what was a lazy shot. The Lady Jags then called on her to take the lone shot in the shoot-out.

It became a classic case of keeper vs. keeper.

On this night, Underwood won. Her shot hugged the ground and scooted just to the right of the diving Mercer keeper. East was victorious.

The game is the first of two in regular season play between these two squads. They will face one another on Oct. 1.

“Like any team, they can change like this,” Welch said of facing Mercer again. “I’m expecting to see a different team when we play them. They will fix anything that they saw, and we’ll fix anything that we saw. It’s been a long time since we won at Mercer. It’s tough to play there. It’s going to be a battle.”