Wheelchair racer takes a break, but not finished 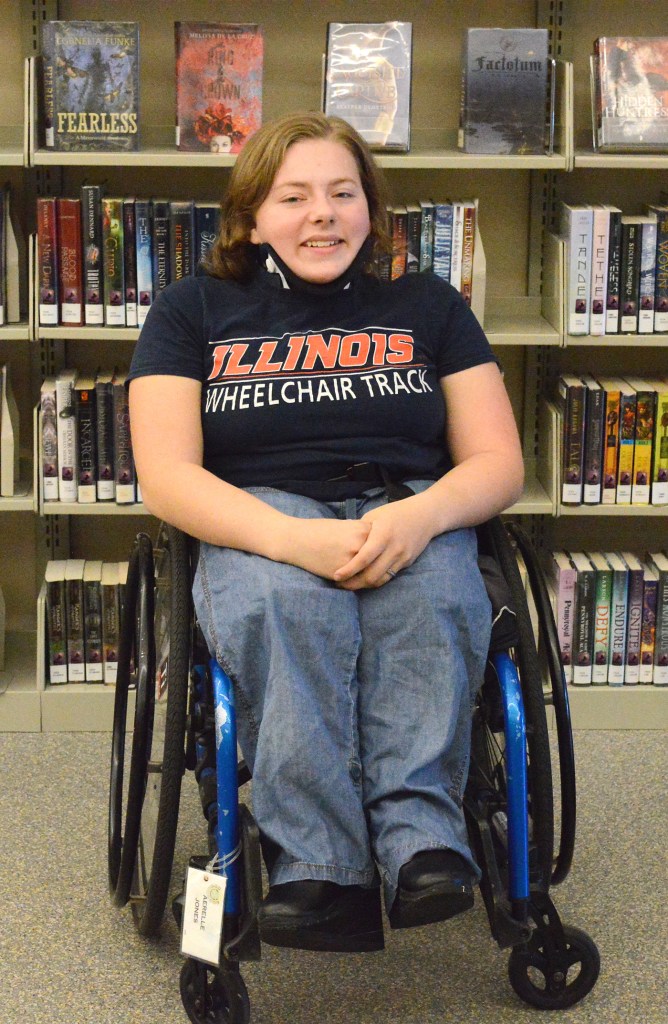 Nicholasville native Aerelle Jones, 17,  raced her wheelchair over the summer in three track meets in three states — the Endeavor Games in Edmond, Oklahoma; the Desert Challenge games in Phoenix, Arizona; and Jr. Nationals in Middleton, Wisconson.

While in Arizona, Aerelle was grouped with paralympic athletes who have similar abilities as she does to make the competition more fair.

“It would be totally unfair for someone with an arm impairment to be racing against an athlete with full arm control,” Aerelle said in her blog post about the classification.

She explained that disability groups are classified using a numerical system. Numbers 11-13 are for blind athletes, 20 indicates intellectual impairment, and any number above 20 is for those with a physical impairment.

Aerelle’s classification is T54, because she is in a wheelchair and has some control over her abdomen. The T means she was classified as racing on the track.

The first time she had ever participated in a track event was in Arizona, previously she had only participated in road racing, which involves longer distances such as 5K, 10K, half marathons and marathons.

In Arizona, Aerelle became nationally certified, meaning she could compete on a national level, such as the Jr. Nationals in Middleton, Wisconsin.

“I’m thrilled for her because it’s what she’s wanting to do,” Delia Jones, Aerelle’s mom said. “Her goal is achievable.”

“She’s actually faster than she thought she would be,” Delia said.

Had she been internationally certified, Aerelle’s times would hve qualified her to compete in the time trials in Rio. International competition is her next goal.

All great athletes must start somewhere, and for Aerelle that somewhere was the Driveway to 5K hosted by the Jessamine County Public Library.

There are no para-sport programs in the area, Jones said. So the library and her father, Raymond Jones, helped her train.

“My dad and I just carved our own path,” Aerelle said.

In 2012, her mom told her about the program that teaches participants to run properly, including breathing techniques that help with endurance.

Aerelle said she came to the program on the first day because she wanted to learn how to race in her wheelchair, and she had to start somewhere.

“That was my launching point,” Aerelle said.

At first, Aerelle trained in the weekly program that consists of practicing in a group, in her regular wheelchair. She learned what she could and could not do as well as how to keep up endurance in various places around Jessamine County.

“It’s kind of nice to have a common goal you’re working toward together,” Aerelle said. “There’s a lot of encouragement, as well.”

No long after that, she participated in her first Turkey Strut 5K race.

If participants attend at least half of the group practices at Driveway to 5K, the library pays their way into the Turkey Strut 5K race, which takes place on Saturday, Nov. 19, this year.

“If you follow the plan, by the end you should be able to run the 5K,” Aerelle said.

Though Aerelle has participated in the Turkey Strut many times, she may not this year due to a neck surgery she underwent in August.

The purpose of the surgery was to eliminate her having to wear a neck brace because of her genetic disorder.

Aerelle was born with Klippel-Feil, a disorder characterized by the abnormal fusion of bones in the spinal column. Her mother, Della, younger sister, Iannah; and, brother Garrett, also have the disorder but do not require the same assistance.

Before the surgery, one of her cervical vertebrae would move a meter each time she tilted her head down.

Aerelle said there was a break between her racing, and it was just the right time to do the surgery.

“It wasn’t as horrible as it may seem,” she said.

It will take Aerelle about three months to heal enough to be allowed in her racing chair again.

During that time, she said she plans to continue making improvements to the chair.

Aerelle, her dad and the library are also working on a hard glove to help with the friction caused by pushing the wheels with her hands. They are using the 3D printer and scanner at the library to put the glove together one piece at at time.

“It has meant a lot to have the library here to work on that process,” Aerelle said.

In the process used now to make these gloves, if a piece breaks it can become a huge ordeal to fix because it has to fit the hand perfectly to work properly.

If the team can get it to work, 3D printing would make it much easier and more accessible to everyone.

“Any type of hand, no matter how unique it is, will be able to have a pair of racing gloves,” Aerelle said.

At the moment, the process is still trial and error, but it is coming along.

Though Aerelle is not sure of the next race, she said she has the ultimate goal of participating in the Paralymics one day and in the Jr. World Championships next year.

Though she said those are her goals, she is not putting all her eggs in one basket.

“My identity is in Christ,” Aerelle said.

Those interested in participating in the Driveway to 5K can come to the first practice from 4 to 5 p.m. on Friday at the Jessamine County Public Library.

“Completing the race isn’t about winning, or even about competing with other people, it’s about discovering what you can do, and finding joy in the accomplishment,” said Les Lehman, the Adult programing Librarian in charge of Driveway to 5K. “Aerelle’s story is the perfect example of how people can use this program as a source of empowerment.”