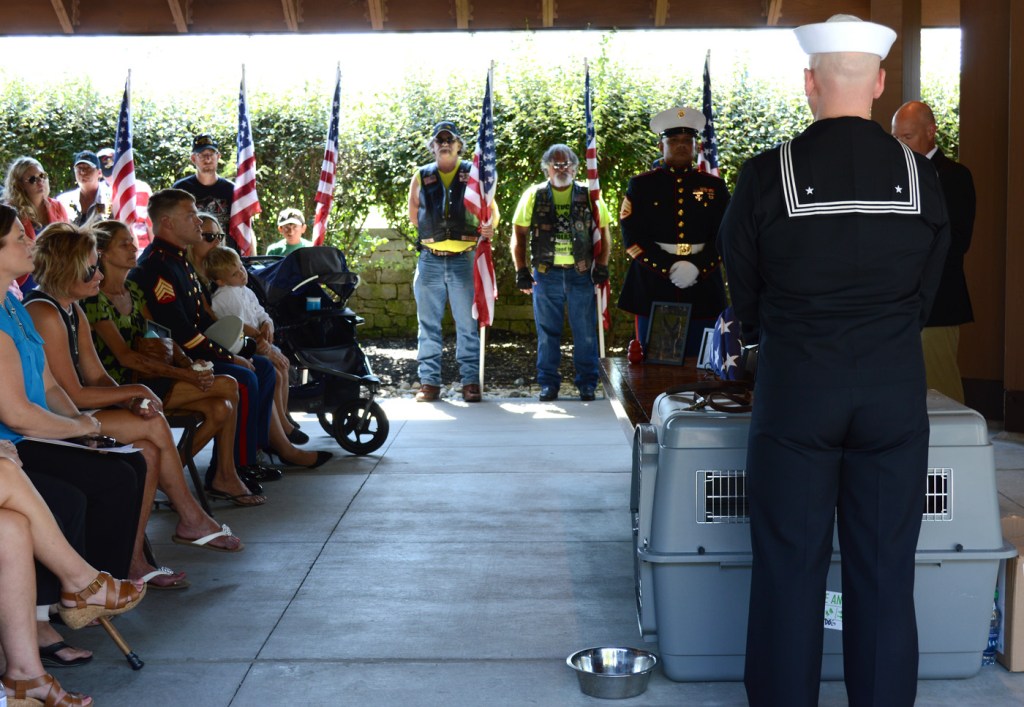 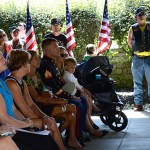 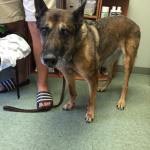 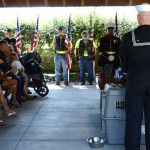 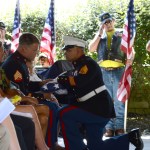 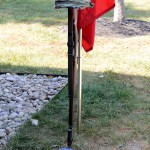 Friends and family shared memories and tears at Camp Nelson National Cemetery last weekend at a ceremony to honor a veteran of a different breed.

Iireland, a military K9 who served two tours in Iraq, was the first of her kind to be honored at the cemetery.

She was born into a puppy program at the Lackland Air Force Base in San Antonio, Texas.

There, Iireland, a Belgian Malinois, provided the program with more puppies before going to Camp Lejeune.

At the camp, she was trained to sniff out bombs and detect explosives.

“Her first six years of life were spent in the Marine Corps,” said Josh Sutherland, Iireland’s owner, partner in the military and best friend.

It was that military duty that united Iireland with Sutherland, who served by her side in 2007 and 2008.

The two crossed paths because Sutherland, a marine, needed a dog, and Iireland needed a partner.

After retiring, Iireland spent the last seven years of her life with the Sutherland family.

One of the things Sutherland said he will miss the most is just having her around the house.

When the memorial service was initially proposed to Sutherland, he said he was hesitant.

“She was gone, and I didn’t want to drag it out and make it worse on us,” he said.

After thinking it over, Sutherland said he realized Iireland was a veteran and she deserved to be honored.

For the last year, Iireland was under the care of Dr. Elizabeth Banks at McCaw Veterinary Clinic.

“We can’t say how much we appreciate everything with the staff at McCaw and how much they helped us through the entire process,” Sutherland said.

“The time we got to spend with her at the clinic was priceless,” Banks said.

She said Iireland had common problems and illnesses related to her age.

“Although she was aging and her health was failing, she maintained the best personality and zest for life,” Banks said in a speech at the memorial.

During her week at the clinic, Iireland would watch people during the hustle and bustle of the day, Banks said. She told a story about Iireland following one of the technicians around and getting excited about finding a big box full of Kong toys, a rubber toy used in the military to train dogs to detect explosives.

“I can’t pretend to comprehend how Josh and Kaelyn must have felt to make the decision to let Iireland go,” Banks said. “Josh said to me numerous times that he couldn’t let her suffer and didn’t want her to be in pain. I know in my heart that Iireland felt the love Josh had for her. Just as she had stood by his side month after month, Josh didn’t leave her side when she needed him the most. He held her in his arms with a strong embrace as he said good-bye.”

Banks said she hopes the memorial will bring awareness to animals that have served in the military.

“The last thing we can do for them is give them the honors they deserve by memorializing them,” she said.

Cheri Weidlich, a receptionist at McCaw clinic, whose son is a soldier stationed at Fort Hood, Texas, is one of the people who got the ball rolling on the memorial service.

When it became apparent that Iireland was going to have to be euthanized, Weidlich said she called Shawnda Ebert, a client of the clinic, who contacted all the right people to make the memorial happen.

“I can’t imagine what he’s going through,” Weidlich said. “I really do hope it helps Josh to heal.”

“The service was great, we had a bigger turnout than I expected,” Sutherlalnd said.

“We appreciated every one who took time out of their day to help put it together.”