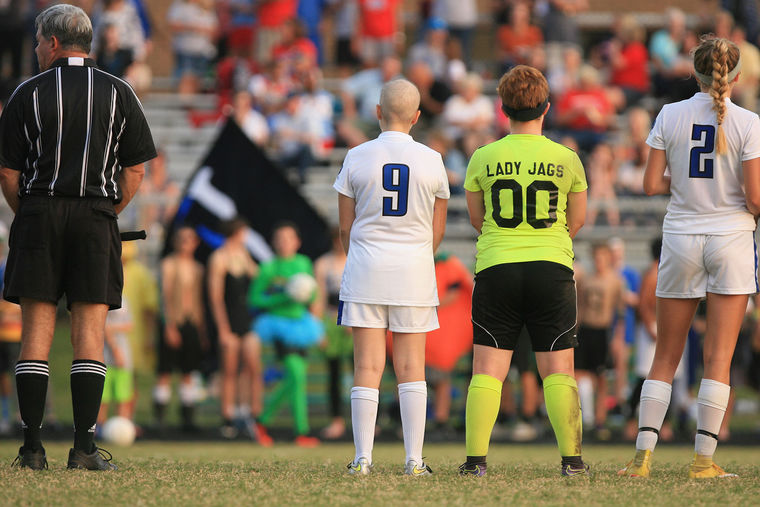 The first of two meetings between East and West High girls’ soccer this season took on a new meaning Wednesday as the return of East captain Kylee Tyson turned an intense rivalry into a lesson in camaraderie, perseverence and community unification.

Tyson was diagnosed with a rare form of leukemia on May 2. She is only the 26th person in the world under 21 to be diagnosed. Yet, despite months of painful treatments and extended hospital stays, she laced up her cleats, donned her East jersey and took to the field as a captain for the Lady Jaguars.

Her return to the field not only displayed the power of resiliency, but it exemplified the fight of Tyson to battle the disease with a vigor not seen in most and her strength to return to the pitch with her friends and play the game that she loves.

“That was awesome,” West head coach Kevin Wright said Tuesday about Tyson. “We prayed for her the other day at practice. I just told her when she came off the field that, ‘We’re praying for you. We’ve got your back. Look at those shirts with your name on it.’ This is about others.”

It was a humbling moment that revealed that strength is not defined by muscle nor size, but what lies from within.

Tyson would start and play for the first four minutes of the game.

The match itself was cut short with four minutes remaining in the first half as lightning dotted the horizon, which caused the game to be postponed until Tuesday. West entered the extended, week-long break nursing a 3-0 lead thanks to two goals from Anna Lee (35’, 18’)

The weekend has come and gone, and East and West girls’ soccer has returned to conclude the chapter that began last Wednesday before the late-summer weather reared its ugly head with just minutes remaining in the first half.

West added three more goals in the second half as the Lady Colts defeated East 7-0 in the first of two regular season meetings between the two teams. The win for West follows a humbling 6-0 loss to undefeated Highlands on Saturday.

“You couldn’t put a price tag on all of this,” Wright said. “All these lessons that you learn and encouraging others, working hard and adversity. Most people that had adversity you don’t hear about. Because they quit … We want to get hit in the mouth; we want challenges; we want competition. That’s what we’re all about.”