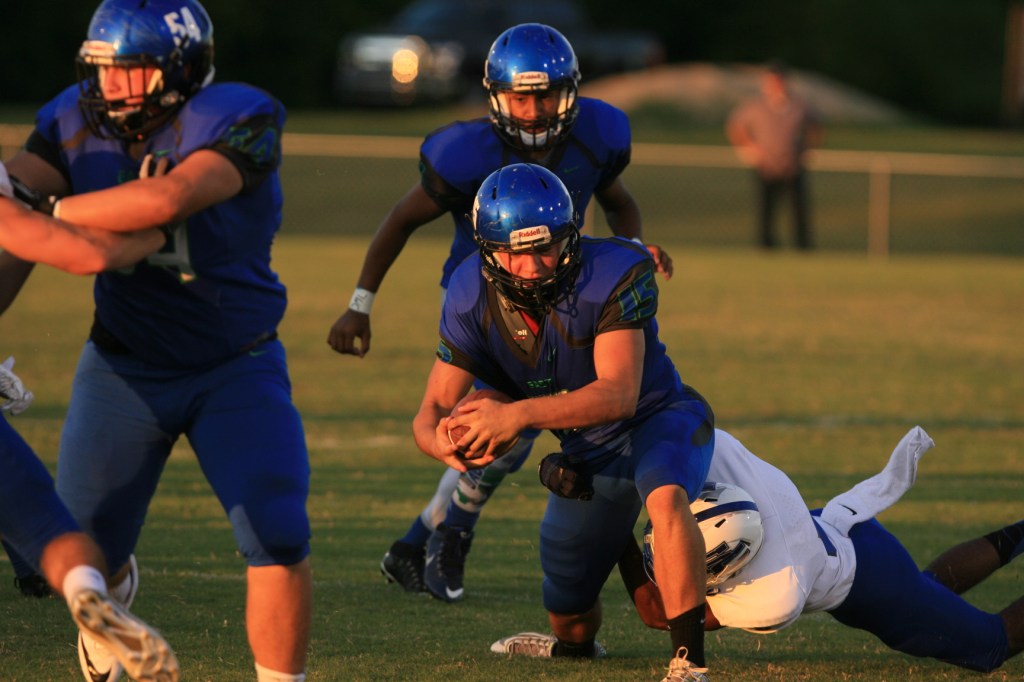 For 24 minutes on Friday, East Jessamine High proved that it can ball with the big dogs after the Jaguars faced a 14-point first half deficit yet rallied with 27 second-half points during their 28-27 loss to Spencer County.

The Jaguars were in position to take the lead with 16 seconds remaining in regulation, but their two-point conversion attempt was stopped just short of the goal line.

“We’ve won, we’ve had some success, we won our bowl game and we beat a pretty good Lincoln County team,” East head coach Mike Bowlin said. “So, we’re feeling pretty good about who were are. And then, I’ve seen it go sour. I’ve been in football for 33 years so I can take it … If anybody is going to point a finger and say, ‘What got you beat?’ I’ll take it. I called the play, and I should’ve called a better one…”

The Bears are a familiar face throughout Jessamine County. Spencer had defeated East four consecutive times entering Friday. Last season, it defeated the Jags 40-8 after recording 463 totals yards in the rout.

Undaunted, East entered the contest coming off its own 32-27 victory against Lincoln County last weekend (the score isn’t indicative of the game. East pulled most of its starters in the second half). The Jaguars boasted of their own ground attack led by bruiser Aaron Fortenbery, slasher Desman LaDuke, and quarterback Kyle Gann.

However, both squads failed to provide much of an offensive showcase throughout the first quarter. They both went three-and-out to open the game. East did enjoy the first momentum swing in the contest after its defense came up with a stop on 4th and 2 late in the first quarter.

East then nearly struck first on the ensuing possession, but Gann’s pass to a streaking Storm Wilson slipped through Wilson’s hands and onto the ground of the end zone.

From there on out, it was all Spencer in the second quarter.

Brandon Leff — Spencer’s leading rusher entering the night with 305 total rushing yards — placed the Bears on the board first with 9:50 remaining in the first half after his 23-yard touchdown run. East would block the extra point, 6-0.

Spencer would add another touchdown as Smith returned a punt 72 yards, which increased the Bears’ lead to 13-0 with 59 seconds left in the first half.

The Jags entered the half with just 51 yards of total offense.

Facing its largest deficit of the season, East displayed the gumption in the second half needed of an elite team. The Jags promptly opened the half with a 73-yard scoring drive that was capped off with a one-yard Aaron Fortenbery touchdown run at the 8:48 mark of the third quarter.

Spencer would counter, however. Smith caught a nine-yard touchdown pass that increased the lead to 20-8. The back-and-forth began as Fortenbery scored his second touchdown of the night on an eight-yard scamper with 2:35 left in the third.

“Our kids fought their tails off,” Bowlin said. “We were down 14 points late in the ball game and with every reason to quit and pack it in … Our kids gave it their all. We had some injuries, and we had some kids step up.”

Smith scored his third touchdown of the night just seconds after East cut into Spencer’s lead on a 54-yard lateral. With the Jaguars now facing a 28-14 deficit with one quarter remaining and Spencer choke-holding the momentum, most assumed that the final result was a foregone conclusion.

Except for East, that is. Several timely kickoff returns set the Jaguars up with great field position in the fourth quarter. With Spencer seemingly worn out, East rode the shoulders of Fortenbery. As a result, he scored his third and final touchdown of the night on an 11-yard run with 6:44 left in the game.

East’s defense then forced a Spencer three-and-out on its next possession. The Jaguars got the ball back trailing 28-21 with 5:08 remaining.

“They slowed down,” Bowlin said of Spencer’s play in the second half. “Some of the stuff we were running in the first half wasn’t working because they were just a half step closer to the ball. We couldn’t get off the block. After they got tired and worn down, which is what our offense does to you, then all of a sudden things start working for us.”

The Jaguars’ ability to pound an opponent into submission came full circle on the final drive as they sent Fortenbery down the throats of the Spencer defense.

He carried East down to the one-yard line with 16 seconds left in regulation. The Jaguars then turned to Gann to get over the threshold, which he did on a one-yard quarterback sneak.

Just like that, East trailed by one point with nothing but a decision from Bowlin on whether to go for overtime or the win.

He went for the win.

Fortenbery’s final run came up two yards short. Spencer had held on, 28-27. Fortenbery finished the night with 219 yards on 27 carries for three touchdowns.

Though a loss is a loss, East’s ability to gather itself against a team that had all the momentum is a testament to the mental fortitude of a team that just missed out on going 3-0 for the first time since 2003.