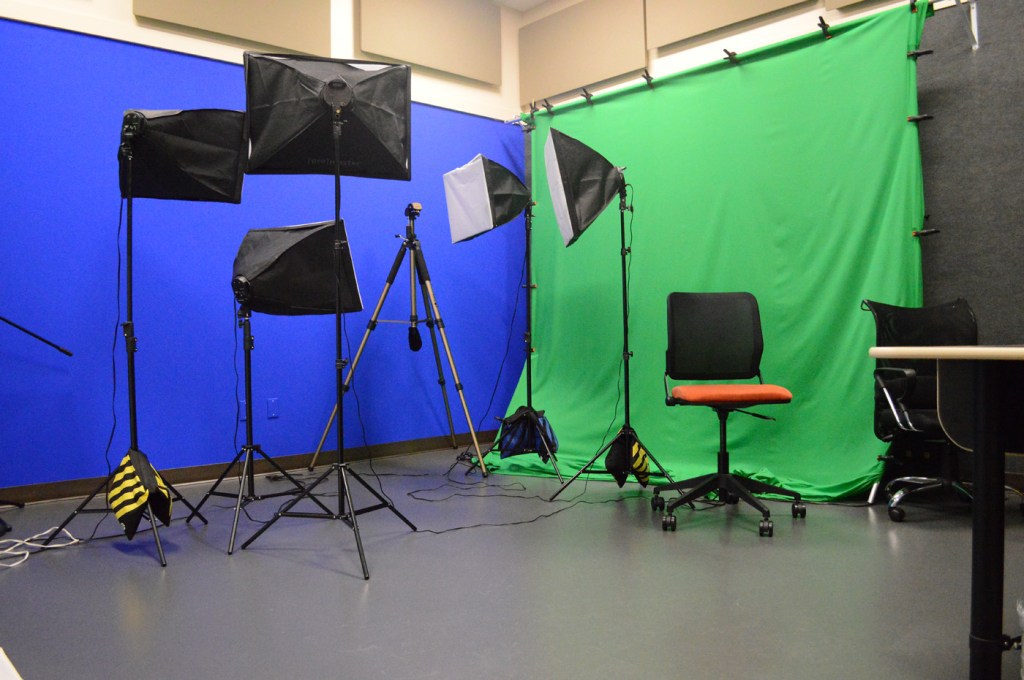 Jessamine County Public Library has much more to offer the community than just shelves of books.

“We expose people to technology that they wouldn’t normally have access to,” said Kelly Little, community relations coordinator for the library.

Last month the library received its newest upgrade, a recording studio complete with lighting, a tripod, green screen and a blue screen, which some people find works better than the green, Technology Librarian David Powell said.

The studio is set up for digital recording capabilities, and it has a Mac, so users can operate programs such as Pro Tools, Garage Band and iMovie.

“We’re going to be adding more software upgrades in the future,” Powell said.

The studio is also equipped with an 88-weighted MIDI keyboard that can be played through the computer.

“It feels like you’re playing a piano,” Powell said. “Or, it’s as close as you can get with an electronic keyboard.”

Microphones, guitar cables and digital cameras can also be checked out from the studio.

The recording studio became available to the public at the end of June, and people can schedule use it up to a week in advance.

“They are guarenteed a three-hour session if they have an appointment,” Powell said.

Since its opening, the studio has been used for about five to 10 sessions a week. The equipment was purchased over time based on the library’s budget.

Though the recording studio is the most recent technology upgrade, it is not the only one.

The library purchased its first 3D printer about two years ago, and the other four have been bought over the last six months. “We got different models to see which ones work best with the public,” Powell said.

Because they are still considered beta technology, the 3D printers experience issues every now and then.

“Probably 85 percent of the time they work just fine, if not higher,” Powell said.

So far, the preferred model is the Dremel printer which was originally manufactured to go into schools.

“They’re probably the most reliable ones we have,” Powell said. “They’re really easy to use.”

Each of the Dremel printers cost just under $1,000, which is cheaper than they used to be when they first came out, Powell said.

Like the recording studio, appointments made for the 3D printers are guaranteed a three-hour session. Most of the time people can just walk in and use them.

“It seems like I have at least one going at all times,” Powell said.

Austin  Phillippi, a regular at the library, has become quite familiar with the 3D printers. He said he has used them on 10 different occasions.

Phillippi said he enjoys being able to print pretty much whatever he can think of, whether it be game board pieces, parts for electronics, jewelry or even cookie cutters.

The printers have also been used to make pieces to a special glove that was worn by a woman who participates in wheel chair races.

The times can vary depending on the item being printed, Phillippi said. The game board pieces take about an hour each.

“It’s a learning experience,” he said.

The library also offers a professional grade laser cutter with a 12-inch by 24-inch bed. The cutter can be used to either engrave or cut all the way through certain materials.

The desired design can be entered into a program on the computer, and the laser will cut or engrave the design onto the material.

The handiwork of the laser cutter can be seen in the very building in which it’s housed.

“A lot of the signage in the library was made on the laser cutter,” Powell said.

The library also houses 3D scanners, a drill press, and a machine that turns VHS tapes into DVDs.

Anyone can come to the library to use the available technology at no charge. However they must take a two-part class.

The first half is mainly going over policies and getting a tour of the creative space, the second part can be scheduled at the convince of the library user, and it consists of learning how to use the laser cutter and 3D printer safely.

Like the equipment, classes are at no charge to library users, and once the classes are completed, any of the upgrades can be used.

After library visitors take the classes and master the technology offered, they can still expect more to come.

“We’re committed to keeping the creative space fresh,” Powell said. “I try to add some bigger piece of technology every six months.”