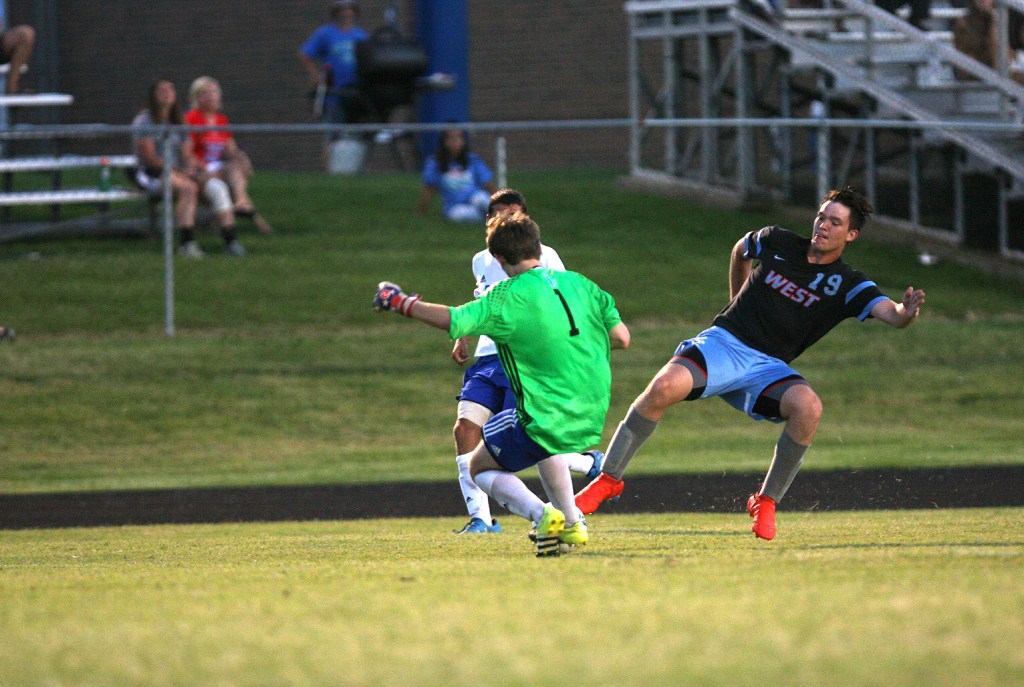 Both teams entered the contest with a combined record of 1-8-1; the lone win belonged to West after it defeated George Rogers Clark 1-0 on opening day. As a result, the rivalry took a back seat to desperation.

The Colts were able to quell the inferno of frustration as they defeated the winless Jaguars 2-1 at the East soccer fields in front of a tropically-attired and spirited Jaguar student section. For East, it was another blow in a year that has seen incremental progression and a dependence on youth throughout the young season.

The needle ticked in West’s favor prior to the game when junior Elijah Young — who had missed the past few games — alerted Sutherland that he was able to go. His absence was felt most against Lexington Christian on Tuesday when the Eagles burned West in the midfield throughout the second half.

“He called me and told me that he was cleared to play,” Sutherland said. “I was like, ‘Don’t tell anybody, because we didn’t want to deal with the emotion of all that before the game.’”

His return to the Colts “solidified the back. It made it a lot better,” Sutherland added. “Midfield played great. We were able to move the ball around. (East) set in during the first part of the first half. I’m proud of it.”

The Colts’ ability to move the ball with ease up and down the field forced the hand of East. The Jaguars struggled to sustain any offense on their side of the field, which resulted in West applying the pressure on East goalkeeper Sam Griffin.

West broke through on an Ian McCash goal with 25:02 remaining in the first half. Despite the early lead, the Colts were well aware of the need to tighten the defensive belt; as LCA proved after countering every West goal Tuesday.

The Colts must have learned, as they carried the 1-0 lead into the half and into the first 11 minutes of the second half before Isaiah Okesson etched his name into the books on a goal in the 29th minute that increased West’s lead to 2-0.

“I think he’s scored nine goals now in 11 games,” Sutherland said of Okesson’s play throughout the season and during the Bluegrass State Games. “He just keeps on scoring. We need to get him to score more than one a game. He just doesn’t get tired and he goes 120 percent the whole time. He’s the perfect example of someone who gives perfect effort all the time.”

East, however, would draw next blood after senior Jake Dickinson narrowed West’s lead to 2-1 with less than 10 minutes remaining. It proved to be a good test for West following the goal to hone their resiliency.

“It becomes 2-1 and we have to play six or seven minutes in that pressure,” Sutherland said. “Especially being here with the crowd, and we were able to come through. It’s a big learning process for a young team.”