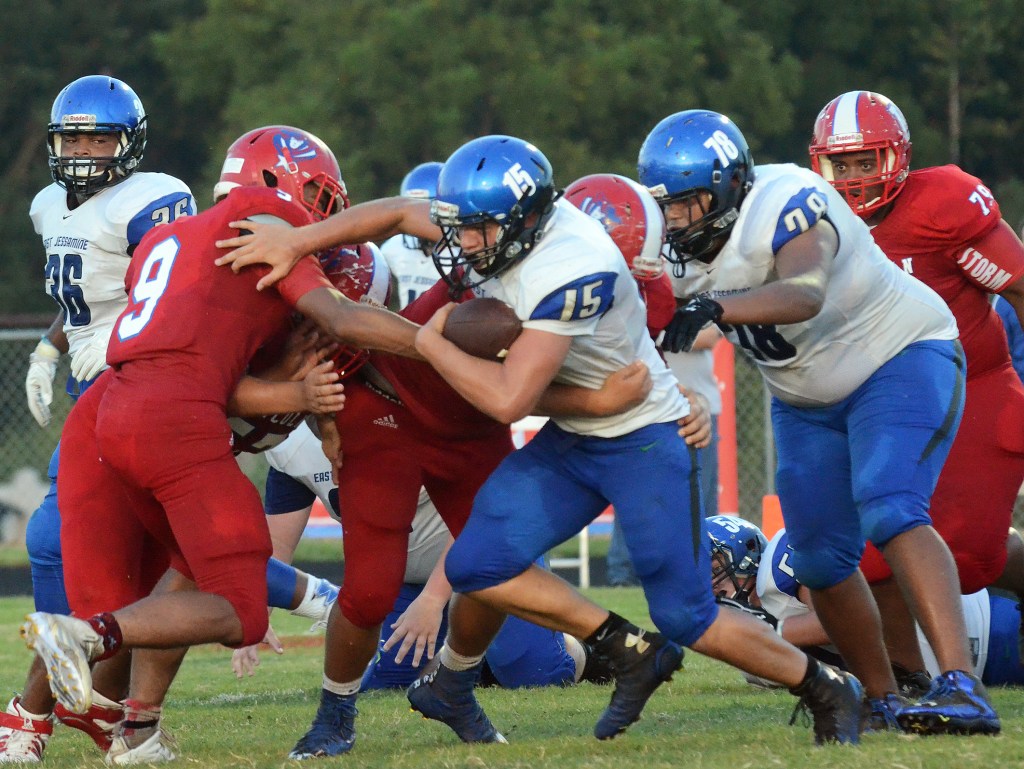 STANFORD — East Jessamine High moved to 2-0 for the first time since 2010 on Friday after withstanding Lincoln County’s 27 second-half point rally to hold on and win 32-27 at Death Valley Stadium.

After a scoreless first quarter, the Jaguars (2-0) got their claws in Lincoln in the second quarter, ripping off 19 unanswered points, then kept a firm grasp on their lead with two more touchdowns in the middle of the Patriots’ second-half scoring onslaught.

“Turnovers again. Offensively we are not very good. We’re not a very good offensive team. Our defense, we’ve put them behind two weeks in a row,” Lincoln coach Travis Leffew said. “I believe if we go and look at the clock, they were probably on the field three-fourths of the game, and the offense wasn’t. So we’ve got to figure out an offense somewhere, and we’ve got to find a quarterback. I have 100 percent belief in Josh Salyers that he can do the position. We’ve got to protect up front for him. But we’re going to go searching for some stuff this week to see what we can find back there at the quarterback position. Once we find that offense, I’ll feel comfortable about how we do as a team.”

East Jessamine rolled up 345 yards total offense against the Lincoln “D,” with Aaron Fortenbery the leading ground gainer with 142 yards and a touchdown on 25 carries.

Lincoln (0-2), which had 200 yards total offense, was on the move offensively on the game’s opening drive. Tanner McAninch, who led the Patriot rush with 36 yards on 13 carries, and Tra Carey, who went 22 yards on eight carries, carried the ball five times apiece before the series stalled at the East Jessamine 13.

Quarterback Kyle Gann, who was 2-for-5 passing for 54 yards while rushing for 69 yards on 16 carries, used both his feet and his arms to move East Jessamine along on its first drive, running for a first down then connecting for a 34-yard first-down pass to Storm Wilson on 3rd-and-16 followed by a 20-yard first-down pass to Max Darby on 4th-and-third. But, like the Patriots, the Jaguars opening drive would stall, with Lincoln’s defense stripping the ball from Desman Laduke at the Patriot 1-yard line.

Lincoln gained possession off a fumble and a fumble would take the ball away. On the second play of the Patriots’ second drive, quarterback Josh Salyers had the ball knocked out of his hand and East’s Connor Hearn was there for the scoop-and-score, running the ball in from the 6-yard line for the first of the Jaguars’ three second-quarter scores.

East got the ball back just as quickly on the ensuing possession as Bryce Feck picked off Salyers at the Jaguars’ 24. Ten plays later, Gann scored on a 6-yard keeper for a 12-0 lead. The Jaguars were looking at a long drive after a 39-yard punt by Lincoln’s Trey Cummins pushed them back inside the 20; however, an illegal shift penalty against the Patriots forced a re-punt. Cummins didn’t get a chance to get off a second punt, with a low snap getting past him and he was tackled at Lincoln’s 25. Three plays later, Fortenbery scored from the 1 for a 19-0 ballgame.

“They do a great job with their scheme,” Lincoln coach Travis Leffew said of the Jaguars’ offense. “They run four or five plays and they do a great job of it. Their line does a great job up front. Defensively, we were strong there in the first quarter, but we started letting down a little bit in our gap, playing our linebackers flowing over top. So we’ve got a little to work on.”

While it appeared East Jessamine may have set itself on course for a blowout with a 19-0 halftime lead, somebody forgot to tell Lincoln as they turned it into a real ballgame in the second half.

After holding East to a 3-and-out on the first series of the half, Lincoln came up big on the punt, with Christian Vergara blocking the punt then grabbing up the ball and running it in from the 13-yard line for the Patriots’ first touchdown.

Lincoln had excellent field position on its first offensive drive of the second half, following a McAninch punt return. East was driving inside the Lincoln 30 before Emmanuel Beasley sacked Gann, dropping the senior QB back to the 42 to make it 4th-and-24. McAninch fielded the punt and had the Lincoln fans on their feet as he scooted 76 yards to the East 11. He carried the ball in on the following play then Emma Kaiser booted the second of her three PATs to make it a 19-14 ballgame.

East would interrupt the Lincoln scoring surge with an eight-play, 54-yard drive to the goal line late in the third quarter. Fortenbery had two first-down runs in the series and Laduke had one first-down run to help move the ball to the Patriot 1. Then Gann took it on in with a push up the middle for a 25-14 margin.

The Jaguars extended their lead to 32-14 with 8:04 left in the game, with Fortenbery scoring East’s final touchdown with a 6-yard run. The score was the culmination of a three-play, 75-yard drive, which was moved along by a 68-yard run by Fortenbery.

Three minutes later, Lincoln was back in the end zone. A roughing the passer penalty on East and a 41-yard pass reception by Noah Horton helped advance the Patriots to the 4, and McAninch capped off the drive with a 4-yard score to make it 32-21.

Lincoln got the ball back on downs at its own 25 with 2:20 to play. The Patriots were back-peddling before Salyers, who had 25 yards on five carries, broke for a 17-yard run then after a first-down pass from McAninch to Carey, McAninch hit David Brock in the right corner of the end zone for a 35-yard TD pass to pull the Patriots within 32-27.

And what did the Lincoln mentor say at the half that enabled the Patriots to almost pull off the win?

“I just challenged them,” Leffew said. “I said, ‘The first half is over. It’s 0-0. Let’s come out the second half and let’s match their intensity and play with heart.’ They came out in the third quarter and it was fun. They made football fun, so it was great to see that.”

East successfully fielded the ensuing onside kick and  —  with just 44 seconds to play — all the Jags had to do was take a knee twice to run out the clock.

“They are a good offensive football team. and defensively do a good job of keeping you under control,” Leffew said of East. “This game is behind us now. And hopefully we can learn from it. We’ve just got to go watch film and learn from it and get ready to go into next week against Garrard County.”