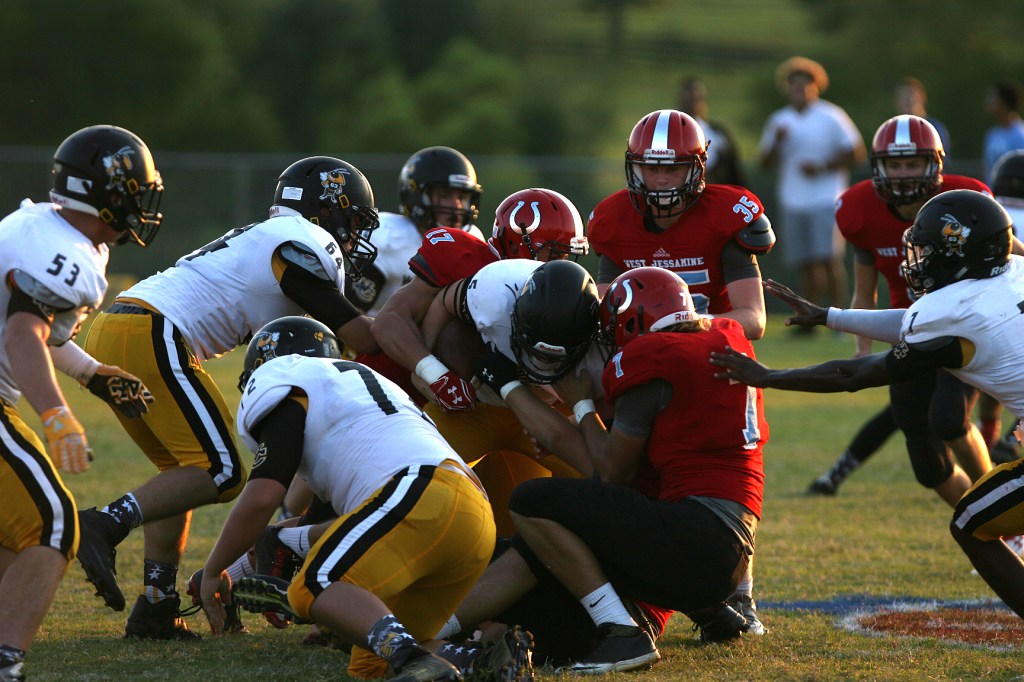 If West Jessamine High had any lingering memories of its opening-season victory over Harrison County last weekend, they were promptly squashed on Friday by a visiting Woodford County.

The Yellow Jackets utilized a myriad of weapons against a Colts defense that entered the matchup riddled with injuries sustained throughout the week. As a result, Woodford pounced on West from the onset and rode a 28-14 victory into the darkness of the Nicholasville evening.

“We got hit in the mouth and we didn’t handle it too well,” West head coach Yancey Marcum said following the game.

After the Colts thumped an underwhelming Harrison County to begin the season, they were  tasked with handling the multi-pronged offensive attack of Woodford, led by quarterback Malik Richards. The Yellow Jackets’ athleticism was on display as they danced and burst their way through a suddenly tackling-inept West defense.

“We had a lot of missed tackles,” Marcum said. “And we don’t miss tackles. We were kind of freaked out because they had some athletes back there. We just got a little overexcited.”

It didn’t take long for Woodford to leave its mark. The Yellow Jackets jumped out ahead of West 6-0 on a quarterback sneak with 3:39 remaining in the first quarter. This followed an impressive opening drive by West that ended only after a failed field goal attempt on 4th and 7.

Evidence that the night belonged to Woodford happened just prior to its first touchdown of the night when West’s Thomas Krupp and Josh Jasper crunched Richards to force a fumble; however, the ball bounced up the field and into the arms of a Yellow Jacket for a positive net gain.

Adding insult to injury, Krupp would leave the game with a right arm injury he suffered on the play. He was the fourth West defensive player lost during the week.

Woodford would tighten its grip on the lead when Richards hit senior Xavier Higgins to put the Yellow Jackets ahead 14-0 with just 27 seconds remaining in the first quarter.

The game continued to spiral out of control early in the second quarter when West’s Allen Horne fumbled the ball into the waiting hands of Woodford. The Yellow Jackets promptly scored again on a Ben Bruckner touchdown run to increase their lead to 21-0.

The Colts entered the half trailing for the first time this season.

“We came out in the first half and lost focus because of some things that were going on with injuries,” Marcum said. “Then it was hard. They had a couple of kids that were athletic and it wasn’t as easy as we wanted it to be.”

The play of West throughout the half forced the hand of Marcum. The tribulations proved to be the perfect segue into a lesson about life and adversity.

The Colts burst into the second half like a man possessed. West cut into Woodford’s lead just four minutes into the half and then narrowed the deficit to 21-14 late in the third quarter on a Marcus Jones touchdown pass.

And just like that, the momentum swung West’s way.

“The first half we were jumping offsides, missing tackles and just wasn’t prepared,” Marcum said. “We came out in the second half, and in my heart, I’m sitting here thinking we’ll win the game before we threw that pick.”

As for that interception. It was about as untimely a play as a team will ever have; think Super Bowl XLIX. With the momentum, flush with confidence, and with Woodford on the ropes, the game was West’s to lose.

After Jones hit Greer Stone deep during a potentially game-changing drive near the Woodford goal line in the fourth quarter, Jones rolled to his left on the ensuring play and lofted a pass into the endzone that was subsequently intercepted by Woodford’s Richards.

Richards darted through West’s offense and sprinted along the Yellow Jackets’ sideline for the game-defining touchdown, 28-14. It was a 14-point swing on what should have been the tying score.

“All the momentum was ours,” Marcum said of the play. “We had a bunch of kids believing in their team, in each other and fundamentals. I thought, ‘We’re going to score, we’re going to keep believing and we’re going to win this game.’ The ball just didn’t bounce that way.”

West ran a bootleg on the play against Woodford’s man defense, which typically allows the offense the ability to open the field with crossing routes. It just didn’t work out on that given play.

“It’s just a heartbreaker,” Marcum said. “That kid’s fast… If we tackle him, we probably were going to get a stop on defense and get the ball back. That was really heartbreaking to see him go the whole way. I watched him catch it and I’m thinking, ‘Just tackle him.’ But we couldn’t run foot-to-foot with him.”

Despite the first half struggles, and unfortunate turnovers, the resiliency of West in the second half is a positive sign that this young Colts team is trending in the right direction.

“I challenge them to understand that we are on a journey, on a mission,” Marcum said. “And that mission is to work hard every day and get better. And you can’t get ahead of that. You can’t think that you have arrived; you can’t thing that you’re already good at this. Every day has to be focused; I know they accept it.”