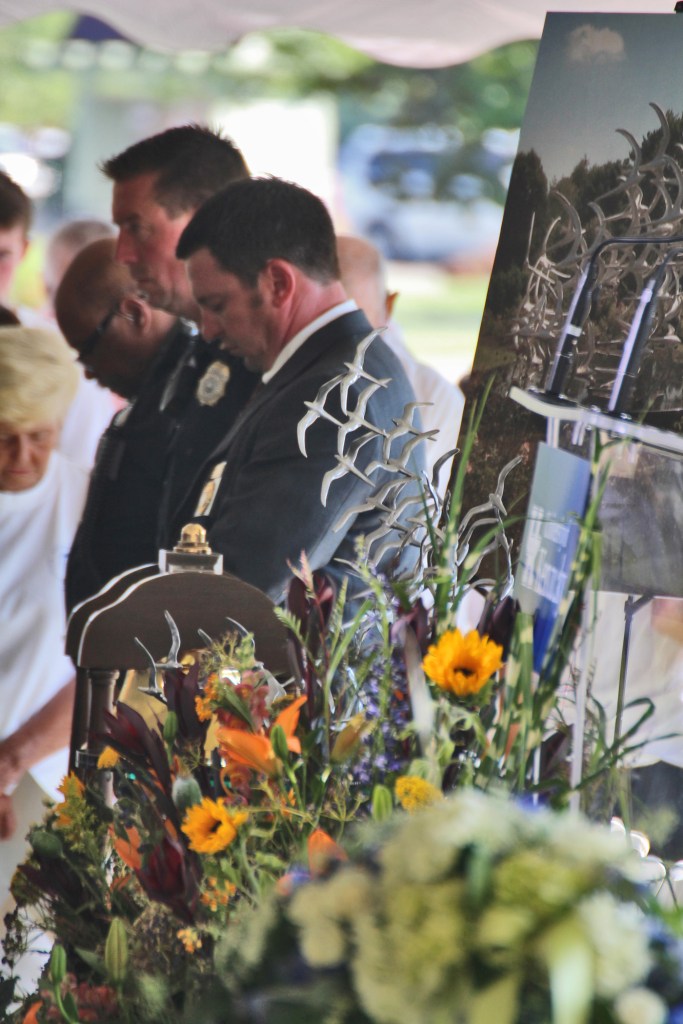 The days, weeks, and months to follow were filled with stories about the 49 lives lost, coupled with investigations into what caused the crash.

Only one person survived the wreck — First Officer James Polhinke.

Hundreds came to the UK Arboretum Saturday morning — 10 years to the day after the wreck and five years after the flight’s memorial sculpture was unveiled — for a 90-minute service remembering those lost.

Friends and strangers comforted each other beneath a cloudless sky; several listened from a distance, hiding in the shade and crying. The Red Cross passed out water bottles for the heat and tissues for the tears.

“We are here in sorrow, to begin a new decade of living with our loss. We are here to express our deep compassion and we are here to find hope for tomorrow,” Gray said during the ceremony. “We are not turning a page on the past; we are writing the next story for a new decade of how we shall remember to live.”

WVLK personality Jack Pattie read the names of those who died as a bell was rung by first responders Bryan Jared, Pete Maupin and Jon Sallee. The service was peppered with prayers and a sermon of sorts from Southland Christian Pastor Jon Weece, who put his thoughts on the tragedy down on dozens of poster board sheets, which he held up one after another in total silence.

After the service ended, a bird release was held next to the memorial sculpture.

Danville and surrounding communities were affected, as nine of the 49 had connections to the community:

• Bart Frederick of Danville was a father of three and was planning to scope out his family’s future home in Georgia;

• Bobby Meax, a Harrodsburg native and graduate of Harrodsburg High School, was traveling for work to Atlanta;

• Clark and Bobbie Benton of Stanford were taking a trip to celebrate her 50th birthday;

• Centre College graduate Scarlett Parsley Hooker and her husband John Hooker were newlyweds of only 12 hours;

• Rebecca Adams of Harrodsburg was a mother and horse farm owner and was traveling for work to California; and

Tragedies like this are something that Mike Wilder has become all too familiar with. As a deputy coroner in Boyle County, Wilder is a member of a team of coroners from across the state who respond to emergencies that have mass fatalities, such as following the fire at the Beverly Hills Supper Club.

The day of the crash stays in his mind.

“I had received the call from the coroner’s office in Fayette County of what was going on, that we needed to activate our response team,” Wilder said. They knew, he said, that they would need the extra help.

“My initial thought was, ‘Who was on there; would it be someone I knew?’”

Billy Demrow, one of the members of the team of coroners and a native of Lincoln County, dealt with that first-hand. It was his sister, Bobbie, who was traveling to celebrate her birthday.

Demrow declined to discuss the event, but said he decided to respond with the other coroners because he felt he was needed.

It was about 2:30 p.m. that afternoon when the coroners arrived on the scene. With the help of the Lexington Fire Department, they went to work.

“You become a little bit immune when you’re doing that type of work,” Wilder said. “You go into a different mode … you almost get blinders on. You know you’ve got a job to do and you don’t think of the real impact that it’s having on you until after the fact.”

Storms were heading for Kentucky at the time, so the coroners were focused on getting everyone out before the bad weather arrived.

“And we did,” Wilder said, adding that the last person was recovered from the wreckage at about 8 p.m. “That was when the real work started.”

It took a few days to obtain everything needed to identify all of those in the crash. There were passengers from out of state and even out of the country — one couple was from Japan. By Thursday, they were finished.

“We worked it as well as we possibly could,” he said.

Thoughts of that day remain with Wilder, who said he had flown in and out of that airport many times.

“When you’re going south, that’s the flight you take, as a rule,” he said. “I have since taken that flight again, that early 6 a.m. flight that leaves and goes to Atlanta. You think about it. It crosses my mind.”