A Renaissance for Nicholasville 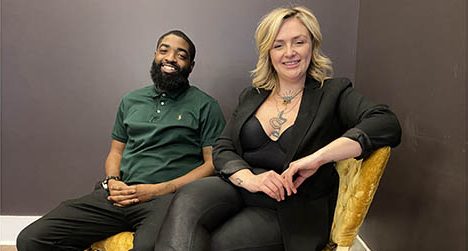 Proprietors Brita Meade and Chase Bread have big plans for the shop and say they offer a high-end experience for Jessamine County. (Photo by Gillian Stawiszynski)

Downtown Nicholasville has a new edition to its hair scene; the Renaissance Barbershop and Salon.

It is not the first time the building that houses the shop has been a spot where locals can get a trim.

103 East Maple Street has a legacy of being home to many barbershops. On Thursday, Dec. 1, Chase Bread and Brita Meade decided to continue that legacy and signed the lease to the building. As of Thursday, Dec. 15, they are open for business.

Bread and Meade are in a relationship and initially met while working at Prince Cuts in Lexington.

Bread lives in Stanford and started cutting hair when he was 13.

“My grandmother was a cosmetologist. My uncle was a barber. My mom braided hair. My cousin still braids hair. It’s just kind of like a lifelong journey. I knew I was gonna cut hair by the time I turned 14,” Bread said. He said that he was his guinea pig when he started cutting hair.

Meade is originally from eastern Kentucky but has lived in Richmond most of her life. Her three-year-old cosmetology career has been solely in Lexington. Before hair, she made jewelry with Tiffany and Co.

“I went to art school. I was a metalsmithing major. My master’s was in education,” Meade said she left Tiffany and Co. for her mental health.

“I was stuck in a job that was slowly becoming something that it wasn’t when I started. And my best friend’s a cosmetologist, and she was like, ‘You would be so good at hair, just make the leap, make the leap.’ So I cashed out my 401(k) and lived off of that.”

Being a single mother, Meade had to use her retirement savings to take care of herself and her children and attend cosmetology school for 40 hours a week.

The two went to cosmetology school and barber school in the same year.

What are their plans?

“We wanted to bring [Nicholasville] an upscale, high-quality traditional barber and high-quality cosmetology services. I offer Brazilian blowouts, I do hand-tied extensions, I do a lot of vivid clients, and I have alternative hair clients,” Meade said.

The barbershop provides facials and steaming services along with cuts and trims.

Before the new owners moved in, the shop had a soft eggshell color. Now, the room is a deep purple, and a light scent of sandalwood and myrrh welcomes patrons. But- the couple has more in store for the Renaissance Barbershop and Salon.

Bread would like to host some UK games in the future for patron entertainment.

They’re family oriented; Meade’s children helped set the shop up. The shop offers kids cuts, and for kids just tagging along, the shop has chess, checkers, and dominos. In the future, Bread said he plans to offer math help, like multiplication table practice for kids under 12.

Of everything in this journey, the two are most excited to connect with the Nicholasville community and get to know people. They’re also open to welcoming local stylists to the team in the future.

Bread said the only thing he knows about Nicholasville is that Wendy’s has a “really good” number six meal.

But he plans to be part of the Christmas parade with the townspeople next December, mingling at farmers markets and other local events with Meade.

Meade said they’re both “people-people.” She and Bread often go down to Joe’s Cock and Bull- the pub across the street and talk with locals all night.

“We’re creatures of habit. We like to know where we are,” Meade said.

Other than following their goals, opening this shop is Bread and Meade investing in downtown Nicholasville.

“People in the last year slowly started investing in what Downtown Richmond used to be like I hear people say ‘Oh, I love downtown Nicholasville’ like they forgot about it!” Meade said. She believes this experience has already been rewarding.

“I’m really excited for this, though. I think it’s a great opportunity for us and Nicholasville. A chance to grow. We can watch each other grow,” Bread said.

The shop’s hours are listed on google or the Facebook page by its name: The Renaissance Barbershop and Salon.

All members of the military, the police department, and the fire department get 10 percent off on all services.