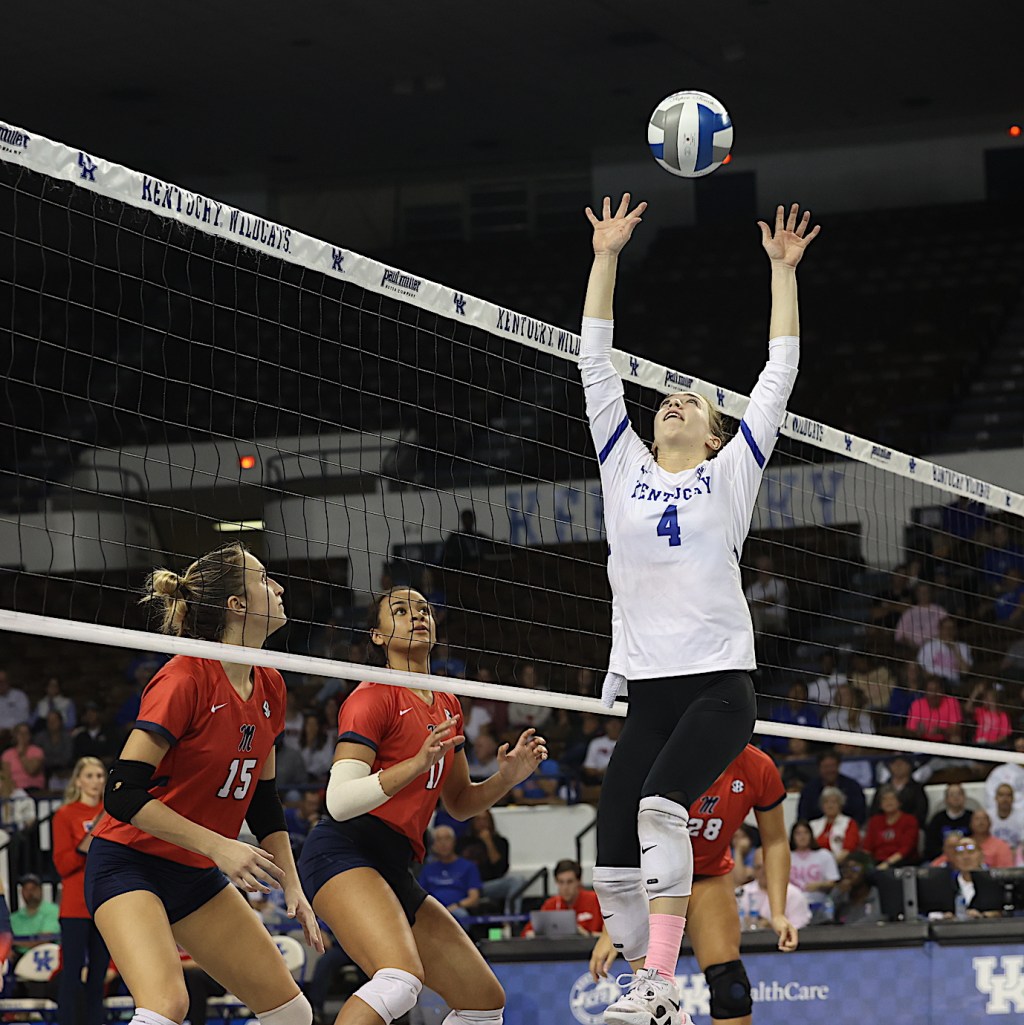 Setter Emma Grome, the SEC Player of the Year, says she has numerous options for her passes and that makes her job easier. (Photo by Vicky Graff)

For the fifth straight year, Kentucky volleyball had the Southeastern Conference’s Player of the Year when league coaches picked sophomore setter Emma Grome.

Grome found out she had won the SEC’s top honor via social media.

“I heard about it from Twitter and Instagram, but I was really honored and I think it shows a lot about our team,” Grome said after UK’s first NCAA win. “We have so many good hitters on this team and as I was able to do today, we keep it really balanced.

“I think just having so many different options makes it really fun for me because I can have a little bit more freedom to be deceptive and I have a lot of confidence in my hitters, so they definitely help.”

Coach Craig Skinner says the balance in the UK offense is a coach’s dream.

“There are times I have no idea where Emma will set the ball and I have no idea I am pretty sure the (opposing) middle blockers don’t either,” Skinner said. “Having plenty of options makes (opposing) coaches spend time in the video room preparing for us but there really is no way to tell where Emma is going with the ball.”

Kentucky will play San Diego Thursday at 8 p.m. EST in Palo Alto, Calif., on ESPNU San Diego advanced with 3-1 wins over Northern Colorado and Washington State while UK swept Loyola-Chicago and Western — the Cats have won five straight matches, all by sweeps. The Palo Alto regional final will be Saturday at 10 p.m. EST on ESPNU. Host Stanford and Houston meet in the other match Thursday.

“We like going into someone’s house and kind of taking over and that’s a lot of fun and the routine is always the same there and we’ve tried to make sure that’s the case at home as well,” Kentucky’s Azhani Tealer said. “So, testament to our coaching staff and how they keep things the same and it’s fun to go in and kind of take someone’s house over.”

Grome said the main thing is just to keep focused on what lies ahead.

“We played a very tough schedule to get us ready and we are playing our best right now,” Grome said. “Everybody is doing what they should be doing and that’s what just has to continue.”