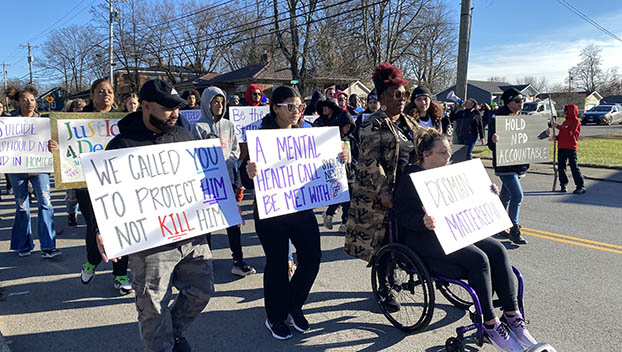 Protestors, family, and friends gathered at Clint-Hayden Park in Nicholasville for the third protest held for Desman LaDuke, the 22-year-old Black man who was shot and killed during a mental health crisis.

The Saturday, December 3  protest was warmer, with more sunshine than last time. The crowd was smaller but louder. Medics and legal observers were also in attendance. A few protestors from Louisville showed up to support the community and family, too.

The group took the same path as the last time. They walked towards LaDuke’s home, then to the Jessamine County Courthouse, and back to the park.

Things were different from the second protest. In the front yard, the family stood in a group hug with a few organizers. Some of the family and organizer Jay Calhoun walked to the back of the house- where Nicholasville Police Department officer Joseph Horton shot LaDuke.

Organizer Sarah Williams signified this as the moment for LaDuke’s soul to “make the transition.”

Once the group made it to the courthouse lawn, LaDuke’s Brother, Kahnan Leslie, ran around the perimeter of the front lawn. He was almost skipping as he cheered, “Ay! Ay! Let’s go!”

After the protest, Leslie admitted that he felt LaDuke’s spirit moved through him while at the Fiscal Court. He remembered waking up LaDuke to join him for his football practice, even though he hated waking up early. Leslie said LaDuke would cheer him on just as Leslie cheered on Main Street.

Leslie acknowledged the sorrow and hope of the group.

“Knowing we’re getting progress from this already and we’re still gathering together, that’s even more beautiful,” Leslie said.

“It’s a day-to-day struggle. Thanksgiving was the worst because that was his favorite holiday. He always said he wished every day was Thanksgiving, which was the hardest day yet to get through. But we’re strong and united as a family.”

Marks had suggestions for the City of Nicholasville and Jessamine County.

“My main thing that I would like to see implemented as soon as possible is that other states have already enacted laws to approve the 988 for the [Suicide and Crisis line] to where the Police are the last resort,” she said.

The family’s attorney has already started working on this. Still, Marks said there’s “no reason that it shouldn’t already be adopted.”

Williams then brought up the CAHOOTS program launched in Eugene, Oregon, could be used in Nicholasville. This program works in conjunction with the police. It allows for a team of social workers and counselors to be the first responders in mental health situations.

Although things are moving at a snail’s pace, according to Williams, demands are still being met.

After the last protest, the NPD met a demand from the group. The NPD put Officer Joseph Horton, who shot LaDuke, on administrative leave. The night before this protest, NPD met another demand. The organizers received the policies that govern the NPD and its sworn officers. They also received the personnel file for officer Horton.

During the last protest on Sunday, November 20, the NPD was barricaded, and deputies from the Jessamine County Sheriffs’ Officer showed up unannounced, which was not taken lightly by any of the protestors.

“When you’re a person with melanin to your skin in this country, you have a very sixth sense about someone who’s of a mindset that could be detrimental to you and your life and your well-being,” Williams said.

This time, the NPD was not barricaded. Instead of just showing up to the protest, someone with the Jessamine County Sheriff’s Office reached out the night before, stating they would like to help.

“Maybe that’s a step in the right direction cause this was never supposed to be a ‘We’re coming to your face, and it’s gonna be awful, and we’re gonna be destructive.'” Williams said.

In terms of the standing demands, Williams stated she would still like to see Officer Horton fired and an investigation by the department of justice into the Nicholasville police department.

As a registered nurse, Williams often deals with individuals going through mental health crises, “We need to have a real conversation about why when you cross that threshold of the hospital, we cannot inflict harm, or it’s our license. But the police can- and there’s little to no recourse every time.”

Williams also wants to see civilians become a part of the police Disciplinary Review Board in Nicholasville.

“Folks who are the people encountering these officers are going to be more aware of the problems that need to be addressed,” Williams said.

She said that soon, protestors and concerned community members look forward to having conversations with the government leaders of Nicholasville, Jessamine County, and, the NPD.

This protest is not the last time organizers, family and friends will convene for LaDuke.

“So, as I said at the first protest, it’s a marathon, not a sprint. And we’re here for the duration,” Williams said.