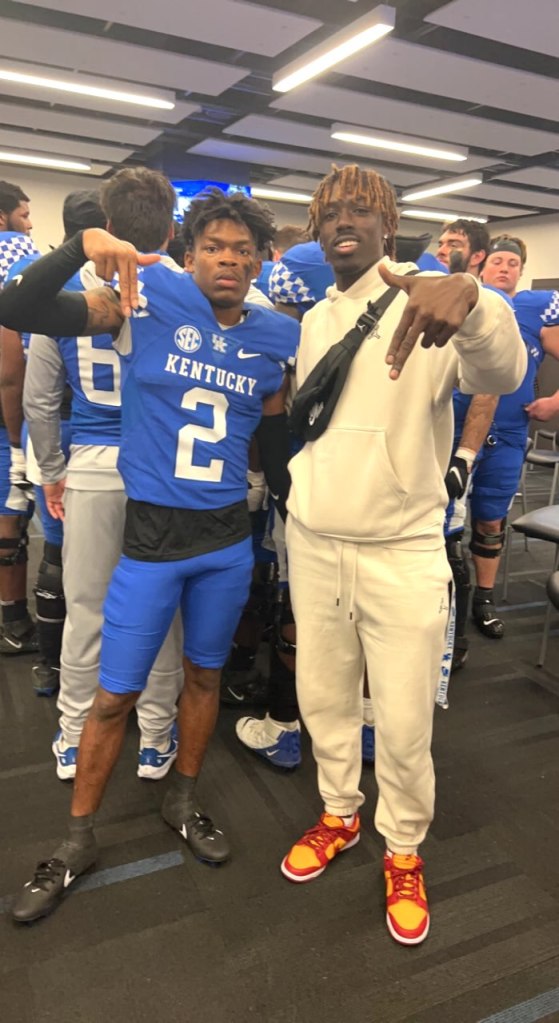 Before his junior season started, Nashville four-star receiver Shamar Porter and his parents wanted to make trips to several schools he was considering for his college career. However, they took a slightly different approach.

Instead of driving to college campuses on different trips, the family rented an RV and traveled to several states on one trip to look at schools. One was Kentucky, where he verbally committed on Jan. 28.

“Those were basically my official visits. Me and my parents visited the school where I thought I should go before I committed,” said the 6-3, 180-pound Porter.

He attended a camp at hometown Vanderbilt and then went to camps at Clemson, Georgia, Cincinnati and Kentucky along with a few other places.

“It was really a fun thing to do. Dad wanted to try something different, so he just got us a RV when it was time to get serious about where I was going,” Porter said. “We drove to different schools and then back home. It was pretty much all football talk. I knew I had to make my decision because schools might not always wait on you because they have spots to fill.

“We just came to the conclusion that Kentucky was right for me. I got along well with all the coaches. You can talk to coach (Mark) Stoops and feel comfortable and know you can trust him. I got along with other coaches at other schools, but it just was a different connection at Kentucky.”

He liked the Kentucky offense — Liam Coen was the offensive coordinator when he committed — along with the facilities to help develop NFL players.

Porter is one of the highest-ranked players in Tennessee and a top 30 prospect nationally at his position.

He knows Kentucky freshmen Barion Brown, Destin Wade and Keaton Wade, who are also from Nashville. They once played on a 7-on-7 team together.

“I have friends on all the top SEC teams and talked to them about college ball,” Porter said. “I have talked to Barion. He said I have nothing to worry about. He made me feel not so pressured and let me know my time was coming. He lets me know things about practice, schemes, plays.”

Porter says he is not a “hyped” player who will be screaming on the field.

“I am more relaxed and just want to do my job,” he said.

Brown has had a phenomenal freshman season at UK already going into UK’s game against Iowa in the Music City Bowl in Nashville on Dec. 31. Porter is bigger (he is 6-3, Brown 5-11) but Brown is faster — he has a 100-yard kickoff return this season.

“He is crazy fast. I raced him in the 100 (meter dash) last year. Once he catches the ball, he just takes off,” Porter said. “I have to try and make sure my routes are smoother.”

In 2021 he had 33 catches for 495 yards and seven scores before a torn labrum kept him out of the postseason. He had 32 catches for 557 yards and 10 touchdowns in a 7-4 season when he said he was normally double or triple teamed. He also returned punts but said he would like kick returns to Brown at Kentucky.

Porter ran the 100 in 10.87 seconds last track season and barely missed setting a school record, something he says he will “definitely” do this season. He will not enroll at UK in January because Ensworth does not let students graduate early. Porter is not worried about that leaving him behind others at UK.

“My expectations at Kentucky are to make sure I get developed mentally and physically on and off the field not just for football but so I can grow as a man,” he said. “As a team, I want to play for my team. I am not selfish and into making highlights. I just want to do my job.”

Even though he has been committed to Kentucky since January, teams have continued to reach out to Brown about flipping his commitment. Georgia and Tennessee have sent him more mail than any other schools.

“It’s not as bad as before I committed when the mailman used to wrap letters in rubber bands and sometimes he could not even get it all in the mailbox,” Porter said. “I remember coming back from spring break and I had about 50 or 60 letters from 10 more schools that we spread out across the whole floor in my house.”

Porter feels fortunate that his parents have been such good mentors for him. His father is a personal trainer and former body builder while his mom is a licensed therapist who helps with the “mental piece” of his game.

“Dad helps me with physical stuff. We lift after school,” Porter said. “Mom works with me on psychological stuff on weekends. She really encourages me. I once wanted to go into sports medicine but now because of my mom I want to be maybe a therapist or sports psychologist.”