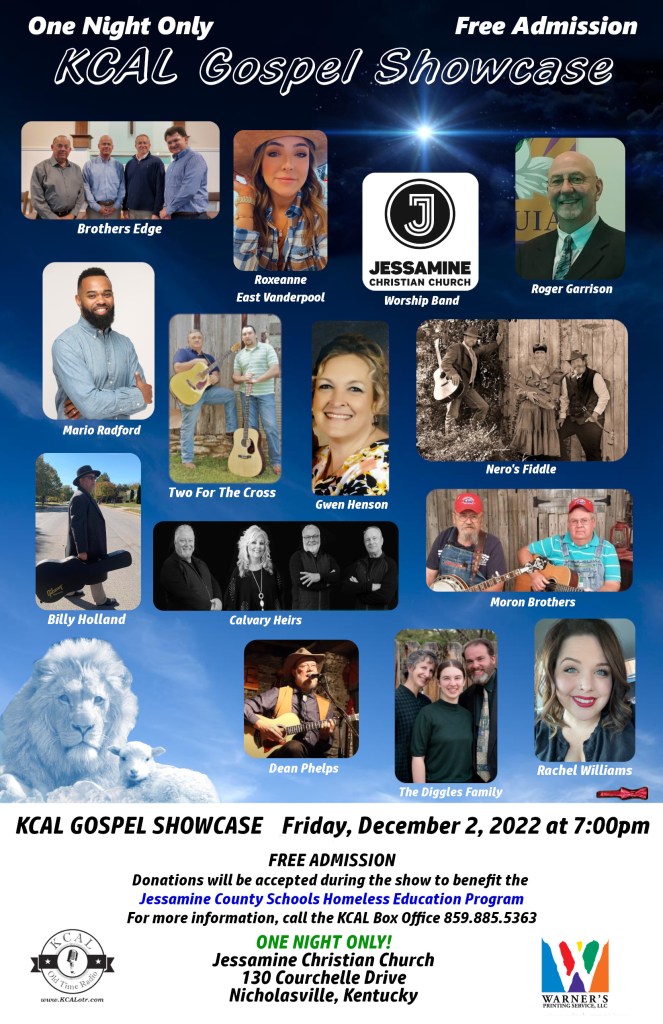 Along with America’s housing prices, the rate of unhoused Americans continues to rise. According to their count, there are currently 341 students who classify as homeless in Jessamine County Schools (JCS). Each year, KCAL Old Time Radio staff, a 501(c)(3) nonprofit organization, comes together to help these students with a gospel showcase.

Homeless Liaison of Jessamine County Schools (JCS), Shainey Marcus, said that the average age of unhoused people in America is nine years old. JCS does receive some funding for Title I schools, which are schools with high poverty rates. But, schools can only use these funds for academic purposes. Only a minimal amount is set aside for the welfare of students.

Marcus says most kids aren’t just out on the street or in shelters. It can be unsafe for women and children in abandoned buildings, shelters, and cars. So, these groups will often double up with friends, family, and “well-meaning citizens.” according to Marcus. “Kids will find kids to hang out with.”

The United States Department of Housing and Urban Development, or HUD, labels many situations as homelessness. At JCS, 300 of the 341 children double up with other families. 26 JCS students are in hotels and motels. Two students have been at the JCS homeless shelter since moving out. Fifteen of their students are in unsheltered situations- in a car, a camper, abandoned buildings, or condemned buildings.

In the fall of 2019, Doug Fain, the director, and producer at KCAL Old Time Radio, interviewed Marcus on WNJK 105.9 and decided to adopt the JCS homeless program permanently. This means that from then on, KCAL gives all proceeds from the gospel showcase to the homeless program at JCS.

Marcus said that even when families find housing, they could be evicted soon after from having to pay for essentials, which can keep families from being able to rent.

“They’ll need things like simple things like you, and I have all the time we don’t think about it,” Marcus said. These families move in, and besides food, they need essentials like utensils, oil, and milk. “If you’ve been homeless for quite some time, or you’ve had to live with someone else, you move into a place with nothing generally.”

Unlike Title I federal monies, donations can go towards helping families with children and unaccompanied children with necessities. It can be the difference between walking to school in flip-flops on a Winter day or being able to stay warm.

“This year. [Shainey] told me there was a young lady who was, I guess, a senior at one of our high schools, living in her car. She was alone. She called Shainey one day frantic because her tire had blown out, and she didn’t have a way to get to school, and she didn’t know what to do. So they put new tires on her car so she could get around. That’s our money that helped her do that,” Fain said. “You know, they’ve done all kinds of things like that with this cash. And we are so excited to hear these stories. It’s very sad. But it makes us feel really good, and all the people who donate it because we know we did it. And we did it with a night that everybody loves.”

So far, Fain and the KCAL team have raised $15,000 for these students. Even through COVID, the group hosted the gospel showcase on Facebook Live, raising about $4,000. When the event was back in person last year, the showcase raised more than $5,000, the highest amount they’ve raised in a single show thus far.

Everything that goes into the gospel showcase is donated: the performers’ time, the work of the KCAL team and other volunteers, the posters, the Jessamine Christian Church space, and the audio equipment.

The show’s performance centers around Jesus Christ but welcomes everyone. This year, there will be 14 performances, and each one will perform two songs.

“We’ve got Roger Garrison, the song leader at church in Lexington, who does more of the traditional hymns. Whereas Mario sings more contemporary stuff, Billy Holland sings songs he wrote on his own. Two for the Cross is more country. You know, the genre is there. Nero’s Fiddle is Appalachian. They use a dulcimer and stuff. I mean, it’s completely different sounds, and everybody enjoys everything,” Fain said.

The show starts at 7 p.m. on Friday, December 2, at the Jessamine Christian Church on 130 Courchelle Drive. The event is free, but Fain encourages donations during intermission. Fain said the showcase is always a packed house. Those who plan to attend should be there earlier than 7 p.m. The proceeds will be given directly to Marcus and Superintendent Matt Moore at the show’s end.

Marcus said much of the donations from the show will go towards buying gifts for teens who usually get left out of holiday gift donations. She will also spend donations on warm clothes and help children in emergencies. “Like we had these two children, they were small little girls in elementary school; they were fleeing a violent situation in Florida, they were living in a camper here and had no clothes, they had no winter clothes at all. So we bought them like, you know, little boots and coats and because they came with nothing.” Marcus said.