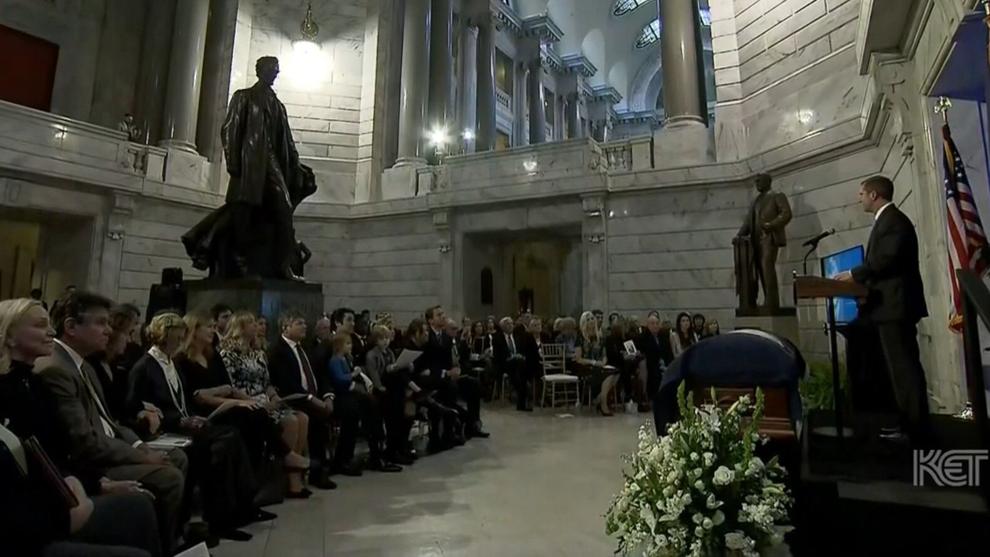 Former Gov. John Y. Brown, Jr., who died last week, was remembered by friends, family and others during a private memorial service in the State Capitol Rotunda Wednesday afternoon.

While the event was private, it was broadcast statewide on KET, giving all Kentuckians a chance to watch, and hear from family and friends of the former governor.

Current Gov. Andy Beshear said his relationship with Brown went back to when he was a member of the Governor’s Scholars program, which Brown created.

“I stand here today as the first Governor’s Scholar to serve as Governor, but know I won’t be the last,” Beshear said. “It never would have happened without that program that helped my find my confidence and ultimately my way. GSP has done the same for many other Kentuckians, now in its 40th year, still helping to positively shape the lives of our youth.”

Beshear also spoke about Brown’s philanthropy. “He helped establish the Sanders Brown Cancer Center on Aging at the University of Kentucky, and he was influential in creating the Muhammad Ali Center.  He built the Pamela Brown Auditorium at Louisville’s Actors Theatre, in honor of his sister, and helped fund the downtown YMCA.”

His daughter, Pamela Brown Wright, a CNN anchor and reporter, said, “My dad had a knack for making his dreams come true. It’s no coincidence that his favorite song was ‘The Impossible Dream.’  It also didn’t hurt that he had these lively, sparkling blue eyes, a magnetic personality, and a sense of humor that would leave anyone in stitches.  As one person put it, he was larger than life, but he was also just a regular guy.”

His son, Lincoln Brown, who was born when his father was governor, recalled when he was eight years old and couldn’t figure something out.  “He looked me straight in the eye and said, ‘Brown, what would you do if the Russians were coming? Figure it out!’ He said it a hundred times during my life.  He also taught us about integrity, saying, ‘Lincoln, there’s the truth and the real truth. I want the real truth.’”

Brown’s business ventures included purchasing Kentucky Fried Chicken from founder Harland Sanders in 1964, which he turned into a worldwide success, and sold his interest in the company for a huge profit in 1971.

During the 1970s, he also owned the Kentucky Colonels of the American Basketball Association, as well as two NBA teams, the Boston Celtics and Buffalo Braves (now the Los Angeles Clippers).

When he ran for governor in 1979, his motto was “Run the state like a business.”

Brown is being laid to rest at the Lexington Cemetery.