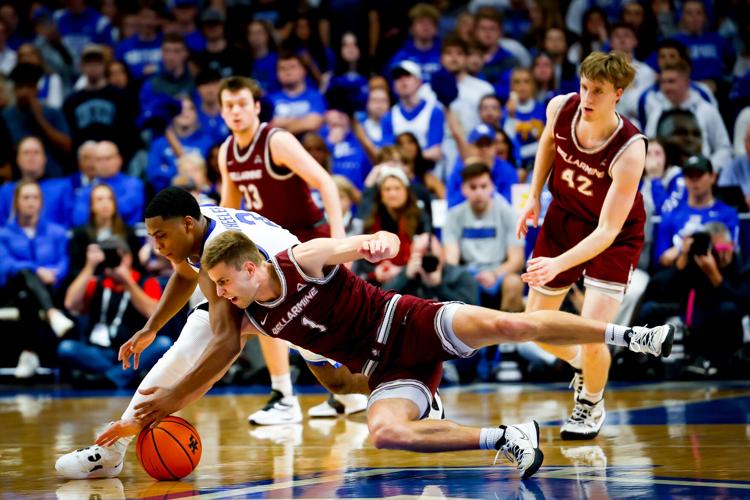 Visiting Bellarmine battled Kentucky to a draw in the first half before the Cats pulled away late in the second period. (Photo by Les Nicholson/Kentucky Today)

The Knights, wrapping up an unprecedented nine-day tour that included stops at Duke and UCLA and concluded with a first visit to Rupp Arena, gave the 19th-ranked Wildcats all they could handle before Kentucky pulled way to a 60-41 victory to remain undefeated at home.

Evidence of a hard-fought contest was found in Kentucky’s locker room as the Wildcats (5-2) fought off fatigue following a tougher-than-expected home encounter.

“That’s a hard game to play,” Kentucky coach John Calipari said. “We (had guys) cramping up in there…You had to play the whole clock (on defense). We worked the last three days on how we finish games.”

In that stack of game plans included a scheme to wear down the opposition when push came to shove, especially at crunch time.

“We went to our grind it stuff, which we had worked on,” he said. “You saw that we were grinding it out, which are, some games you’ve got to do it. That’s is what was good about the last three days. We were able to do some stuff.”

Bellarmine, which defeated Louisville 67-66 in its season-opener on Nov. 9, wasn’t intimidated by its surroundings and had the Wildcats on the ropes, leading 32-24 with 15 minutes remaining after forcing a 21-21 tie at the break.

That’s when Kentucky simply overpowered the Knights with a 23-3 run that pushed the lead to double digits and gave the Wildcats the nudge they needed to overcome the pesky Knights. Calipari wasn’t surprised by Bellarmine’s performance, especially in the first half.

“They were tied with us at halftime and we’re supposed to be one of those (top) teams,” Calipari said. “(Our) defense was really, really good…We needed to show some discipline and we also needed to grind it out.”

Kentucky guard Antonio Reeves, who led the Wildcats with a game-high 18 points, was surprised by Bellarmine’s ability to impose its will on Kentucky.

“They definitely move the ball with all the cuts they do and it’s definitely difficult to guard, and they go deep into the shot clock,” Reeves said. “Not many teams do that and we tried to do what they were doing a little bit and try to grind it out, so we could do the same thing they were doing to us.”

The Wildcats missed their first six shots from long range, but the treys came through during the decisive spurt down the stretch. CJ Fredrick knocked down two 3-pointers in consecutive fashion, while Reeves capped an 11-0 spurt with a long range jumper of his own. The Fredrick and Reeves combination provided a lift for hosts.

“He looks for me and I look for him,” Reeves said. “We get each other going as well. That was the mindset in the game.”

Although his team struggled in the opening half, Calipari was pleased with the finish.

“I liked what we did the second half,” he said. “Three turnovers. We were playing fast, grinding it out. Every team that plays us, they have nothing to lose — everybody. You’ve got to play that way and play like you have nothing to lose or you’re at a disadvantage in every game you play.”

The Wildcats did just that when it mattered the most.