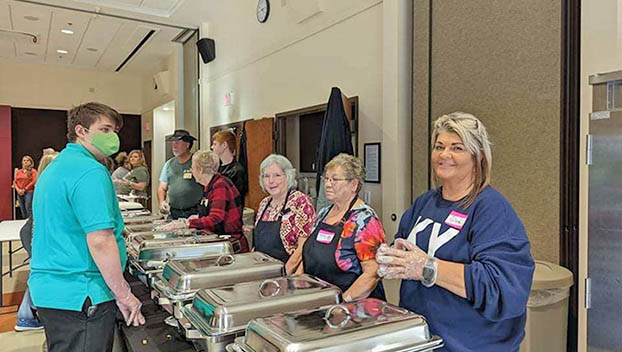 The Thanksgiving meal put on by the JCHC grew so large that organizers eventually asked if they could use space at the public library. (Photo submitted)

Before last year, the Jessamine County Homeless Coalition (JCHC) would host holiday dinners in its emergency shelter. But, Johnny Templin, the Executive Director of the JCHC, said even serving 100 people in that small space didn’t cut it.

“One time, we even rented a tent and threw [it] outside to keep people where they could sit down and try to eat with a little dignity,” Templin said.

That was the breaking point for these holiday dinners. In 2021, Templin asked the Executive Director of JCPL, Ron Critchfield, if JCHC could use the library’s community spaces for Thanksgiving.

Critchfield welcomed JCHC to use the space. Templin didn’t think he and his 80 volunteers would succeed.

JCHC and its volunteers served 600 pounds of turkey and 340 meals, including the Creekside Apartment Complex residents, to whom the organization always delivers meals during its holiday dinners.

“Last year was not a deficit to us, although it was a $500 gamble.” Templin said, “I spent $200 and had approval. I spent another $500 to make it happen. The day after Thanksgiving, a $500 donation came earmarked to cover the thanksgiving dinner. Last year was cool.”

Thanks to a new marketing team this year, the Thanksgiving Dinner is fully funded and ready for Templin’s estimate of 500 meals.

Three main donors have funded the dinner. Christ Embassy, which Templin has attended since 2015, donated $1,000, which paid for most of the food. To come up with the 750 pounds of turkey, JCHC received half of the turkeys from Shainey Marcus, the homeless liaison for Jessamine County Schools, and half from Reverend Moses Lee Radford at First Baptist Church.

Volunteer sign-up forms for the event have closed now that JCHC and JCPL have racked up 140 community helpers. Library staff will offer more than just the space this year.

“We have a couple of staff members who are gonna volunteer. I’ll be here as well,” said Kimber Gray, the Marketing and PR Coordinator at JCPL. “Each of us feels strongly about it, so we’ve recruited. It’s definitely something that we have taken to heart, and we are proud to do. We are all hands on deck. More than just a venue, we are definitely fully realized partners at this point, and we are really happy to do that.”

Kimber said that the library was happy to be asked by Templin to help with the event in 2021, as well.

“There is nothing but neutral ground here at the library. Privileges are extended to everyone regardless of socioeconomic level or background. So, from my perspective, it made sense for it to happen here because we are a community gathering space across different perspectives and a variety of people from all different walks of life.” Kimber said.

Residents can attend this free Thanksgiving dinner on Wednesday, November 22, from 4 p.m. to 7 p.m. at the Jessamine County Public Library on 600 S Main St.

Besides holiday dinners, anyone, regardless of if they’re staying in a four-day bed at the emergency shelter, is allowed to use JCHC facilities located on 218 North Maple Street.

Daily meals are offered from 7 a.m. to 8 a.m. for breakfast, 12 p.m. to 1 p.m. for lunch, and 6 p.m. to 7:30 p.m. for dinner. The laundry facility is open to the public every night from 5 p.m. to 7 p.m. The limit is one load per household. Visitors must stay at the shelter for the entire laundry cycle. Community showers are offered depending on shelter availability from 9 a.m. to 6 p.m. daily. The shelter is also used as a cold weather shelter once windchill is reported to be 19 degrees Fahrenheit or lower. Nightly check-in is open from 7:30 p.m. to 11 p.m. Cold weather shelter visitors must keep their personal belongings locked in a secure room until 8 a.m. the next day and must abide by shelter rules.