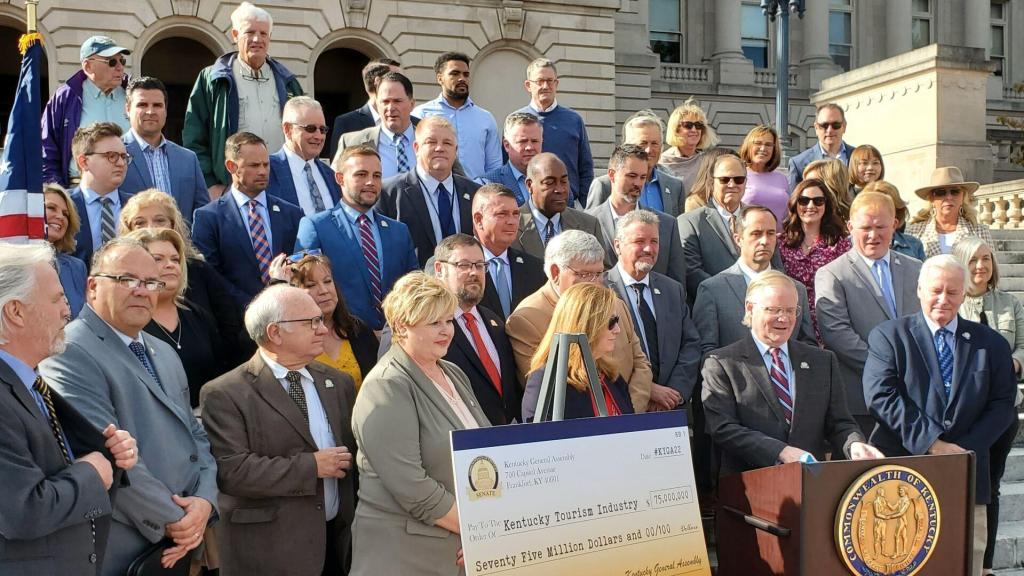 State Senate Majority Floor Leader Damon Thayer, R-Georgetown, was joined by fellow lawmakers Thursday on the front steps of the State Capitol for a ceremonial presentation of $75 million to representatives of Kentucky’s tourism and travel industry.

The money, which Thayer convinced his colleagues to include in this year’s state budget, is designed to help with marketing the tourism industry, traditionally one of Kentucky’s largest sectors, as it recovers from the COVID-19 pandemic.

“What we did during this legislative session affects every corner of this state,” Thayer said, noting that tourism took a big hit during the pandemic. “During the 2021 interim, the Kentucky Department of Tourism provided lawmakers with an update on tourism’s economic impact on Kentucky. We learned that our $12 billion tourism industry took a 26% hit, as a result, falling below $9 billion.”

He noted the action came after tourism officials pointed out they were eligible for federal ARPA funds, so he fought to have it included in the state’s two-year spending plan. “Our message to the tourism industry from the Kentucky General Assembly is, help is on its way.”

Hank Phillips with the Kentucky Travel Association said the money will be used in a variety of ways. “A portion will be spread across the state, allocated to our local tourism commissions. They are the ground troops in promoting and marketing the multitude of reasons people should come to Kentucky.”

He said another portion will be spent to market Kentucky as a whole. “That’s the responsibility of the Kentucky Department of Tourism, a mission that is superbly carried out by them.”

Part will go to help to revitalize the meetings, conferences, and convention sector. “This is the hardest hit part of our hard-hit industry,” Phillips said.

Some will be used for what he called, “Collaborative, multi-destination marketing initiatives.”

Phillips added, “Early in the process, Gov. Andy Beshear arranged for approximately $13 million to be provided to the tourism industry. When Sen. Thayer and his colleagues came forward with the $75 million package, the Governor endorsed it.”