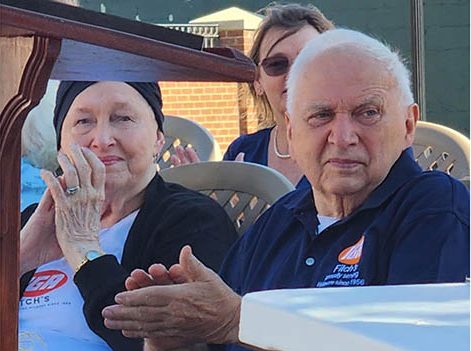 On Sunday afternoon, hundreds of area residents gathered on East Main Street in Wilmore for the naming and dedication of “Fitch’s Square”.  Located just off E. Main St., the area is bordered by seven businesses, the longest in operation being Fitch’s IGA, operated by Leonard Fitch. The naming recommendation was submitted by the Wilmore Community Development Board to the Wilmore City Council which approved it.

John and Jesse Fitch arrived in Wilmore in late 1956 with their family of six children to open a grocery store and to send their children to Asbury College. Now in its 65th year of continuous operation and with four generations participating over the years, Fitch’s IGA has been a mainstay in the Wilmore community.

Mayor Harold Rainwater issued a proclamation declaring Sept. 25 to be a day of “Dedication of Fitch’s Square”,  presenting copies of the proclamation and keys to the city to the many Fitch family descendants who were present. A floral bouquet was presented to Mrs. Emily Fitch. The signage and landscaping rock with bronze plaque, situated under the tree of the entry island to Fitch’s Square,  was unveiled by designer Vince Lewellen.

Additional comments were made by Linda Griffin, President of Highbridge Springwater, regarding the relationship her company had with IGA and the Fitch family in the very early years.

Mr. Daryl Evans, representing Laurel Grocery, traveled from Nashville to present a large display board of congratulations and pictures from that supplier.

Following the ceremony, the crowd were served refreshments and enjoyed a time of community.