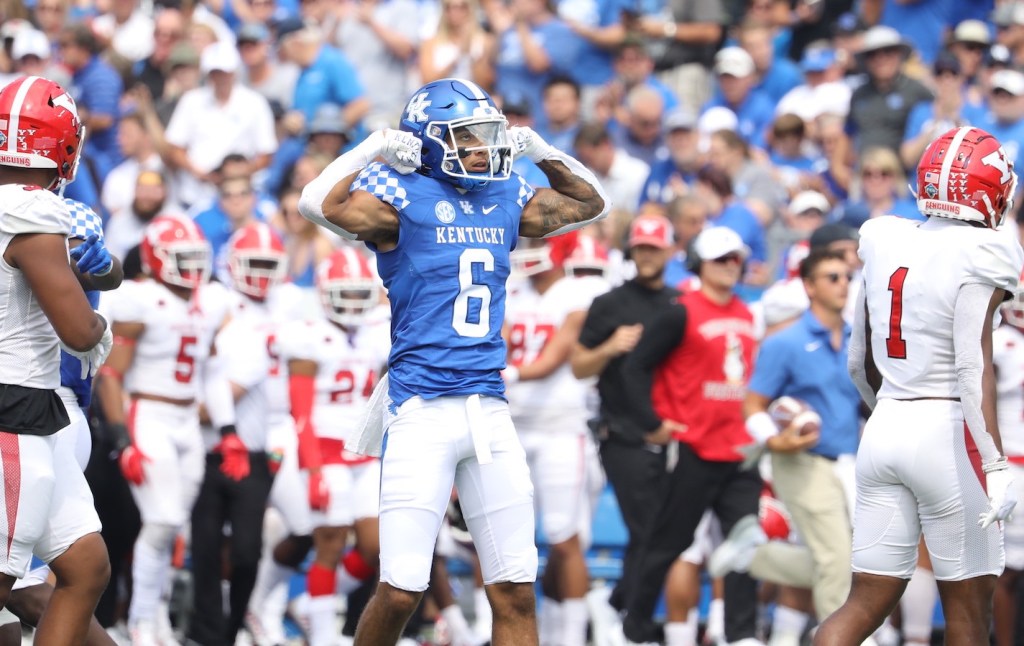 University of Kentucky Hall of Famer Keenan Burton didn’t know a lot about freshman receiver Dane Key when he saw him play his first game for UK this season.

However, it didn’t take long for Burton to realize the 6-3 Key was “special” and possibly destined for greatness at Kentucky.

“His poise just jumps out. I was in Lexington a few weeks ago and got a chance to meet him and talk to him,” said Burton, who lives in Louisville. “He is so humble but yet so locked in.

“He reminds me a lot of how I was. Bright-eyed, excited but knowing my time is now. Not in an arrogant way but just knowing this is my time. That’s what I see when I watch him.”

Burton ranked fourth in school history in pass receptions (189) and second  in both receiving yardage (2,376) and touchdown catches (25) when he finished his UK career in 2007. He also set a UK career record for kickoff return average — 25.6 yards per attempt. Burton put those numbers up despite a wrist injury in 2004 and foot injury in 2005.

Key is off to a fabulous start. He had touchdown catches in his first three games, including a 55-yarder at Florida, that tied the freshman school receiving touchdown mark and he just missed making a 60-yard touchdown catch against Northern Illinois last week. He has 15 catches for 241 yards – 16.1 yards per catch – in the first four games.

“His play is very sure. He has great hands, runs great routes,” Burton, a 2008 fourth-round draft pick by the St. Louis Cardinals, said. “He’s big but he’s composed. I really have not seen anything like him at Kentucky.”

Burton not only played with some terrific players, but he’s watched Kentucky football for over 20 years and understands how difficult it is to have the success Key is having so quickly.

“You could see that in Randall (Cobb), but he was not a receiver. He was a quarterback (when he came to Kentucky),” Burton said. “He just has it. I don’t know why he has it. I don’t really say a lot about anybody specifically. He just has all the tools.”

“Like with me, I always played with a lot of pressure and expectations. I was always expected to do well and that drove me. I sense the same thing with him,” Burton said. “I see him and you can tell he has prepared himself and put the work in.

“With preparation comes confidence. He knows this game is precious. Nothing is promised to anybody. From what I see with him, even on a big play or big catch, there’s no arrogance. It’s more like he knew it was something he was supposed to do.”

Burton thinks getting off to a big start, especially with the touchdown catch at Florida, helps build needed confidence. He still remembers his first touchdown catch against Louisville in his first UK game in 2003 on a pass from Jared Lorenzen.

“That set the tone that maybe this was not as hard as I thought it would be,” Burton said. “I knew there was still work to be done but I liked that feeling. When he made that first touchdown catch (against Miami of Ohio), it got the first one out of the way.

“When he got one at Florida, then he knew this was his time. He knew he belonged here and this is what he was supposed to do and he can do it at a high level. It’s just the beginning for him. I can’t wait to see what is next.”

Burton said Burton will go through spurts that likely will include some drops this season.

“We all have that. It happens to every receiver,” Burton said.

However, Burton has no doubts about what lies ahead for Key, the son of former UK linebacker Donte Key.

“He’s going to break all the Kentucky records. No. 9 (Key) is just going to be very, very special.”