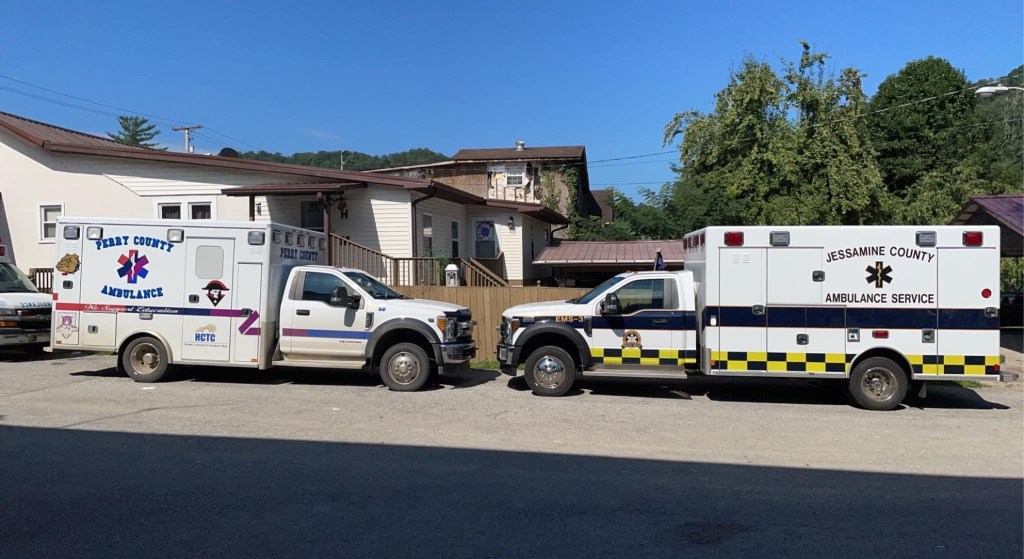 The ambulance full of supplies went all the way to hard-hit Perry County. (Submitted photo)

Jessamine County EMS employees contacted folks from affected counties to organize a list of their most needed items. For four hours, EMS waited outside the Nicholasville Walmart to fill one ambulance vehicle with donations from residents.

“When something happens to someone or a community, all communities should step up and try to help if they can,” said EMS Lieutenant April Jenkins. “That’s just really how we felt like we needed to do something.”

The ambulance filled, and the goal was met. Jessamine County EMS employees drove to Hazard, Kentucky, within 24 hours of the event on Wednesday, August 3, and gave out these donations to people in need. The vehicle was so full that emptying the ambulance took three pallets, four large wheelbarrows, and two rolling carts.

Judge Executive David West said there are no plans to revisit Eastern Kentucky with another “Cram the Ambulance,” as FEMA and many other volunteers are already out there. However, he did say that if asked for more help, volunteers from Jessamine County would return.

“This is more of an observation, but there are so many efforts, it sometimes gets confusing. So we just want to make sure that where we’re taking supplies are actually needed. So, usually, we contact more of a local person than a national organization. I know we’re in contact with a few of the extension offices that need hay, and I believe we’re gonna have an effort next week to take some hay up to some Eastern Kentucky counties, but we’re just formulating that right now,” said Judge West.

There are still ways to help those in Eastern Kentucky. So many folks have lost everything they have. GoFundMe has a page of verified campaigns by Eastern Kentucky survivors: www.gofundme.com/c/act/flood-relief/kentucky.

“You step into a surreal world at that point. We come together as a community in those times of crisis. I think it’s a truer picture of the human condition than we realize,” Said Judge West.