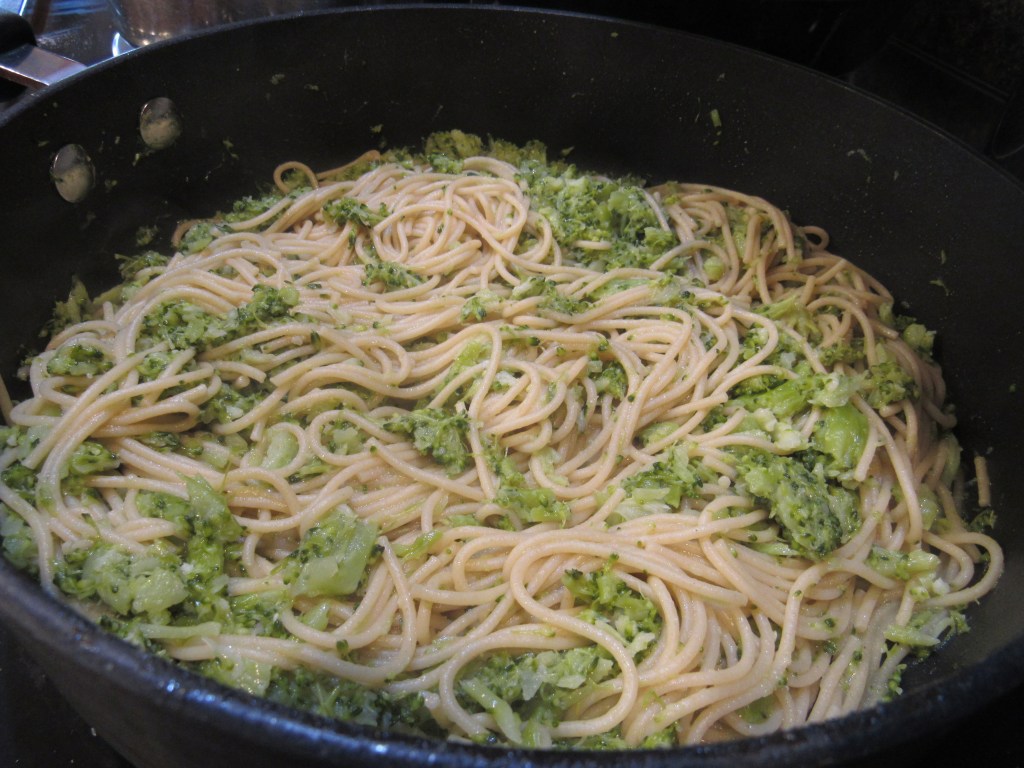 While looking through a recent issue of Food Network Magazine, I ran across a short article titl•ed “Adventures in Broccoli.” The recipe developer, Khalil Hymore, said, “Overcooked broccoli takes on an almost cream texture,” and the article’s author stated after trying this recipe, “you may never go crisp-tender again!” Well, with those words, I had to give one of the three (broccoli gratin, broccoli pasta, and broccoli frittata) recipes a try.

I opted to give the pasta recipe a try that night. We had all of the ingredients needed, and besides that, I had some steamed broccoli leftover in the refrigerator. I figured I could steam it a little bit longer (I steam my broccoli in the microwave), and the dish would be ready fairly quickly.

I didn’t have a pound of broccoli left over from the night before, but I had enough to half this recipe.

Besides that, 12 ounces of spaghetti would be too much for Brad and I at one time; especially since Brad’s not real crazy about pasta because of the calories.

Early that evening, I began preparing supper, and the first thing I did was put a pot of water on to boil for the pasta. Next, I placed the broccoli into the microwave to steam a bit longer. I steamed it until it was soft but not totally mushy. I added the butter, salt, and pepper and mashed the broccoli with a fork. At this point, the spaghetti was almost ready.

While the spaghetti finished cooking and the broccoli was sitting on the counter, I cooked the minced garlic in some olive oil and butter and then added the mashed broccoli and freshly grated parmesan. All I had to do now was wait for the spaghetti to finish cooking. Once done, I added some pasta water to the broccoli mixture. The dish looked good as I added the spaghetti and a little more salt and pepper.

We sat down at the table to eat, and after Brad prayed, thanking God for all he blesses us with, we began to eat.

We both put a pretty good helping of Broccoli Pasta on our plates and began to eat. The first thing I noticed was there wasn’t enough salt in the dish for me, so I sprinkled a little more on. Then I noticed the dish really wasn’t that great – and Brad agreed. So I sprinkled on some parmesan cheese, thinking that might help. Nope, it didn’t. We kept eating, wondering what would help this dish. The only conclusion I could come to was nothing could help it.

We eat a lot of steamed broccoli at our house, and I really like pasta, but this dish just didn’t measure up and falls into the “Failed It” category for me. Maybe the other soft broccoli recipes would be ok, but

I’m not going to bother trying them. In the future, I’ll just stick with regular steamed broccoli.

• Set up a steamer basket in a 3-quart saucepan. Add enough water to come up to the bottom of the basket. Bring the water to a boil. Add the broccoli florets to the basket, cover and cook until the broccoli is soft and nearly falling apart but still holds its shape, about 15 minutes.

• Transfer the broccoli to a large bowl. Add the butter and gently toss; season with salt and pepper.

• To make Soft Buttered Broccoli: Mash the steamed broccoli and set aside. Cook 12 ounces spaghetti; reserve 1 cup cooking water, then drain. Cook 2 minced garlic cloves in 2 tablespoons each olive oil and butter in a large skillet, 30 seconds. Add the mashed broccoli, 1/2 cup grated parmesan and half of the reserved cooking water. Cook, stirring until saucy. Season with salt and pepper. Toss with the spaghetti, adding more cooking water as needed.