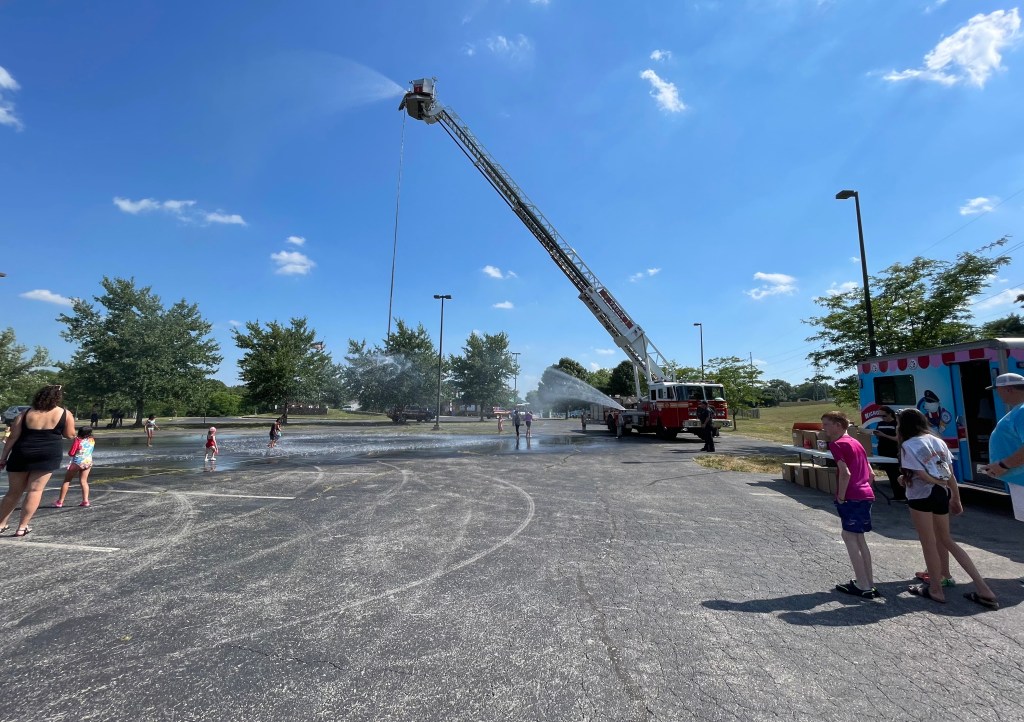 The Nicholasville Fire Department and Police Department teamed up on Wednesday, June 22, to host a community cool down at the Riney B. Aquatic Center.

The fire department hoisted a water hose from the crane on the firetruck and had water spinning like a sprinkler for kids to play in.

The Copsicle truck was parked right next to the fire truck, giving out snacks and popsicles for those who attended.

“[We] reached out to the Chief Justice, the P.D. and they were all about it with the Copsicle truck and it’s just an opportunity for the kids in the community to come out and play a little, see the fire truck set up.” Assistant fire chief, Marty Kazsuk said. “It can make it fun for them and they’ll get a popsicle and cool down, and just enjoy the afternoon.”

Kids and parents from all over Nicholasville came to play in the water, enjoy some popsicles and cool down from the hot weather. The local pool has been closed due to mechanical issues, and this is a way to cool down the community during an unseasonable run of hot weather.

“It’s nice to live in a smaller community like this, where they do fun things like this, especially with the pool being closed … It’s nice to be able to do this, and not be stuck inside the house.” Amy Latimer said.

The Nicholasville Police Department came up with the idea for the Copsicle truck last summer, and it has made its way to several events this summer alone.

“We were contacted by the Fire Department, they had seen this advertised in another city somewhere and decided to see if we could collaborate together,” Sgt. Kevin Grimes of the Nicholasville Police Department said. “Here we are today, having an outstanding day with this fancy water hose and these Copsicles here, and some other things donated by some other people, just a great day.”