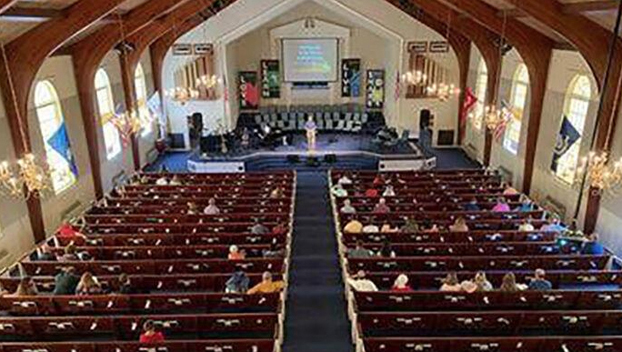 Gov. Andy Beshear on Tuesday signed into law a measure that keeps government from restricting religious services during an emergency beyond those imposed on other organizations. (Kentucky Today file photo)

FRANKFORT – Legislation that would keep a governmental entity from banning religious services during an emergency to a greater extent than imposed on other organizations or businesses that provide essential services, was signed into law by Gov. Andy Beshear on Tuesday.
The sponsor of House Bill 43, Rep. Shane Baker, R-Somerset, calls it a measure to protect religious liberty, and is the result of restrictions imposed during the COVID-19 emergency.

Legislators have a number of measures that are awaiting Gov. Andy Beshear’s signature to become law. He signed HB 43 on Tuesday that makes churches essential during a state of emergency. (Kentucky Today file photo)

“In March 2020, the Beshear administration issued an executive order that prohibited mass gatherings,” Baker told his colleagues during debate on the House floor. “It included faith-based organizations, but said gatherings in shopping malls, office environments, factories, retail and grocery stores, as well as gun stores, were not prohibited.”

He called the action “a direct assault on our God-given rights, that are protected in the Constitution.”

“This is a great victory for religious liberty in Kentucky,” he said. “We are grateful for our legislators bringing this bill forward and for Governor Beshear signing it into law.”

“The Church is Essential Act is a victory for religious freedom in our Commonwealth,” said David Walls, executive director of The Family Foundation. “Thanks to HB 43, churches will rightfully be recognized as essential in Kentucky, and the governor’s emergency powers will never again be abused to shut down churches or discriminate against religious organizations.”

The only person speaking against the measure was Sen. Karen Berg, D-Louisville. While she said she could agree to the first two provisions, she could not support the third.

“Opening up to where we could sue our state over this just doesn’t make any sense to me, whatsoever.”

Berg added, “I too am extremely religious, and somehow my congregation was able to maintain services online, with in-person communication to those congregants who needed it throughout the entire pandemic with very little interruption to our congregation. So, it is doable.”

The bill contained an emergency clause, so it took effect as soon as the governor signed it.