Sunday’s prayer vigil had a message: ‘Yes to Life’ 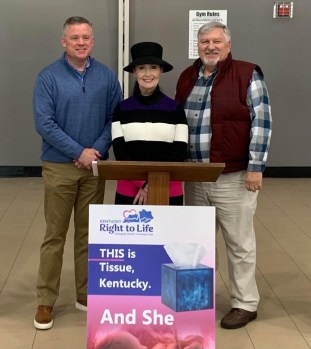 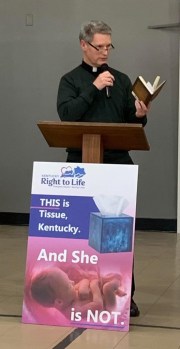 A recent Prayer Vigil for Life had a message: “Yes to Life.”

Held Sunday at Faith United Community Church, in Nicholasville, the event honored the sanctity of all human life from the womb to the tomb.

It provided an opportunity for pro-life supporters who were unable to attend the national March for Life on Jan. 21 to gather locally to pray for an end to abortion and to pray for the United States of America.

Abortion is the fruit of what has been sown for a long time, said Greg Williams, president/CEO of Love and Lordship Ministry, who served as the keynote principal speaker.

“When I was asked to speak on ‘Reaping What We’re Sowing,’ it became immediately evident that people were beginning to hear the message that abortion is the fruit of what has been sown for a long time,” he said.

His Lexington-based ministry presents a “Biblical approach to relationships, sexuality, marriage and family and the impact we are called to have in and through Christ’s Church,” the organization’s website says.

“We desperately need to continue to stand and vigilantly fight against the evil of abortion and the taking of innocent life but we must look and work at deeper levels,” Williams said. “God has told us in His Word (Galatians 6:7-9) — ‘Do not be deceived, God is not mocked; for whatever a person sows, this he will also reap. For the one who sows to his own flesh will reap destruction from the flesh, but the one who sows to the Spirit will reap eternal life from the Spirit. Let’s not become discouraged in doing good, for in due time we will reap, if we do not become weary.’

“We can’t paint an apple orange and call it an orange and that’s what we’ve done for so long in our culture and even many of our churches,” he continued. “We tell people what they want to hear and they keep coming back but they Law of the Harvest tells us plainly that the fruit will reveal the seeds that are sown and God is faithful and will not be mocked.”

Williams noted that abortion is the fruit of the seeds of sexual immorality and relational brokenness.

He called for the community do more than teach and preach and to build relationships of accountability. Citizens were urged to model these relationships and share them with others.

“God never intended for communities and systems to guide us but to protect what we are sowing and building in our hearts, homes and relationships,” Williams said. “Only when we change hearts and homes in marriages and families … and then in the churches, will we begin to see good seeds sown and the good fruit of loving relationships and homes, as well as strong churches that can stand against the lies, deception and bad seeds of porneia and sexual immorality and subsequent bad fruit of brokenness, disease, and abortion.”

Other activities during the vigil include a Legislative update by State Representative Matt Lockett (R, District 39).

“The number of abortions are rising in Kentucky, a trend that we don’t want to see,” he said. “This prayer vigil raised awareness of the issue and made a call to people of all faiths to pray for the end of this atrocity in the United States.”

Lockett said he remains optimistic that the US Supreme Court will overturn Roe v. Wade.

“I am optimistic that the Supreme Court will overturn Roe v. Wade. If they do so, they will probably send the issue back to the states to be decided on a state level. In Kentucky, we have worked hard to ensure that if this happens, we will be ready and enact strong pro-life legislation.”

Lockett said citizens have an opportunity to make their voices heard about the issue in November.

“This November, every Kentuckian will have the opportunity to vote on a KY Constitutional Amendment that says the KY Constitution does not guarantee a right to an abortion,” he said. “I encourage everyone to vote YES for life in November!”

The sponsor of the vigil was a local chapter of Kentucky Right to Life. Right to Life of Central Kentucky was incorporated in 1972 as a nonsectarian nonprofit, which receives no government funding. Its mission is to restore legal protections to human beings whose lives are threatened by abortion, infanticide, involuntary euthanasia and physician-assisted suicide.

Vigil included a college campus update by Jordan Moorman, regional coordinator of the Kentucky and Ohio, Students for Life of America. American Heritage Girls Troop 356 were scheduled to host a Hot Chocolate and Cookie Social.

Diana Moldonado, president of Kentucky Right to Life, said the vigil makes a difference and has an impact. More than 100 people attended Sunday’s vigil.
“We are always happy to hear the comments from people who attend the vigil for the first time,” she said. “It impacts them in such a way they become determined to do what is in their power to do – becoming the change that is desperately needed to make a significant difference in the culture in our country. The Prayer Vigil is an opportunity to gather in prayer and fellowship with others who support life.  Those who attend become more informed on the issue and learn what organizations like Right to Life and the 50-plus Pregnancy Care Centers throughout the state are doing to help Moms and Dads choose life. “
This year marked the 16th year Right to Life of Central Kentucky has hosted the Prayer Vigil for Life.  The date is always set for the Sunday before the Monday that is Dr. Martin Luther King Day in January.
“Since not everyone can travel to Washington DC to attend the annual March for Life, which was started in 1974 by Nellie Gray in response to the Supreme Court ruling legalizing abortion,” Moldonado said. “It’s especially important for local communities to hold vigils to mark the human cost of abortion.”
Moldonado said to date more than 63,459,791 babies have been killed through abortion since January 22, 1973.
“It is incomprehensible that America has allowed abortion to continue for 49 years,” she said. “This holocaust represents the unprecedented and senseless loss to all of humanity of each singular, unique and irreplaceable human life.”
Moldonado said she is optimistic about the Supreme Court potentially overturning Roe v. Wade.
“Yes, because the Mississippi case currently before the court, Dobbs vs. Jackson Women’s Health Organization, has been called the most significant case on abortion in 30 years,” she said.  “Pro-life people are very optimistic this case will overturn Roe vs. Wade and return the issue of legal abortion back to the states.”
Moldonado said before the 1973 decision overturned laws in all 50 states, each state had their own law on abortion.  Roe was called a mistake from the time it was passed until now.  Moldonado said even liberal justices who supported abortion rights like Justice Ruth Bader Ginsburg said the Roe decision was too sweeping and vulnerable to attacks.
“In a lecture at New York University in 1992, Ginsburg said Roe v. Wade tried to do too much, too fast because it essentially made every abortion restriction in the country illegal at one fell swoop – leaving it open to fierce attacks,” she said. “But abortion has been legal for almost 50 years in America and the right to kill enshrined by the law has changed our nation beyond recognition.”
Moldonado said what is at stake is the constitutionality of a 2018 Mississippi state law that bans abortions after the first 15 weeks of pregnancy.  She said the case explores the viability standard, set forth in the 1973 Roe v. Wade decision, permitting abortion until the unborn child can survive outside the womb.  Pro-life advocates are hopeful that the case will increase the authority of the states to enact laws limiting abortion pre-viability.
In Kentucky last year, the General Assembly passed House Bill 91, the “Yes for Life” constitutional amendment, which will prevent rogue judges from suddenly finding a “right” to abortion and a “right” for abortions to be paid for by Kentucky taxpayers, in the state constitution.
“The decision by the high court is expected by the end of June,” Moldonado said. “If the Supreme Court overturns Roe v. Wade, the abortion issue will return to each state to decide abortion law.  Kentucky is in front of the issue by passing a bill that will put a constitutional amendment on the ballot in November.”
News correspondent Nicole Bowman-Layton wrote this for the Jessamine Journal.