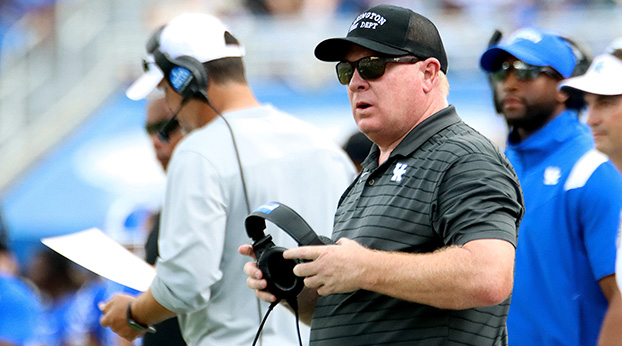 Suffice it to say, Kentucky has closed the gap in its rivalry with Tennessee.

For the longest time — 26 years to be exact — the Volunteers never lost to the Wildcats no matter when or where the two teams played, be it Knoxville or Lexington. The constant playing of “Rocky Top” was like fingernails on a chalkboard to UK fans.

From 1985 to 2010, Tennessee owned the series between the two border rivals even though the Wildcats came close in 2006 and 2007, losing both games by a combined margin of seven points. It wasn’t until 2011 when the Wildcats ended the losing skid with a 10-7 victory in Lexington. It took a heroic effort from receiver-turned-quarterback Matt Roark to keep Joker Phillips’ tenure as coach alive for one last season.

Since that time, Kentucky has collected two more victories — one at home and another away. UK coach Mark Stoops picked up his first win against Tennessee with a 29-26 victory in 2017, but the biggest achievement came a year ago when Kentucky pounded the Vols 34-7 for its first win in Knoxville since 1980.

Following the Volunteer dominance, the series is a rivalry again as the two teams have split the past four games. Last year’s blowout provided a lasting memory for the Wildcats and was late offensive coordinator John Schlarman’s last game before he lost his battle with cancer. He was awarded the game ball and it was one of the most memorable wins of his career as a coach and a player.

Coach Phillip Fulmer never lost to the Wildcats but, since 2008, Tennessee has employed five head coaches and three of those coaches — Derek Dooley, Butch Jones and Jeremy Pruitt — each lost once to Kentucky in the past decade.

The Volunteers have hired five full-time coaches since Fulmer retired in 2008 and Josh Heupel will make his debut in the series Saturday in Lexington with the 18th-ranked Wildcats enjoying their best eight-game start since 1950. After winning its first six games, Kentucky has suffered two straight losses in a three-week period that includes an off week. The Wildcats lost at Georgia three weeks ago 30-13 and returned from an open date with a disappointing 31-17 loss to Mississippi State last Saturday in Starkville.

Like Kentucky, the Volunteers carry a two-game losing streak into Saturday’s contest at sold-out Kroger Field. Tennessee narrowly lost to Mississippi then suffered a blowout loss at Alabama before an open date last week.

Kentucky can clinch an outright second-place finish in the Southeastern Conference Eastern Division with a second straight win over Tennessee, a feat that hasn’t occurred since the glory days of the Fran Curci era in 1976-77. The Volunteers will look to play spoiler and gain a shot at sharing a runner-up finish in the SEC East with the Wildcats.

Both teams have plenty to play for beyond bragging rights and that’s bringing an old rivalry back to life.

Unselfishness will be big part of Kentucky’s identity