Fitzgerald will be a ‘major factor’ for Cats this season 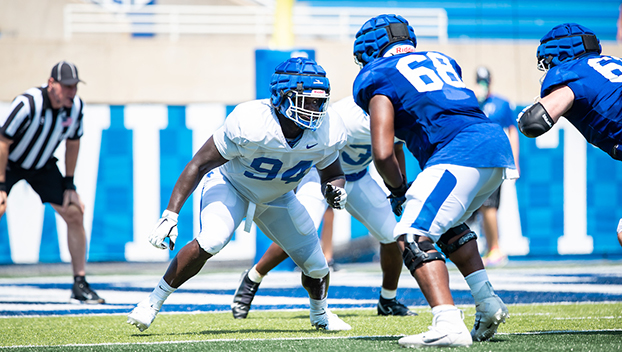 Kentucky has a lot of young defensive lineman that coordinator Brad White is counting on this year but he also says senior Abule Abadi-Fitzgerald is going to be a “major factor” for UK.

“He is a massive individual,” said White. “He is starting to understand what we are asking of those guys.”

He played in 13 games as a redshirt sophomore in 2019 and played in five games last season.

He came to the United States from Nigeria and was always a basketball player until he tried football in high school. He had 39 tackles, nine tackles for loss, two sacks, 13 quarterback hurries, two forced fumbles, and one interception as a senior in high school.

“Early on it was very developmental for him (at UK),” White said. “The big thing for him is he just needs to continue to try and stay healthy. If he stays healthy, he is a guy who is going to be able to help us.”

“They are all making strides and coming into their own,” White said. “Each has to find some sort of niche. They are all unique and different in their own way. Throw in Kahlil who has got length and a little twitch in his body that you want. He’s a young pup but both he and Jamarius are what you are looking for. They step off the bus and look like SEC linemen.

“Coach (Anwar) Stewart hammers these guys on technique and they are all so much sounder. (Senior nose guard) Marquan McCall has been such a great leader and pushing and demanding so much from all of them.

That’s why I feel we can roll bodies in and not lose all that much.”