UK’s Castle is intense on the golf course 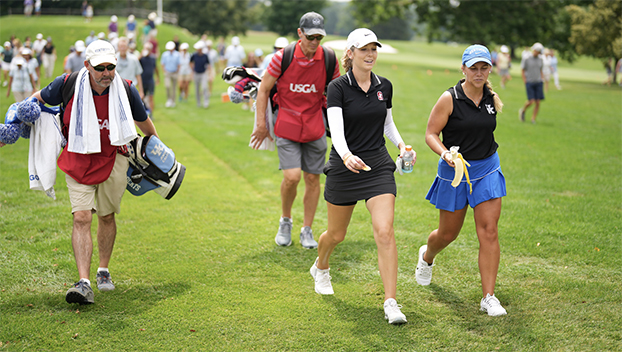 Kentucky has a lot of intense athletes on campus but none more intense than junior golfer Jensen Castle.

She needed every bit of that intensity recently during her terrific run to win the U.S. Women’s Amateur championship — something no other UK golfer had ever done. She had to overcome a stress fracture in a rib that had limited her playing time, a 12-player playoff to get into match play and then had to beat three of the nation’s best players to take the title. She also spent several nights sleeping on an air mattress at the home of a friend’s friend because she had not made hotel arrangements for more than three days.

Seldom did she smile during the eight-day competition, including when she made the winning putt in the title match.

“Everyone gives me crap for my resting face,” Castle said when asked about her game face on the course. “It’s just very … it’s just there, and I’m very aggressive and blunt so it doesn’t go together very well.

“But I promise I’m friendly. I mean, I’m very competitive on the golf course. That’s only over top of the ball. I like to have fun, cut up, laugh. When I’m over the ball, we’re here for one reason. This is business. Get it done.”

Castle insisted “she smiled more” than what the TV cameras probably showed during the tournament.

“The only time I was not smiling was when I was over the ball,” she said. “I swear I am friendly.”

She will be playing in the Curtis Cup representing the USA in Wales later this month and also has a spot in the LPGA’s Cognizant Founders Cup Oct. 6-10 as a result of her Amateur Championship.