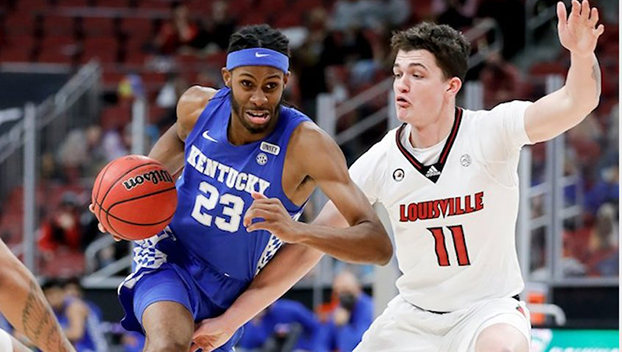 Isaiah Jackson was drafted by the Washington Wizards before being traded to the Indiana Pacers in the NBA Draft Thursday nigtht. (SEC Photo)

Isaiah Jackson heard his name called in the opening round of the NBA Draft Thursday night.

The Kentucky forward was selected as the 22nd overall pick in the draft by the Washington Wizards, following a trade with the Los Angeles Lakers. After making the pick, the Wizards traded Jackson to the Indiana Pacers.

“It’s a surreal moment,” Jackson said Thursday at the Barclays Center. “Just growing up, just wanting, like having the dream of making it to the NBA, it’s just crazy. So, this is a surreal moment for me and I’m enjoying it.

“It lived up to everything, just having my name called, getting drafted. It’s just, it’s mind-blowing. … It just feels like a dream in a way. Like, it’s just crazy right now. I’m just trying to bottle all my emotions and it’s just crazy, man.”

BJ Boston was the 51st overall pick in the second round and was taken by the Memphis Grizzlies. He was later traded to the Los Angeles Clippers.

Boston made 24 starts in 25 appearances for the Wildcats last year. He averaged a team-high-tying 11.5 points per game and his 4.5 rebounds per outing led the guards. The Norcross, Georgia, native paced the squad with 33 steals and had six games with three or more swipes. Boston reached double figures in 17 games and had two 20-point performances.

“BJ is going to use tonight as fuel and I going to have a great NBA career,” Calipari said. “I am sure of it, just as sure as I am that teams are going to look back and wish they would have taken him sooner. BJ has length, an ability to score that few have, and a high ceiling.

“He has landed with a great franchise that will give him time to grow, and my guess is we will look back in a couple of years and realize how much he was hurt this season by his hand injury and the COVID year. I know he is a special player.”

Jackson averaged 8.4 points per game last season and was named to the Southeastern Conference All-Freshman team and the league’s All-Defensive team. He led the Wildcats with 65 blocked shots and collected at least three rejections in nine contests last year.

“I am so happy for Isaiah Jackson and his family,” Kentucky coach John Calipari said. “He is just scratching the surface with his talent and is another one of our guys who is going to make a lot of teams regret passing on. Isaiah had an unbelievable spirit with us and I can’t wait to see him continue to grow at the next level.”

It marks the first time in Calipari’s tenure that just one player was selected in the first round of the draft.

Olivier Sarr wasn’t taken in the draft, but likely will get an opportunity as a free agent.

“I am disappointed for Olivier that he did not get selected tonight, but not discouraged,” Calipari said. “Olivier is a mature kid with great skills and range for a player his size. With the right opportunity, I think Olivier is going to find a spot and will have a successful career. I am looking forward to seeing who gets him because it will be a steal.”

The Detroit Pistons took Cade Cunningham as the top pick in the draft.

CLARKE HONORED
The NBA honored late Kentucky player Terrence Clarke by calling his name following the first 15 picks of the draft. Clarke’s mom, sister, and brother were in attendance.

“I want to thank Adam Silver, Mark Tatum, and everyone in the NBA office who gave Terrence’s family and all of us who loved him a special moment tonight,” Calipari said. “It shows the true heart of the league and I thank you all.”

Calipari still thinks about the former Kentucky guard who was killed in a car accident last April.

“Not a day goes by that I don’t think about him, his mom, Osmine, and their family,” Calipari said. “I can only imagine how wide that smile of his would have been hearing his name called.”