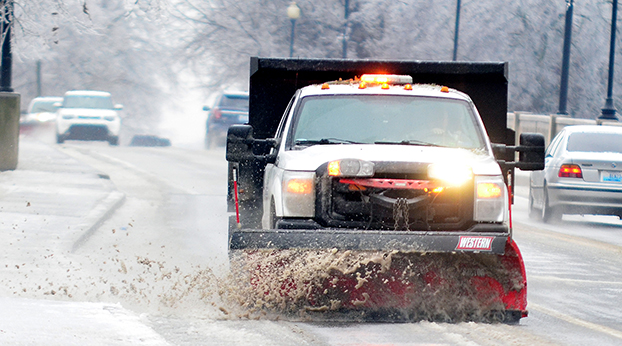 With sunny skies and temperatures in the 60s the week, the winter storms of last week may be an unpleasant memory, but for workers of the Jessamine County Road Department, it’s something they’re going to be dealing with for a while.

“It’s been hard on the roads, I’ll tell you that,” Coleman Tudor, superintendent of the Jessamine County Road Department, said. “That ice has been hard. The freezing and thawing is hard on them.”

There were three winter storms in about a week, and Mother Nature dropped just about everything she had. There was freezing rain that coated roads with ice, as well as sleet and heavy snow.

“When all that got settled down and packed in, it was hard to get it off. You couldn’t get down to the blacktop” with the plow, he said.

And road salt isn’t effective when it’s extremely cold and there’s no sun.

Tudor said his men would be through an area at 3 a.m., and when people got up later in the morning, they might not even know they had been through, he said.

He said the workers got in many hours of overtime.

Now that the ice is gone, the Road Department will have to patch cracks and potholes with what is called “cold patch.” The department has about three tons of that, he said.

Tudor said that during the snow and ice storm last week, the Road Department used about 100 tons of salt. By comparison, they used about 14 tons last winter.

“The supply got low,” Tudor said.

Even the supplier’s supply got low.

The county gets its salt from the state Department of Highways.

“We were desperately low on salt,” said Dave Carlstedt, public works and utilities director for Wilmore.

Fortunately, however, ice didn’t cause much damage to city streets, he said.

Nicholasville’s public works director, Dave Brown, said Wednesday his crew used quite a bit of road salt, but didn’t run out, and there were a few potholes, but they have been patched.