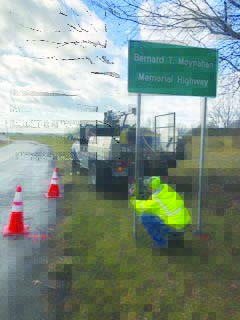 A state highway crew member installs a road sign designating a section of Ky. 1268 as Bernard T. Moynahan Memorial Highway. But the signs were apparently erected on the wrong road.

The missing road signs are no longer a mystery.

In fact, they aren’t even missing.

“They were moved to the new Eastern Bypass on Mr. Moynahan’s farm. All is OK,” state Sen. Tom Buford texted The Jessamine Journal Sunday. “That was where they were to be.”

But Natasha Lacy, public information officer for the state Transportation Cabinet’s District 7 office, said Monday the signs would have to be removed from the bypass and stored in the Department of Highways’ Jessamine County maintenance facility until it’s sorted out.

“By law, the placement of signage must match the legislative order,” she said.

And according to the legislative order, the section of Little Hickman Road from milepoints 0 to 14 were to be designated the Bernard T. Moynahan Memorial Highway, in honor of the former prosecutor and federal judge.

Buford messaged the newspaper that he didn’t know how it happened that the signs were placed on what he insists is the wrong road.

But he said that when the legislature returned to Frankfort this week, he would correct the error with new language in a Senate resolution.

The signs will then be placed near Moynahan’s farm on the new bypass, he said.

On Jan. 26, Lacy issued a press release reporting that the section of Little Hickman had been named for Moynahan, and that signs had been placed that Tuesday designating it so.

“Ceremonially naming roads and bridges is a popular tradition Kentuckians take pride in to recognize people and milestones that bring respect to the Commonwealth,” Cabinet Secretary Jim Gray, former mayor of Lexington, was quoted as saying.

“I am absolutely overjoyed to be adding Federal Judge Moynahan’s name to this highway as it runs through his farm. It is a wonderful day for the memory of a great Kentuckian and a World War II Veteran,” said Buford, a Nicholasville Republican who represents Senate Dstrict 22.

But three days later, Lacy emailed the Journal asking whether the press release had been printed yet, because “the signage has been moved,” she said.

“Our District 7 office is investigating with regard to this situation,” she said.

She later referred to the situation as an “unprecedented circumstance,” saying she knew of no other instance in which a sign of that kind had ever “disappeared” in the district.

Buford said Tuesday he was the senator who introduced the resolution to name the section of U.S. 27, but the resolution also had to go to the House of Representatives, and somewhere during the process, it was changed, and he doesn’t know how or by whom.

The senator said Moynahan was a family friend, and his father’s law office was near Moynahan’s at 200 W. Maple St., where John Tranter’s office is now.

“He and my father were extremely close friends,” Buford said.

Buford said Moynahan was a “highly intelligent man,” and when he earned his law degree, he was too young to practice.

According to the Transportation Cabinet, Bernard T. Moynahan Jr. graduated from Nicholasville High School in 1932 at the age of 13, earned a bachelor’s degree from the University of Kentucky in 1935 at 16 and a law degree from UK in 1938 a 19.

Moynahan was county attorney in Jessamine County from 1946 to 1954 and was in private practice in Nicholasville from 1954 until 1961. He was U.S. attorney for the Eastern District of Kentucky from 1961 to 1963. In September 1963, he was nominated by President John F. Kennedy to the United States District Court, Eastern District of Kentucky and confirmed in November of that year, Moynahan served as chief judge of that district from 1969 until his retirement.

A Lexington man, Matthew Elks, is facing burglary, theft and wanton endangerment charges after he led police on a stolen... read more