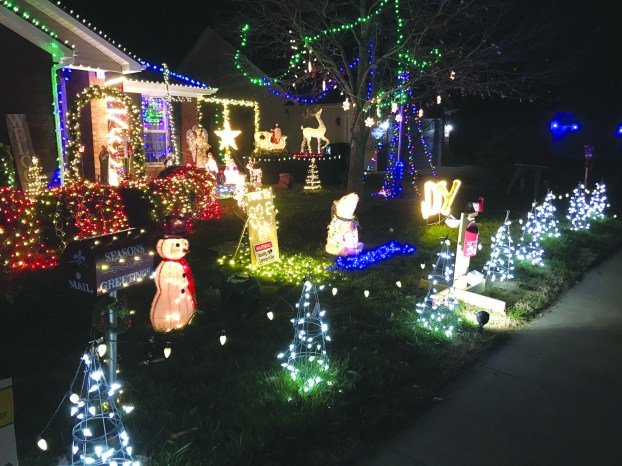 Zachary Nielson and his parents began putting lights up for this year's Wild Lights Kentucky display at their Nicholasville home in August. Nielson said they have about 600 man hours invested in this year's display. (Photo by Fred Petke)

For the last four years, Zachary Nielson has been in charge of covering his home in lights for Christmas.

This year, their home on Bernie Trail in Nicholasville is covered with strands upon strands of lights. There are signs and props in the front yard. Everything is coordinated to a soundtrack.

Nielson is the programmer, designer, DJ and electrician for the project. And he’s only 14 years old.

Nielson, a high school freshman, said he took over the exterior decorations when he was 10. Each year since then, it has grown and grown.

“I started with six channels, that’s six extension cords going to six props,” he said. “Currently I have 74.”

Nielson said he has long been fascinated with engineering and electricity, and loves Christmas. The two passions combine for the holiday display, which also serves as a collection point for Packing the Pantry at Porter Memorial Baptist Church.

So far, more than 60 pounds of food has been collected and donated to the church, he said.

Nielson said he learned how to design light shows from talking with others and from watching videos on YouTube. Others with large displays have helped him with equipment, he said.

“There’s a couple light shows in Lexington where I’ve gone and talked to the people who run them,” he said.

The creator of the software he uses, Lightorama, also has a series of videos online, he said.

Coordinating and creating the show requires months of work.

Installation of the lights began in August and continued until the show opened Thanksgiving weekend.

The work, he said, is well worth it.

“We’ve had some people come up and say it made their day,” he said. “People (have said) it’s a good way to get out of the house and do something good.”

His favorite, though, is seeing children’s reactions.

“They’re so excited to see Olaf talking or hear a song from ‘Polar Express,’” he said.

County to set up backup 911 center in Wilmore

The new Wilmore City Hall may soon be home to another agency after the Jessamine County Fiscal Court voted to... read more