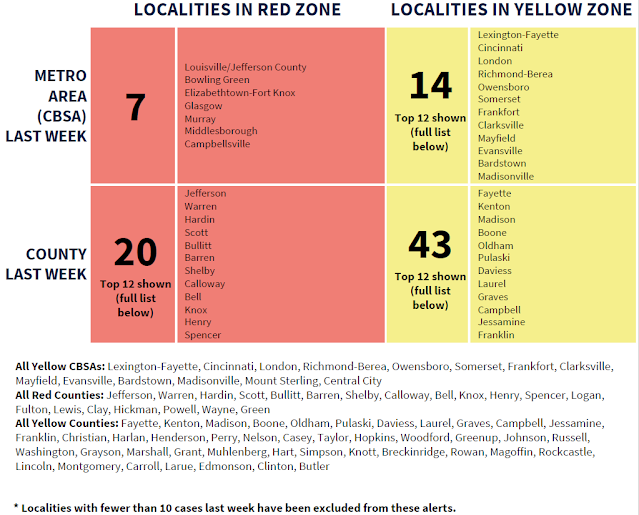 The latest weekly White House Coronavirus Task Force report on Kentucky showed an increase in both red and yellow zones last week, with the number of counties in the red zone increasing by 54 percent.

Twenty counties, up from 13, were in the task force’s “red zone” for places where new cases of the virus numbered more than one per 1,000 residents and the share of residents who tested positive for the virus during the week was greater than 10 percent.

The yellow zone is for places with new cases between 0.1 and one per 1,000 and a positive-test rate of 5 percent to 10 percent — or one of those, with the other in the red zone. The number of counties in the yellow zone has steadily increased, from 34 to 40 to 43 in the last three weeks.

Jessamine is listed has been listed as a county in the yellow zone for two consecutive weeks.

Overall, the report for Saturday, Aug. 8, through Friday, Aug. 14, showed 63 of the state’s 120 counties in one of the danger zones, 10 more than the previous week.

At 1.01 per 1,000, Kentucky entered the red zone for cases last week, and remained in the yellow zone for test positivity. Nationally, the state was ranked 17th for most new cases per 100,000 people, and 15th for the highest positivity rate.

The first one in the Kentucky report calls on health officials to conduct neighborhood testing in Louisville where positive test rates are highest, and to ensure that infected households in the state’s largest city are isolating for the full 14 days to decrease community spread.

“Our wildfire is getting more intense and it is spreading,” Moyer said at a news conference. “We’re having widespread community transmission.”

The report also recommends maintaining Gov. Andy Beshear’s statewide mask mandate, and says, “Bars must be closed, and indoor dining must be restricted in yellow and red zones.”

The governor and Dr. Steven Stack, commissioner of the Department for Public Health, said it’s better to have people drinking in bars, which can be regulated, than the alternative many have found: private parties that are impossible to regulate.

This week’s report also calls for strong public messaging that says “do not go to bars or nightclubs” in both the yellow and red zones, and adds gyms to that list for red zones.

As for restaurants, in red zones the report advises Kentuckians to order takeout or to eat outdoors socially distanced, and in yellow zones, to eat indoors only if strict social distancing can be maintained.

Beshear regularly tells Kentuckians that mask wearing is one of the most important things they can do to keep the state’s economy open, and to get all schools re-opened. The mandate also comes with some teeth, since local health departments can issue citations to businesses that don’t enforce it. The first offense is a warning, but after that, it comes with a fine of $50 for the second offense, $75 for the third offense and $100 for fourth and subsequent offenses.

The report offers several other recommendations, including one that calls on gatherings in red zones to be limited to 10 or fewer people, and to 25 or fewer in yellow zones; for Kentuckians who vacation in areas with low COVID-19 prevalence, but come from an area with high COVID-19 prevalence, to remain socially distanced, wear a mask and avoid all indoor gatherings where social distancing and masks cannot be maintained; and for those who have attended a large social gathering to get tested and says they should isolate themselves from family members with co-morbidities, among others.

Kentucky Health News is an independent news service of the Institute for Rural Journalism and Community Issues, based in the School of Journalism and Media at the University of Kentucky, with support from the Foundation for a Healthy Kentucky. For details, contact Al.Cross@uky.edu.