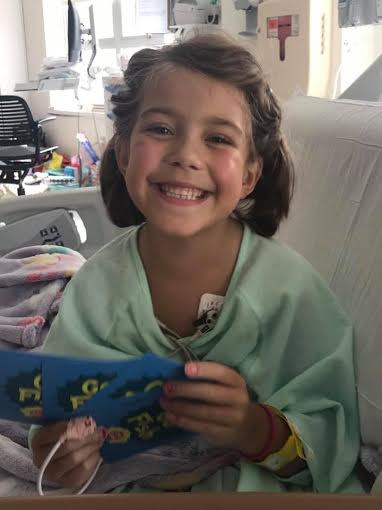 For the Jessamine Journal

The Jessamine County community will join together for a local girl named Molly and her fight with Acute Lymphocytic Leukemia in the inaugural Magical Miles for Molly 3K this Sunday.

Molly was diagnosed with Acute Lymphocytic Leukemia (ALL) after complaining of extreme fatigue and random bruising this summer.

Theresa Reynolds, Molly’s mother, said attendees don’t have to be a runner to enter the race and there’s an age group and a category for everyone. Attendees can walk, run or enter the Virtual Race. Or if they’d prefer, they can donate to the cause. Registration is open until the start of the race and all proceeds will go to support Molly, her family and their medical expenses.

ALL is a type of blood cancer that is believed to be the result of gene defects in the bone marrow. As devastating as the diagnosis was, it came as no surprise to Theresa who had refused to accept the previous diagnoses of a virus they’d been given at several prior visits to the pediatrician.

Theresa said she was prepared to hear the word leukemia because she’d been doing her own research online. While medical professionals don’t recommend Googling symptoms and making your own diagnosis, Theresa said it helped convince doctors to pursue other avenues that she felt would lead them to the correct treatment for her child. Because her mother’s intuition was correct, when the word leukemia finally came, she was prepared to hear it.

Theresa recalls her frustration at getting the correct diagnosis. “Molly wasn’t feeling well at the end of the summer,” she said. “We went to the doctor only to be told it was a virus. We went back a couple of days later and they thought she might have developed an ear infection. Then we started seeing random bruising. We knew something was up and went to our physician’s assistant at Jessamine Medical. Listening to a mom who says leukemia isn’t easy, but Erin at Jessamine Medical listened. She recommended we go to the Emergency Room.”

It was at the University of Kentucky Medical Center that Molly was diagnosed with ALL.

That night, doctors found a very large mass that was blocking her airway and laying on her heart and lung, Theresa said. She went in to have lines placed for chemo the next day.With nurses and doctors expecting a collapsed airway and the necessity of a breathing tube, Molly was wheeled into the operating room. A procedure that should have lasted two hours was much shorter than expectred, Theresa said, and Molly did not need a tube.

“The next week and a half consisted of amazing nurses and doctors caring for our baby girl and a community of supporters,” Theresa said. “We were released from the hospital after doctors placed her port and saw the mass had nearly shrunken to nothing. Remission came after the induction period of 29 days, but her journey is not over. Molly will continue treatment for the next two and a half years to keep cancer at bay.”

Statistics for childhood leukemia have improved greatly and the success rate for a cure now stands at 90 percent. Molly’s siblings include her twin Zoe, and two brothers eight-year-old Kolbe and nine-year-old Rocky. Theresa said they pray together nightly for their sister’s healing.

Theresa attributes her faith, as well as the support of her husband, extended family, and her church family at St. Luke’s for giving her the strength she needs to help her daughter in this long battle.  Her wish, is that the Jessamine County community will join them in their fight by attending the 3K race this Sunday.