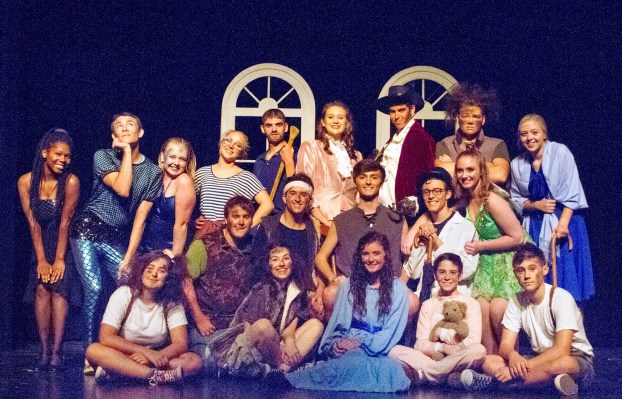 Fly away to Neverland at WJHS

Based off the original “Peter Pan,” West Jessamine High School will premiere its student-led production of “Peter and Wendy” tonight, a play also written by a former student.

With showings today, and Saturday at 6 p.m., and Saturday and Sunday at 1:30 p.m., tickets can be bought at the door for $7 for children 12 and under and $5 for adults. Tickets for the kid’s party after the matinee performances are $5 additional and $3 for adults. The party includes games, food and the kids can interact with the characters from the play.

Together, the cast and crew make up a total of 60 students, with Alex Brenner as the director and Riley Gibbs as the assistant director. Written by Quint Bosse, those who attend can be sure there will see somethings different from the original.

Bryce Osborne, who plays Peter, said he can remember watching the original movie on VHS when he was growing up and being cast in the role was like a dream come true.

“It’s not every day you get to act like a boy who never grows up, and I think that’s truly what makes embodying my character so fun,” Osborne said. “Just being able to act like a child again. Being a part of this production as a whole has been a huge eye opener for me. Not only have I been able to work with some of the most outstanding people at West Jessamine High School. But I’ve also been able to learn more about myself and what I’m capable of.”

Osborne said since day one the show’s directors have encouraged him to make up his character on his own. By doing so, Osborne believes it adds a whole other dimension to the show than some may expect.

“It also makes it way more interesting to watch,” Osborne said. “We’ve all poured so much time, effort, and dedication into this show. It truly pays off to see people come and appreciate a great show we practiced so diligently for.”

Holly Hamilton who plays Wendy said she adores being cast in the role and she is honored to act alongside the other talented student actors.

“We have all worked so hard to make this show happen and I fully believe that it is a show you’ll see once and love it so much that you’ll come back to see it again,” Hamilton said. “’Peter and Wendy’ has a little bit of something for everyone: adventure, fighting, comedy – you name it. I hope that one thing our audience will take away is to live in the present moment because before you know it the future will be here.”

Christian Campbell plays Hook, and said he had to have a bit of swagger to play the villain.

“I look to models such as Killmonger, Syndrome, and Dr. Heinz Doofenshmirtz for inspiration,” Campbell said. “This play is very comical and each actor’s own take on their character really brings the show to life”

Although the play is short, Campbell said it is packed full of all the best aspects of what some would expect from a typical Disney movie.

“With lovable darlings, fabulous mermaids, not so charming lost boys, and intimidating pirates – there’s something here for everyone – not to mention the charismatic Peter and Tink duo,” Campbell said.

Speaking of Tink, the role is played by Phoebe Boileau, who said she loves being able to jump around on stage and feel like she is light and actual fluttering around like a real fairy.

“It’s funny for everyone,” Boileau said. “Parents will enjoy it, but kids will love it too. I love being a part of any production, but this one has brought me so much closer to my fellow cast mates and tech team. This show has really turned into a family reunion and I could not love it more if I tried. We would so love for everyone to come and meet us and take a small step into Neverland.”

Moonlight Fields Wedding Farm in Jessamine County has everything from rustic to elegant By Anne Carmichael For The Jessamine Journal... read more